Three Stories (Polish: Trzy opowiesci) is a 1953 Polish drama film directed by Konrad Nalecki, Ewa Petelska and Czeslaw Petelski. [1] It is an anthology film, with three separate stories by different directors and casts. It was made in the style of socialist realism, at a time when this Stalinist method was at its height in Polish and Eastern European cinema.

Socialist realism is a style of idealized realistic art that was developed in the Soviet Union and was the official style in that country between 1932 and 1988, as well as in other socialist countries after World War II. Socialist realism is characterized by the glorified depiction of communist values, such as the emancipation of the proletariat. Despite its name, the figures in the style are very often highly idealized, especially in sculpture, where it often leans heavily on the conventions of classical sculpture. Although related, it should not be confused with social realism, a type of art that realistically depicts subjects of social concern, or other forms of "realism" in the visual arts.

The film's sets were designed by Wojciech Krysztofiak.

Ignacy Gogolewski is a Polish film actor. He has appeared in more than 30 films since 1953.

Teresa Szmigielówna was a Polish actress. She appeared in more than sixty films from 1951 to 2012.

Tomasz Zbigniew Zaliwski was a film, theatre, and radio actor.

The Polish national basketball team is administered by the Polski Związek Koszykówki. Their biggest successes are the silver medal in the 1963 European Championships at home in Poland and fourth place at the 1936 Summer Olympics.

Zmiennicy is a Polish comedy tv series completed in 1986 and aired in 1987. Many famous Polish actors appear in Zmiennicy. 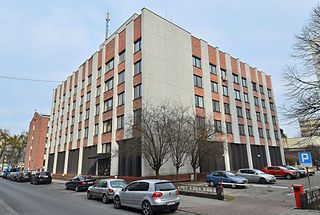 Polish Episcopal Conference or Polish Bishop's Conference is the central organ of Catholic Church in Poland. It is composed of 3 cardinals, 32 archbishops and 122 bishops.

Kisiel Prize or Kisiel Award is an annual Polish award presented in three categories: publicist, politician/public figure and entrepreneur whose actions most closely portray the spirit and beliefs of the Polish publicist and politician, Stefan Kisielewski (1919-1991).