The Three Stricts, Three Honests (Chinese :三严三实) is an internal education campaign led by the Communist Party of China advanced by General Secretary and President Xi Jinping in 2014, aimed at improving the ethical conduct of party officials and "improving political ecology". The campaign was essentially a response against perceived moral laxity in the Communist rank and file which has, over the years, according to the party itself, distanced government officials from ordinary people they were supposed to serve.

The Communist Party of China (CPC), also referred to as the Chinese Communist Party (CCP), is the founding and ruling political party of the People's Republic of China. The Communist Party is the sole governing party within mainland China, permitting only eight other, subordinated parties to co-exist, those making up the United Front. It was founded in 1921, chiefly by Chen Duxiu and Li Dazhao. The party grew quickly, and by 1949 it had driven the nationalist Kuomintang (KMT) government from mainland China after the Chinese Civil War, leading to the establishment of the People's Republic of China. It also controls the world's largest armed forces, the People's Liberation Army.

Xi Jinping is a Chinese politician serving as general secretary of the Communist Party of China (CPC), president of the People's Republic of China (PRC), and chairman of the Central Military Commission (CMC). Often described as China's "paramount leader" since 2012, the CPC officially gave him the title of "core leader" in 2016. As general secretary, Xi holds an ex-officio seat on the Politburo Standing Committee of the Communist Party of China, China's top decision-making body.

The campaign was also aimed at tackling the endemic careerism, collusion between business and political elites, rent-seeking by officials, and superficiality that became pervasive in Chinese politics. It took place in the backdrop of the wider anti-corruption campaign, creating a culture where officials "don't want to be corrupt, don't dare to be corrupt, and don't have the means to be corrupt." Since 2015, a party-wide "education campaign" began under the leadership of Xi and the senior official in charge of party affairs, Liu Yunshan, to instill these ideas in officials of all levels. [1]

Liu Yunshan is a retired Chinese politician. He was a member of the Politburo Standing Committee, the de facto top decision-making body of China, between 2012 and 2017; he was broadly tasked with the work of the party's secretariat, overseeing propaganda and ideological indoctrination, as well as party organization, in addition to serving as President of the Central Party School.

Xi initially raised the concept on March 19, 2014, at a panel discussion at the National People's Congress. [1]

The 2014 National People's Congress held its annual meeting on March 2014 at the Great Hall of the People in Beijing, China. The session opened on 5 March and concluded on 13 March.

The "three stricts" are:

The General Secretary of the Central Committee of the Communist Party of China is head of the Communist Party of China and the highest-ranking official within the People's Republic of China. The General Secretary is a standing member of the Politburo and head of the Secretariat. The officeholder is usually considered the "paramount leader" of China. 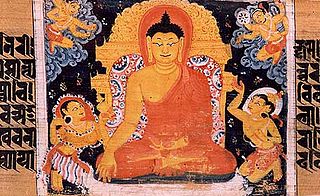 The Śūraṅgama Sūtra is a Mahayana Buddhist sutra that has been especially influential in Chan Buddhism. The general doctrinal outlook of the Śūraṅgama Sūtra is that of esoteric Buddhism and Buddha-nature, with some influence from Yogacara. There have been questions regarding the translation of this sutra as it was not sponsored by the Imperial Chinese Court and as such the records regarding its translation in the early eighth century were not carefully preserved ; however, it has never been classified as apocrypha in any Chinese-language Tripitakas including the Taisho Tripitaka where it is placed in the Esoteric Sutra category (密教部). The sutra was translated into Tibetan during the late eighth to early ninth century and a complete translation exists in Tibetan, Mongolian and the Manchu languages. Current consensus is that the text is a compilation of Indic materials with extensive editing in China, rather than a translation of a single text from Sanskrit. A Sanskrit language palm leaf manuscript consisting of 226 leaves with 6 leaves missing was discovered in a temple in China; if verified, the perennial questions regarding the authenticity of the Śūraṅgama Sūtra can be put to rest.

The mass line is the political, organizational and leadership method developed by Mao Zedong and the Chinese Communist Party (CCP) during the Chinese revolution. The essential element of the mass line is consulting the masses, interpreting their suggestions within the framework of Marxism-Leninism, and then enforcing the resulting policies.

Wang Sanyun is a former Chinese politician. He began his political career in Guizhou province, before serving in Sichuan, Fujian, and Anhui provinces. He served as Anhui governor between 2007 and 2011, and was transferred to Gansu to serve as Communist Party Secretary between 2011 and 2017. Shortly after leaving office, he was put under investigation for violating party discipline by the Central Commission for Discipline Inspection.

Corruption in China post-1949 refers to the abuse of political power for private ends typically by members of the Chinese Communist Party, who hold the majority of power in the People's Republic of China. In the reform era corruption has been attributed to "organizational involution" caused by the market liberalization reforms initiated by Deng Xiaoping. Like other socialist economies that have undertaken economic reforms, such as post-Soviet Eastern Europe and Central Asia, reform-era China has experienced increasing levels of corruption.

Qiushi is a bi-monthly political theory periodical published by the Central Party School and the Central Committee of the Communist Party of China. It is the Communist party’s main theoretical journal. The headquarters is in Beijing. 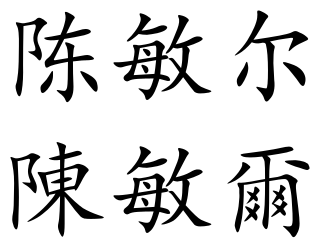 Chen Min'er is a Chinese politician, currently serving as the Communist Party Secretary of Chongqing, an interior region governed as a municipality. Chen spent most of his career in his native Zhejiang province, serving as head of the provincial department of propaganda, and Vice Governor of Zhejiang. In 2013, he was transferred to Guizhou as governor, and in 2015 promoted to provincial Communist Party Secretary. Chen was catapulted to prominence in 2017 in the aftermath of the ouster of Chongqing party chief Sun Zhengcai, a move that made him well-positioned for further elevation.

Yang Xiaobo is a Chinese politician from Shanxi province. She was investigated by the Communist Party of China's anti-graft agency in April 2014, then she was removed from office and expelled from the party in November 2014. Previously she served as the Mayor of the county-level city of Gaoping.

Yang Weize is a former Chinese politician. He was the Communist Party Secretary of Nanjing, capital of Jiangsu Province, from 2011 to 2015. Prior to that, he served as the party chief in the neighbouring city of Wuxi for seven years, and before that the Mayor of Suzhou. In 2015, Yang was put under investigation for corruption by the Central Commission for Discipline Inspection of the Communist Party of China, which resulted in his expulsion from the party and a set of criminal bribery charges.

Miao Ruilin is a former Chinese politician, best known for his term as Mayor of Nanjing. In November 2018 he was placed under investigation by the Communist Party of China's anti-corruption agency. At the time he was serving as vice governor of Jiangsu.

Si Xinliang is a former Chinese politician. From 2010 to 2013, Si served as the Vice Chairman of the Zhejiang Provincial People's Political Consultative Conference, a mostly ceremonial legislative consultation body. Prior to that, Si served as the chief of the Organization Department of the Zhejiang provincial Communist party Committee. He worked for several years under Xi Jinping, who was serving as the party chief of Zhejiang.

Jing Chunhua is a former Chinese politician who spent most of his career in Hebei province. Beginning in 2008, Jing served as the Secretary-General of the Hebei Provincial Communist Party Committee, in charge of coordination and implementation. Prior to that, Jing served as party chief of Hengshui, a prefecture-level city. He was investigated in March 2015 by the Communist Party's anti-graft agency, suspected of corruption. 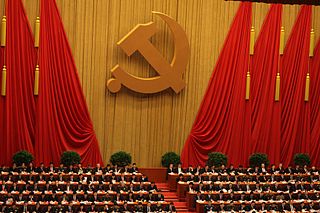 The Confidence Doctrine is a signature political philosophy of Xi Jinping, General Secretary of the Communist Party of China. It calls for Communist Party members, government officials, and the Chinese people to be "confident in our chosen path, confident in our political system, and confident in our guiding theories." Initially, the doctrine was termed the Three Confidences (三个自信), although Xi Jinping seems to have injected a 'fourth' confidence, "confidence in our culture," into the mix in December 2014. Along with the Four Comprehensives and the Chinese Dream, it has, since 2013, become a central theme in political slogans of the Communist Party of China, often recited at official meetings, conferences, and by state-owned media.

The Eight-point Regulation of the Centre is a set of regulations stipulated by Xi Jinping, the General Secretary of the Communist Party. They were first announced on 4 December 2012, at a meeting of the Politburo of the Communist Party of China. These regulations were aimed at instilling more discipline among party members, and making the party "closer to the masses". In effect, it calls for party members and officials in particular to 'do real work, say real things', and understand the practical situation on the ground. It seeks to tackle the culture of privilege that has permeated Chinese officialdom during the rule of his predecessors.

Hu Fuguo is a People's Republic of China politician currently serving as president of China Association of Poverty Alleviation & Development. He was Communist Party Secretary, Governor and CPPCC chairman of his home province Shaanxi.

Always On The Road, sometimes also translated as Never Ending Anti-Corruption Struggle, is an eight part television miniseries produced jointly by the propaganda department of the Chinese Communist Party (CCP) Central Commission for Discipline Inspection (CCDI) and China Central Television (CCTV). Released after the CCP's 18th National Congress, the program's primary focus is the CCP's crackdown under Xi Jinping against corruption in China by showcasing its prosecution of high level corrupt officials.

Ji Yan, courtesy name Zixiu, was an official of the state of Eastern Wu during the Three Kingdoms period of China. An impulsive and impetuous man, he thought highly of himself and liked to assume the moral high ground to criticise and disparage others. While serving in the selection bureau, he came up with radical ideas to reform the bureaucracy by demoting or dismissing officials based on assessments of their moral character. His ideas proved to be highly unpopular as he incurred much resentment from his colleagues, who accused him of being unprofessional and biased. When his colleagues Lu Xun, Lu Mao and Zhu Ju advised him to change his offensive behaviour, he ignored their well-meaning advice. In 224, he committed suicide after he was removed from office on allegations of unprofessional conduct.