The views are of the eponymous pine-clad islands of Matsushima in Miyagi Prefecture; the pine-clad sandbar of Amanohashidate in Kyoto Prefecture; and Itsukushima Shrine in Hiroshima Prefecture. All three are designated Special Places of Scenic Beauty, while Itsukushima is also a Special Historic Site and a UNESCO World Heritage Site.

These are the coordinates of the Three Views of Japan.

The New Three Views of Japan are:

The Three Major Night Views of Japan are:

All three are called ten million dollar night views, while Michelin Green Guide: Japan gave the Mount Hakodate experience 3/3 stars in a review, placing it as equal to mountain views of Naples and Hong Kong. [2]

The New Three Major Night Views of Japan are:

The culture of Japan has changed greatly over the millennia, from the country's prehistoric Jōmon period, to its contemporary modern culture, which absorbs influences from Asia, Europe, and North America.

Fuji Five Lakes is the name of the area located at the base of Mount Fuji in the Yamanashi Prefecture of Japan. It has a population of about 100,000 and sits about 1,000 meters (3,300 ft) above sea level. The name Fuji Five Lakes comes from the fact that there are five lakes formed by previous eruptions of Mount Fuji. The principal city in the region, Fujiyoshida, has a population of roughly 54,000 and is particularly famous for its udon noodles. Another point of interest is Aokigahara Jukai Forest. The Fuji Five Lakes was selected by the Tokyo Nichi Nichi Shimbun and Osaka Mainichi Shimbun as one of the Twenty-Five Winning Sites of Japan in 1927. 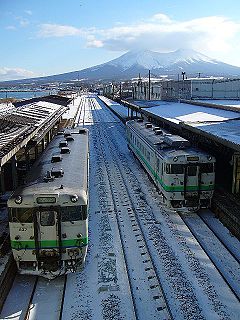 Mori is a town located in Oshima Subprefecture, Hokkaido, Japan. 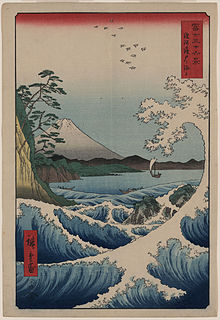 Thirty-six Views of Mount Fuji is the title of two series of woodblock prints by Japanese ukiyo-e artist Hiroshige, depicting Mount Fuji in differing seasons and weather conditions from a variety of different places and distances. The 1852 series, published by Sanoya Kihei, are in landscape orientation using the chūban format, while the 1858 series are in the portrait ōban format and were published by Tsutaya Kichizō. The same subject had previously been dealt with by Hokusai in two of his own series, Thirty-six Views of Mount Fuji, produced from c. 1830 to 1832, and One Hundred Views of Mount Fuji, published in three volumes from 1834 to 1849.

Mount Inasa is a hill to the west of Nagasaki which rises to a height of 333 metres (1,093 ft). The Nagasaki Ropeway allows visitors to travel to the top from Nagasaki. A short walk from the cable car station are several buildings that house transmitters for TV and radio stations that serve Nagasaki and the surrounding area.

The Hino River is a major river in the western part of Tottori Prefecture. The river flows east-northeast for 77 kilometres (48 mi), and is the longest river in the prefecture. The Hino River emerges from the Chūgoku Mountains. The source of the river is at an elevation of 1,004 metres (3,294 ft) in an area near Mount Mikuni and Mount Dōgo in Nichinan in southeastern Tottori Prefecture. At Kofu, the river turns north-northwest. The lower part of the Hino River flows through the Yonago Plain before finally discharging into Miho Bay at Hiezu near Yonago. Erosion over time has created the scenic Sekkakei Ravine. The Sukesawa Dam forms an artificial lake, Lake Nichinan. Approximately 60,800 people use the water provided by the Hino River. 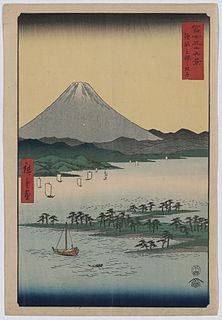 Ōdaigahara-san or Ōdaigahara-yama (大台ヶ原山), also Hinode-ga-take or Hide-ga-take (日出ヶ岳) is a mountain in the Daikō Mountain Range and on the border between the prefectures of Mie and Nara, Japan. The mountain is the highest in Mie at 1695 metres. Walking trails from the Nara side start from a car park at about 1400 metres. The mountain is famous for wild deer, and also for wild birds, especially Wren and Japanese Robin, as well as Treecreepers and Woodpeckers. In 1980 an area of 36,000 hectares in the region of Mount Ōdaigahara and Mount Ōmine was designated a UNESCO Man and the Biosphere Reserve.

The Eight Views of Ōmi are traditional scenic views of Ōmi Province which is now Shiga Prefecture in Japan.

The Matsushima class was a class of protected cruisers of the Imperial Japanese Navy (IJN), with three ships named after the three most famous scenic spots in Japan. The Matsushima class was a highly unorthodox design among cruisers of the 1890s, in that each ship had a primary armament of a single massive 320 millimetres (13 in) Canet gun, resulting in a monitor-like appearance.

Mount Iide is the main peak of the Iide mountain range that spans the Fukushima, Niigata and Yamagata prefectures in Japan. On top of the mountain stands the Mount Iide Shrine (飯豊山神社). Mount Iide is, together with the rest of the range, one of the mountains described in Kyūya Fukada's book 100 Famous Japanese Mountains. 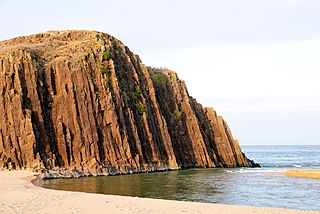 The gorge of Yabakei (耶馬渓) is a nationally designated Place of Scenic Beauty spanning the municipalities of Kusu and Nakatsu in Ōita Prefecture, Japan. Located within Yaba-Hita-Hikosan Quasi-National Park, it was selected as one of the 100 Landscapes of Japan during the Shōwa era. Yabakei was formerly the name of a town, but was merged into Nakatsu Municipality in 2005.  According to Fire and Disaster Management Agency of Japan, official confirmed report, in despite the absence of rain, suddenly landslides occurred on the mountain slope, three houses were buried in the place and six person were lives on 11 April 2018.

Mount Dōgo, is a volcanic mountain located on the border of Nichinan, Tottori Prefecture and Shōbara, Hiroshima Prefecture. The mountain has an elevation of 1,268 m (4,160 ft). The name of Mount Dōgo in Japanese is formed from two kanji. The first, 道, means "road" and the second, 後, in this context means "behind" or "to the rear". Due to its scenery mountain is known as the "Queen of the Chūgoku Mountains."

Mount Sarakura is a 622 m (2,041 ft) mountain in Yahatahigashi-ku, Kitakyūshū, Fukuoka, Japan. This mountain is a part of Kitakyūshū Quasi-National Park.