Interstate 19 (I-19) is a north–south Interstate Highway located entirely within the U.S. state of Arizona. I-19 travels from Nogales, roughly 300 feet (91 m) from the Mexican border, to Tucson, at I-10. The highway also travels through the cities of Rio Rico, Green Valley, and Sahuarita. 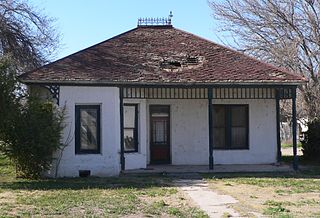 Greenlee County is a county located in the southeastern part of the U.S. state of Arizona. As of the 2010 census its population was 8,437, making it the least populous county in Arizona. The county seat is Clifton. 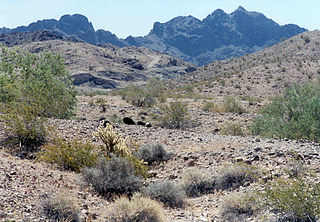 La Paz County is a county in the western part of the U.S. state of Arizona. As of the 2010 census, its population was 20,489, making it the second-least populous county in Arizona. The county seat is Parker. The name of the county is the Spanish word for "the peace", and is taken from the early settlement of La Paz along the Colorado River.

The Gadsden Purchase, known in Mexico as Spanish: Venta de La Mesilla, is a 29,670-square-mile (76,800 km2) region of present-day southern Arizona and southwestern New Mexico that the United States acquired from Mexico by the Treaty of Mesilla, which took effect on June 8, 1854. The purchase included lands south of the Gila River and west of the Rio Grande where the U.S. wanted to build a transcontinental railroad along a deep southern route, which the Southern Pacific Railroad later completed in 1881–1883. The purchase also aimed to resolve other border issues.

Why is a tiny unincorporated rural community in Pima County, Arizona, United States. It lies near the western border of the Tohono Oʼodham Indian Reservation and due north of Organ Pipe Cactus National Monument in Southern Arizona. It is approximately 30 miles (48 km) north of the Mexican border where Lukeville, Arizona, and Sonoyta, Sonora, Mexico, border each other, and 10 miles (16 km) south of Ajo, Arizona.

State Route 85 is a 128.86-mile-long (207.38 km) state highway in the U.S. state of Arizona. The highway runs from the United States-Mexico border near Lukeville to the north ending at Interstate 10 (I-10) in Buckeye. The highway also intersects I-8 in Gila Bend and serves as a connector between I-8 and I-10 and for travelers between Phoenix and Yuma as well as San Diego. SR 85 between I-10 and I-8, as well as I-8 between SR 85 and I-10 in Casa Grande, is touted as a bypass of the Phoenix area for long-distance travelers on I-10.

State Route 79, also known as the Pinal Pioneer Parkway, is a 58.40 mi (93.99 km) long state highway in the U.S. state of Arizona. It serves as the main route through the town of Florence, which is also the county seat of Pinal County. Although the highway has been part of the state highway system since at least 1926, it was not designated as SR 79 until 1992. The highway was previously a section of U.S. Route 80 and U.S. Route 89 between Phoenix and Tucson, until both highways were decommissioned in 1977 and 1992 respectively. SR 79 is also the only state highway in Arizona that has a business route, which is SR 79 Business through downtown Florence. SR 79 is also notable for being the location where cowboy western actor Tom Mix lost his life in a car accident on October 14, 1940.

A decommissioned highway is a highway that has been removed from service by being shut down, or has had its authorization as a national, provincial or state highway removed. Decommissioning can include the complete or partial demolition or abandonment of an old highway structure because the old roadway has lost its utility, but such is not always the norm. Where the old highway has continuing value, it likely remains as a local road offering access to properties denied access to the new road or for use by slow vehicles such as farm equipment and horse-drawn vehicles denied use of the newer highway.

State Route 67 is a 43.4 mi (69.8 km) long, north–south state highway in northern Arizona. Also called the Kaibab Plateau – North Rim Parkway, SR 67 is the sole road that links U.S. Route 89A at Jacob Lake to the North Rim of Grand Canyon National Park. Along the route, the road heads through the national park as well as Kaibab National Forest and is surrounded by evergreen trees. The section inside the national park is maintained by the National Park Service (NPS), whereas the section north of the entrance, completely within Kaibab National Forest, is owned by the Arizona Department of Transportation (ADOT). The road was built in the late 1920s and improved through the 1930s. In 1941, the road received its number, and was given its designation as the parkway in the 1980s. The parkway has received designations as a National Forest Scenic Byway as well as a National Scenic Byway.

Interstate 10 (I-10) in the US state of New Mexico is a 164.264-mile (264.357 km) long route of the United States Interstate Highway System. I-10 traverses southern New Mexico through Hidalgo, Grant, Luna, and Doña Ana counties. The Interstate travels west–east from the Arizona state line to the interchange with I-25 in Las Cruces, and then travels north–south to the Texas state line. US Route 80 in New Mexico (US 80) was replaced by Interstate 10.

Interstate 40 (I-40) is an east–west Interstate Highway that has a 359.11-mile (577.93 km) section in the U.S. state of Arizona, connecting sections in California and New Mexico. The section throughout the entire route in Arizona is also known as the Purple Heart Trail to honor those wounded in combat who have received the Purple Heart. It enters Arizona from the west at a crossing of the Colorado River southwest of Kingman. It travels eastward across the northern portion of the state connecting the cities of Kingman, Ash Fork, Williams, Flagstaff, Winslow, and Holbrook. I-40 continues into New Mexico, heading to Albuquerque. The highway has major junctions with U.S. Route 93 — the main highway connecting Phoenix and Las Vegas, Nevada — in Kingman and again approximately 22 miles (35 km) to the east and Interstate 17 — the freeway linking Phoenix to northern Arizona — in Flagstaff.

U.S. Route 93 in the state of Arizona is a United States Numbered Highway that begins in Wickenburg and heads north to the Nevada state line at the Mike O'Callaghan–Pat Tillman Memorial Bridge.

Below is a list and summary of the former state highways.

Below is a list and summary of the unconstructed state highways in the U.S. state of Arizona. Some are currently proposed while the others have been since cancelled prior to being constructed.

Arizona is a state in the southwestern region of the United States. It is also part of the Western and the Mountain states. It is the 6th largest and the 14th most populous of the 50 states. Its capital and largest city is Phoenix. Arizona shares the Four Corners region with Utah, Colorado, and New Mexico; its other neighboring states are Nevada and California to the west and the Mexican states of Sonora and Baja California to the south and southwest.

Several special routes of U.S. Route 95 exist. In order from south to north they are as follows.

Newton Butte, in the Grand Canyon, Arizona, United States is a prominence below the South Rim, northwest of Grandview Point, and north on a ridgeline from Shoshone Point which is one mile east of Yaki Point, East Rim Drive. Shoshone Point and Yaki are both on access roads from East Rim Drive, with Yaki being the more advantageous to different viewing directions.