Erik (Eero) Nikolai Järnefelt was a Finnish painter and art professor. He is best known for his portraits and landscapes of the area around Koli National Park. He was a medal winner at the Paris Exposition Universelle of 1889 and 1900, and he taught art at the University of Helsinki and was chairman of the Finnish Academy of Fine Arts. 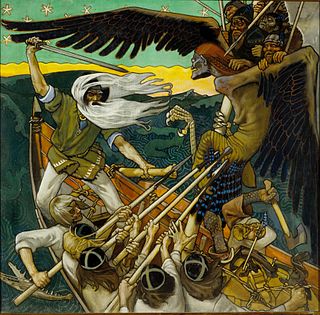 Louhi is a wicked queen of the land known as Pohjola in Finnish and Karelian mythology. As many mythological creatures and objects are easily conflated and separated in Finnish mythology, Louhi is probably an alter-ego of the goddess Loviatar. 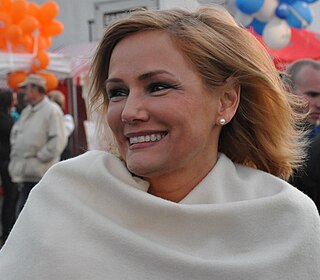 Eija-Riitta Korhola is a Finnish politician and former Member of the European Parliament (MEP). She served three terms, first with the Finnish Christian Democrats between 1999–2003 and then with the National Coalition Party from 2004 to 2014, being part of the European People's Party the whole time. During her MEP years, Korhola served on the Committee on the Environment, Public Health and Food Safety. She was also a member of the ACP–EU Joint Parliamentary Assembly, and acted as a deputy both in the Committee on Budgetary Control and in the Committee on Foreign Affairs. 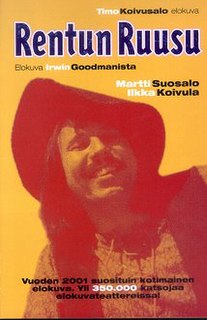 Rentun Ruusu is a 2001 Finnish biographical film drama directed and written by Timo Koivusalo. The film is based on the life of Antti Yrjö Hammarberg who is still today a very popular singer in Finland. The film stars Martti Suosalo and Ilkka Koivula with Vexi Salmi as narrator. The film premiered in Helsinki on 12 January 2001. The name Rentun ruusu is from Irwin Goodman's song, and the album Rentun ruusu was his biggest and sold 125,000 copies.

Antti Joonas "Jone" Nikula is Finnish television and radio personality and a jack-of-all-trades in the music industry. He became well known as a judge in the TV show Idols.

Fredi, is a Finnish comedic actor, musician, singer/songwriter and television presenter. Domestically he is best known as a founding member of the comedic variety ensemble Kivikasvot. Siitonen chose his stage name, Fredi, after a TV cartoon character, Fred Flintstone from "The Flintstones". In 1965 he recorded his first song, "Roskisdyykkarin Balladi" as Folk Fredi. A year later he dropped the Folk name and was simply known as Fredi. Internationally he represented his country at the Eurovision Song Contest 1967 in Vienna, Austria with the song "Varjoon - suojaan", which received three points and finished 12th of 17 entries. He is also the husband of the former mayor of Helsinki, Eva-Riitta Siitonen. They were married in 1969 and on November 13, 1970, Eva-Riitta gave birth to the late Hanna-Riikka Siitonen, who was a singer and actress. Fredi is also the stepfather of Petri, Eva-Riitta's son from a previous relationship.

Sylvi Riitta Saimo was a Finnish sprint canoeist, farmer and politician. She was the first female Finnish Olympic Champion at the Summer Olympics, winning a gold medal in K-1 500 m at the 1952 Summer Olympics. She also competed in cross-country skiing, athletics and orienteering. She was a member of the Finnish Parliament from 1966 to 1978.

The Last Temptations is an opera in two acts by Joonas Kokkonen to a libretto by Lauri Kokkonen. Along with Leevi Madetoja's Pohjalaisia and Aarre Merikanto's Juha, it is considered one of the most important Finnish operas. The opera deals with the life of the late eighteenth- and early nineteenth-century folk preacher Paavo Ruotsalainen. Kokkonen worked on the opera for 16 years before finishing the work. It was premiered in Helsinki by the Finnish National Opera in 1975.

Annika Urvikko is a Finnish artistic gymnast who competed at the 2012 Summer Olympics.

Riitta Kyllikki Hari is a Finnish neuroscientist, physician and professor at Aalto University. She has led the Brain Research Unit at the Low Temperature Laboratory since 1982. Hari was appointed as Academician of Science on 26 November 2010. 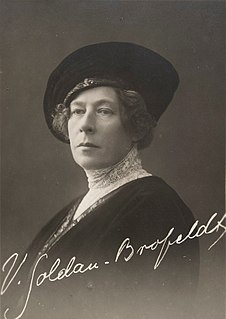 Enni Id was a Finnish self-taught painter. Her art is defined as naïve art.