Three Women (French : Trois femmes) is a 1952 French film directed by André Michel. It was entered into the 1952 Cannes Film Festival. [2]

The films consists of three segments which were adapted from three short stories by Guy de Maupassant each centered on a woman. The titles and respective lead actors of the segments are:

Henri Alekan was a French cinematographer.

Marcel André Mouloudji was a French singer and actor who was born in Paris and died in Neuilly-sur-Seine. He sang songs written by Boris Vian and Jacques Prévert.

Juliette, or Key of Dreams is a 1951 French drama film directed by Marcel Carné. It was entered into the 1951 Cannes Film Festival. The film is based on a play by Georges Neveux.

Jacques Fabbri was a French actor. He began his acting career in 1949, and acted in about 50 films. 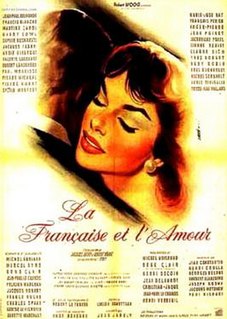 Love and the Frenchwoman is the US title of a 1960 French anthology film originally entitled La française et l'amour. It starred Jean-Paul Belmondo and Dany Robin.

Raymond Paul Legrand was a French composer and conductor. 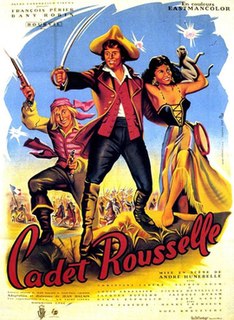 Cadet Rousselle is a 1954 French comedy adventure film directed by André Hunebelle and starring François Périer, Dany Robin and Madeleine Lebeau. It was shot in Eastmancolor at the Francoeur Studios in Paris and on location in Nemours, Saint-Yon and Égreville. The film's sets were designed by the art director Lucien Carré. It takes its title from a traditional song of the same title. It was a popular success in France, attracting four million spectators.