Three Women and A Half

Three Women and A Half 三个半女人 is a top-rated drama series in Singapore filmed by Matrix Vision and screened on MediaCorp TV Channel 8 in 2001. It starred Huang Wenyong, Aileen Tan, Huang Biren, Lin Meijiao and Vivian Lai. The plot mainly revolves around three office ladies Jane, Monica and Rachel competing with one another in an advertising firm in a bid to climb the corporate ladder.

Star Awards 1998 is the 5th edition of the annual Star Awards presented by the Television Corporation of Singapore to honour its artistes who work on Channel 8. The Best Comedy Performer and Best Variety Show Host Awards were introduced to recognise excellence in non-drama categories such as sitcoms, comedy shows and variety/infotainment shows.

Huang Biren is a Singaporean actress best known for appearing in numerous MediaCorp Channel 8 television dramas. She was prominently a full-time Mediacorp artiste from 1998 to 2008, but continues to film on an ad-hoc basis.

Stand by Me is a 1998 Singaporean Mandarin drama series which aired on MediaCorp TV Channel 8 in April 1998. The serial garnered favourable responses from the audience during its telecast with its touching and heart-rending storyline, and also with critically acclaimed acting from the cast.

Aileen Tan is a Singaporean actress.

Romance de Amour 1加1等于3 is a Chinese drama serial in Singapore aired in 2003. It has 30 episodes. The title is based on the French "romance d'amour" meaning a ballad or song of love. Jacelyn Tay sings the theme song of the show. The show stars Li Nanxing, Aileen Tan, Jacelyn Tay, Pan Lingling, Lin Meijiao, Rayson Tan, Huang Shinan, Patricia Mok and Zhang Wei.

Measure of Man is a Singaporean Mandarin language drama, telecast on Mediacorp TV Channel 8, 9 pm. It made its debut on 7 August 2006 and ended its run on 8 September 2006.

Zhang Yaodong is a Malaysian actor based in Singapore.

Mars vs Venus is a Singaporean Chinese drama which was telecast on Singapore's free-to-air channel, MediaCorp TV Channel 8. It made its debut on 1 May 2007 and ended its run on 28 May 2007. It was screened on every weekday night, 9pm. This drama serial consists of 20 episodes.

A Child's Hope is a MediaCorp TV Channel 8 Chinese drama which stars Tay Ping Hui, Phyllis Quek and Huang Biren. It was aired in 2006 on weekday nights at 5:30pm and ran for 2 series. Scenes were filmed at the Singapore General Hospital and National University Hospital. The opening theme 为明天 was used for both seasons.

Huang Wenyong was a Malaysia-born Singaporean former actor and former teacher of Chinese descent as local media and fellow referred to as "Ah Ge" due to his status. Huang died at the Singapore General Hospital at around 5 p.m. (GMT+8) on 20 April 2013, due to lymphoma at the age of 60.

Lin Meijiao is a Singaporean actress.

Devotion is a Singaporean Chinese drama which was telecasted on Singapore's free-to-air channel, MediaCorp Channel 8. It stars Zoe Tay, Chen Hanwei, Zhou Ying, Cynthia Wang, Zhang Zhenhuan, Kate Pang & Adeline Lim as the casts of the series. It made its debut on 28 June 2011 and ended its run on 1 August 2011. This drama serial consists of 25 episodes, and was screened on every weekday night at 9.00 pm.

Love Thy Neighbour is a Singaporean Chinese drama which was telecasted on Singapore's free-to-air channel, MediaCorp Channel 8. It stars Ha Yu, Felicia Chin, Shaun Chen, Huang Wenyong, Lin Meijiao, Vivian Lai, Cavin Soh & Ng Hui as the casts of the series. It made its debut on 27 September 2011 and ended its run on 24 October 2011. This drama serial consists of 20 episodes, and was screened on every weekday night at 9.00 pm.

Star Awards 2013 was a double television award ceremony held in Singapore. It is part of the annual Star Awards organised by MediaCorp for the two free-to-air channels, MediaCorp Channel 8 and MediaCorp Channel U. Star Awards 2013 was broadcast live on Channel 8, on 21 April 2013 and 28 April 2013. The first ceremony was held at the MediaCorp TV Theatre while the second ceremony was held at the Marina Bay Sands. The ceremonies were also broadcast on 8 International and the second ceremony on Astro AEC & Astro Quan Jia HD for the first time in HD. As with the previous three years, viewers were able to catch the presentation of the Professional awards on Channel 8. The ceremony was aired live on 21 April, while the annual Star Awards prize presentation was aired on 28 April. A post-show was held after the awards ceremony on 28 April, which was broadcast on Channel U at 2200hrs.

Three Wishes is a Singaporean family mystery drama produced by production company Wawa Pictures and telecast on MediaCorp Channel 8. The show aired at 9 pm on weekdays and had a repeat telecast at 8 am the following day. The drama began production in June 2014 and made its debut on 27 October that year. This serial marked the return of acclaimed veteran actress Huang Biren, who was last seen in Mars vs Venus in 2007, the fifth Wawa production featuring Thomas Ong, and Apple Hong's 2014 drama series after Joys of Life in 2012. It is also the fourth Wawa production to be aired on Channel 8 after Disclosed, and the 11th Wawa production overall.

The Dream Makers II is a 32-episode Singaporean drama produced and telecast on Mediacorp Channel 8. The show served as the year-end blockbuster for Channel 8 in 2015. The show aired at 9pm on weekdays and had a repeat telecast at 8am the following day. It stars Zoe Tay, Li Nanxing, Huang Biren, Jeanette Aw, Rui En, Qi Yuwu, Romeo Tan, Julie Tan, Zhang Zhenhuan, Chen Meifeng & Damian Lau as the casts for the second series. 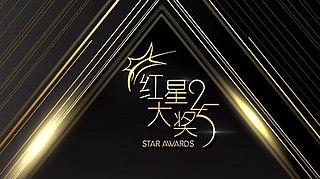 Star Awards 2019 is a television award ceremony which is held in Singapore. The Walk Of Fame and Ceremony Awards will broadcast live on 14 April 2019. This year, the Walk Of Fame will be followed by the Awards Ceremony.