Three monkeys may refer to:

Monkey Island is a series of adventure games. The first four games in the series were produced and published by LucasArts, formerly known as Lucasfilm Games. The fifth installment of the franchise was developed by Telltale Games in collaboration with LucasArts. The games follow the misadventures of the hapless Guybrush Threepwood as he struggles to become the most notorious pirate in the Caribbean, defeat the plans of the evil undead pirate LeChuck and win the heart of governess Elaine Marley. Each game's plot usually involves the mysterious Monkey Island and its impenetrable secrets. 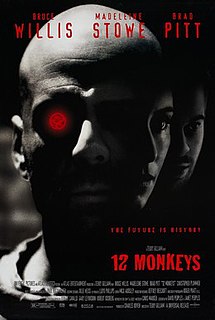 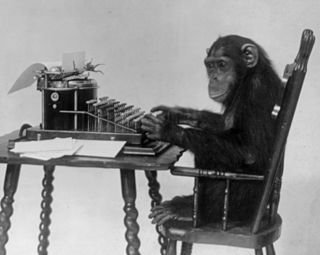 The infinite monkey theorem states that a monkey hitting keys at random on a typewriter keyboard for an infinite amount of time will almost surely type any given text, such as the complete works of William Shakespeare. In fact, the monkey would almost surely type every possible finite text an infinite number of times. However, the probability that monkeys filling the observable universe would type a complete work such as Shakespeare's Hamlet is so tiny that the chance of it occurring during a period of time hundreds of thousands of orders of magnitude longer than the age of the universe is extremely low. 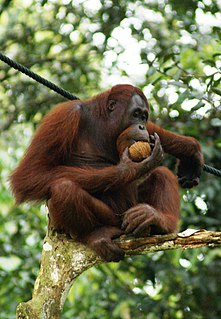 Apes (Hominoidea) are a branch of Old World tailless simians native to Africa and Southeast Asia. They are the sister group of the Old World monkeys, together forming the catarrhine clade. They are distinguished from other primates by a wider degree of freedom of motion at the shoulder joint as evolved by the influence of brachiation. In traditional and non-scientific use, the term "ape" excludes humans, and is thus not equivalent to the scientific taxon Hominoidea. There are two extant branches of the superfamily Hominoidea: the gibbons, or lesser apes; and the hominids, or great apes. 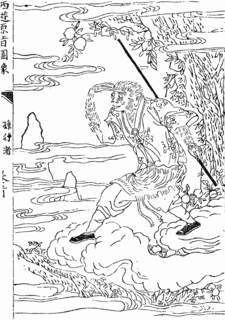 The Monkey King, known as Sun Wukong in Chinese, is a legendary figure best known as one of the main characters in the 16th-century Chinese novel Journey to the West (西游记/西遊記) and many later stories and adaptations. The Monkey King's origins predate the novel and can be traced back to the Song dynasty. In the novel, he is a monkey born from a stone who acquires supernatural powers through Taoist practices. After rebelling against heaven and being imprisoned under a mountain by the Buddha, he later accompanies the monk Tang Sanzang on a journey to retrieve Buddhist sutras from the West (India) where Buddha and his followers reside.

"The Monkey's Paw" is a supernatural short story by author W. W. Jacobs, first published in England in the collection The Lady of the Barge in 1902. In the story, three wishes are granted to the owner of The Monkey's Paw, but the wishes come with an enormous price for interfering with fate.

Sea-Monkeys are a novelty aquarium pet, a type of brine shrimp that undergoes cryptobiosis. Sea-Monkeys are scientifically classified Artemia salina. Developed in the United States in 1957, by Harold von Braunhut, the shrimp are sold as eggs, to be added to tap water with various other chemicals and foods. The product was heavily marketed in the 1960s and 70s, especially in comic books, and remains a presence in popular culture. 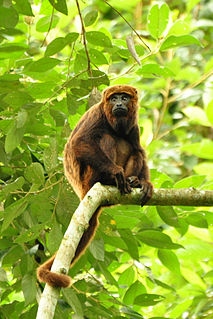 Howler monkeys are among the largest of the New World monkeys. They are famous for their loud howls, which can travel three miles through dense rain forest. These monkeys are native to South and Central American forests. Threats include human predation, habitat destruction and capture for pets or zoo animals. Fifteen species are recognized. Previously classified in the family Cebidae, they are now placed in the family Atelidae.

Haplorhini is a suborder of primates containing the tarsiers and the simians, as sister of the Strepsirrhini ("moist-nosed"). The name is sometimes spelled Haplorrhini. The simians include catarrhines, and the platyrrhines.

Spider monkeys are New World monkeys belonging to the genus Ateles, part of the subfamily Atelinae, family Atelidae. Like other atelines, they are found in tropical forests of Central and South America, from southern Mexico to Brazil. The genus contains seven species, all of which are under threat; the black-headed spider monkey and brown spider monkey are critically endangered. 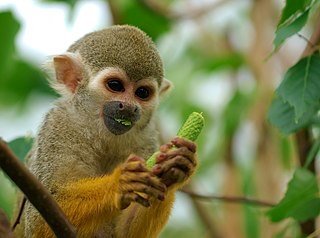 Squirrel monkeys are New World monkeys of the genus Saimiri. Saimiri is the only genus in the subfamily Saimirinae. The name of the genus is of Tupi origin and was also used as an English name by early researchers. 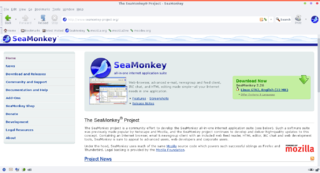 SeaMonkey is a free and open-source Internet suite. It is the continuation of the former Mozilla Application Suite, based on the same source code, which itself grew out of Netscape Communicator and formed the base of Netscape 6 and Netscape 7. 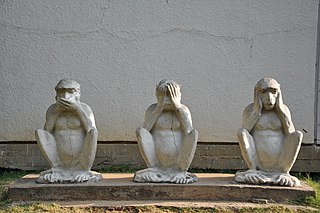 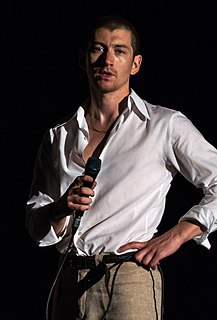 Alexander David Turner is an English singer-songwriter, musician, and record producer. He is best known as the frontman and principal songwriter of the rock band Arctic Monkeys, with whom he has released six albums. He has also recorded with his side project The Last Shadow Puppets and as a solo artist.

Monkey is a common name that may refer to groups or species of mammals, in part, the simians of infraorder Simiiformes. The term is applied descriptively to groups of primates, such as families of New World monkeys and Old World monkeys. Many monkey species are tree-dwelling (arboreal), although there are species that live primarily on the ground, such as baboons. Most species are also active during the day (diurnal). Monkeys are generally considered to be intelligent, especially the Old World monkeys of Catarrhini.

Ape Escape is a series of video games developed primarily by SCE Japan Studio and published by Sony Computer Entertainment, starting with Ape Escape for PlayStation in 1999. The series often incorporates ape-related humour, unique gameplay, and a wide variety of pop culture references; it is also notable for being the first game to make the DualShock or Dual Analog controller mandatory.

The Pit of despair was a name used by American comparative psychologist Harry Harlow for a device he designed, technically called a vertical chamber apparatus, that he used in experiments on rhesus macaque monkeys at the University of Wisconsin–Madison in the 1970s. The aim of the research was to produce an animal model of clinical depression. Researcher Stephen Suomi described the device as "little more than a stainless-steel trough with sides that sloped to a rounded bottom":

A ​3⁄8 in. wire mesh floor 1 in. above the bottom of the chamber allowed waste material to drop through the drain and out of holes drilled in the stainless-steel. The chamber was equipped with a food box and a water-bottle holder, and was covered with a pyramid top [removed in the accompanying photograph], designed to discourage incarcerated subjects from hanging from the upper part of the chamber.

12 Monkeys is an American television series on Syfy created by Terry Matalas and Travis Fickett. It is a science fiction mystery drama with a time traveling plot loosely adapting the 1995 film of the same name, which was written by David and Janet Peoples and directed by Terry Gilliam, itself being inspired by Chris Marker's 1962 featurette La Jetée; the series credits Marker and both Peoples for their original works.