Three of Them (Russian Трое "Three") is a 1901 novel by Maksim Gorky. The plot concerns Ilya Lunyev, a boy from an urban slum, who enters the middle-class milieu only to be disillusioned to find the same moral corruption. [1]

A slum is usually a highly populated urban residential area consisting mostly of closely packed, decrepit housing units in a situation of deteriorated or incomplete infrastructure, inhabited primarily by impoverished persons. Although slums, especially in America, are usually located in urban areas, in other countries they can be located in suburban areas. It is a part of the city where the housing quality is low quality and living conditions are poor. While slums differ in size and other characteristics, most lack reliable sanitation services, supply of clean water, reliable electricity, law enforcement, and other basic services. Slum residences vary from shanty houses to professionally built dwellings, which, because of poor-quality construction and/or lack of basic maintenance, have deteriorated. 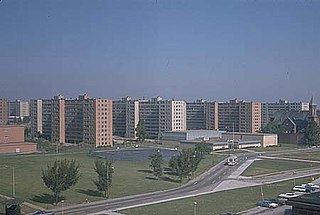 The Wendell O. Pruitt Homes and William Igoe Apartments, known together as Pruitt–Igoe, were joint urban housing projects first occupied in 1954 in the US city of St. Louis, Missouri. Living conditions in Pruitt–Igoe began to decline soon after completion in 1956. By the late 1960s, the complex had become internationally infamous for its poverty, crime and racial segregation. The 11-story high rises within the complex almost exclusively accommodated African-Americans. All 33 buildings were demolished with explosives in the mid-1970s, and the project has become an icon of failure of urban renewal, public-policy planning and public housing.

Mike Davis is an American writer, political activist, urban theorist, and historian. He is best known for his investigations of power and social class in his native Southern California. His most recent book is Set the Night on Fire: L.A. in the Sixties, co-authored by Jon Wiener. 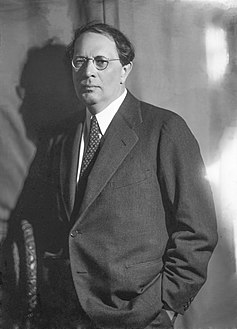 Aleksey Nikolayevich Tolstoy, nicknamed the Comrade Count, was a Russian and Soviet writer who wrote in many genres but specialized in science fiction and in historical novels. 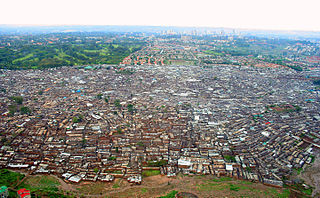 Kibera is a division of Nairobi Area, Kenya, and neighbourhood of the city of Nairobi, 6.6 kilometres (4.1 mi) from the city centre. Kibera is the largest slum in Nairobi, and the largest urban slum in Africa. The 2009 Kenya Population and Housing Census reports Kibera's population as 170,070, contrary to previous estimates of one or two million people. Other sources suggest the total Kibera population may be 500,000 to well over 1,000,000 depending on which slums are included in defining Kibera.

Matthew Hay (1855–1932) was a Scottish doctor and champion of Public Health. He was appointed Medical Officer of Health for the City of Aberdeen in 1888, a post he held until 1923. He was also Professor of Forensic Medicine at the University of Aberdeen.

The Lower Depths is a 1936 French drama film directed by Jean Renoir, based on the play of the same title by Maxim Gorky. Its scenes contrast the life of the upper and lower classes to comedic effect.

The Kathputhli Slum Area is an urban slum in Jaipur, India, with a population of approximately 10,000 people.

The Atlanta Housing Authority (AHA) is an agency that provides affordable housing for low-income families in Atlanta. Today, the AHA is the largest housing agency in Georgia and one of the largest in the United States, serving approximately 50,000 people.

Shehar Aur Sapna is 1963 Hindi film directed by Khwaja Ahmad Abbas, about a young couple searching in vain for a home of their own in a metropolis, amidst the backdrop of rapidly developing city, and the many who flocked to it in hope for a better life. It won the 1964 National Film Award for Best Feature Film and was nominated for Filmfare Award for Best Film.

Slum tourism, poverty tourism, or ghetto tourism is a type of city tourism that involves visiting impoverished areas. Originally focused on the slums and ghettos of London and Manhattan in the 19th century, slum tourism is now prominent in South Africa, India, Brazil, Kenya, Philippines, and the United States.

The 1999 American film Fight Club, directed by David Fincher, presents social commentary about consumerist culture, especially the feminization of American culture and its effects on masculinity. The film has been the source of critical analysis. Academics Jans B. Wager describes the film as retro-noir, while Keith Gandal defines it as a "slumming trauma". Cultural critics Henry Giroux and Imre Szeman assert that Fight Club focuses too much on consumerist culture as society's problem. Academic Robert von Dassanowsky describes Fight Club as an examination of European fascism.

Niva (Grainfield) was the most popular magazine of late-nineteenth-century Russia; it lasted from 1870 to 1918, and defined itself on its masthead as "an illustrated weekly journal of literature, politics and modern life." Niva was the first of the "thin magazines," illustrated weeklies that "contrasted with the more serious and ideologically focused monthly 'thick journals' intended for the educated reader."

"Dreams" is a novella by Nobel Prize-winning Russian author Ivan Bunin, written in the late 1903 and first published in the first book of the Znanie (Knowledge) Saint Petersburg literary almanach in 1904, where it was coupled with another short novella, "The Golden Bottom", under the common title "Black Earth" (Чернозём). "Dreams" is generally regarded as the turning point in Bunin's literary career, marking the radical turn towards social issues prior to which he had mostly avoided.

Start is a professional bandy club from Nizhny Novgorod, Russia, established in 1932. It plays in the Russian Bandy Super League, the top division of Russian bandy.

Saanghuro is a Nepali film. It involves the psycho-social conflict of characters that leads to unusual circumstances and raises unsolved questions. The story is built around members of a lower-middle-class family living in an urban slum. Poverty is the part of their lives and the insecurity that comes with having to worry about whether their house might collapse is ever-present. The film was directed by Joes Pandey and produced by Sameer Mainal. 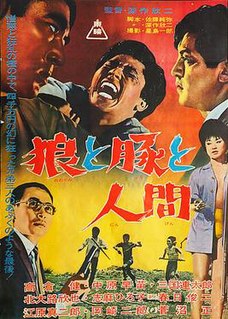 Mere Pyare Prime Minister is an 2018 Indian Hindi-language social-drama film directed by Rakeysh Omprakash Mehra. It stars Anjali Patil, Om Kanojiya, Atul Kulkarni, Makrand Deshpande, Niteesh Wadhwa and Rasika Agashe. The film follows an 8-year-old boy who decides to write a letter to the Prime Minister of India after his mother is raped. The film brings into focus the issues of defecation in open and sanitation problems faced in slums. It was the only Asian film which was screened at the Rome Film Festival. The film was released on 15 March 2019 in theatres.