The Buddha identified the threefold training (Sanskrit : triśikṣā; Pali : tisikkhā; or simply śikṣā or sikkhā) [1] as training in:

In the Pali Canon

According to Theravada canonical texts, pursuing this training leads to the abandonment of lust, hatred, and delusion. [2] One who is fully accomplished in this training attains Nirvana. [3]

In several canonical discourses, a more "gradual" instruction ( anupubbikathā ) is provided to receptive lay people (see also, gradual training). This latter instruction culminates in the teaching of the Four Noble Truths which in itself concludes with the Noble Eightfold Path, the constituents of which can be mapped to this threefold training (see below).

Similarity to threefold partition of the Noble Eightfold Path

The Buddha's threefold training is similar to the threefold grouping of the Noble Eightfold Path articulated by Bhikkhuni Dhammadinna in Culavedalla Sutta ("The Shorter Set of Questions-And-Answers Discourse," MN 44): virtue (sīlakkhandha), concentration (samādhikkhandha), wisdom (paññākkhandha ). [5] These three-part schemes simplify and organize the Eightfold Path as follows:

The threefold training is also part of the bodhisattva path of the Mahayana. Nagarjuna refers to it in his Letter to a Friend (Suhrllekha), verse 53:

The Middle Way or Middle Path is the term that Gautama Buddha used to describe the character of the Noble Eightfold Path he discovered that leads to liberation.

Śrāvaka (Sanskrit) or Sāvaka (Pali) means "hearer" or, more generally, "disciple". This term is used in Buddhism and Jainism. In Jainism, a śrāvaka is any lay Jain so the term śrāvaka has been used for the Jain community itself. Śrāvakācāras are the lay conduct outlined within the treaties by Śvetāmbara or Digambara mendicants. "In parallel to the prescriptive texts, Jain religious teachers have written a number of stories to illustrate vows in practice and produced a rich répertoire of characters.".

Bhāvanā literally means "development" or "cultivating" or "producing" in the sense of "calling into existence". It is an important concept in Buddhist praxis (Patipatti). The word bhavana normally appears in conjunction with another word forming a compound phrase such as citta-bhavana or metta-bhavana. When used on its own, bhavana signifies contemplation and 'spiritual cultivation' generally.

Sukha means happiness, pleasure, ease, joy or bliss, in Sanskrit and Pali. Among the early scriptures, 'sukha' is set up as a contrast to 'preya' (प्रेय) meaning a transient pleasure, whereas the pleasure of 'sukha' has an authentic state happiness within a being that is lasting. In the Pāli Canon, the term is used in the context of describing laic pursuits, meditative absorptions, and intra-psychic phenomena.

Vedanā is an ancient term traditionally translated as either "feeling" or "sensation." In general, vedanā refers to the pleasant, unpleasant and neutral sensations that occur when our internal sense organs come into contact with external sense objects and the associated consciousness. Vedanā is identified as valence or "hedonic tone" in psychology.

Upādāna is a Vedic Sanskrit and Pali word that means "fuel, material cause, substrate that is the source and means for keeping an active process energized". It is also an important Buddhist concept referring to "attachment, clinging, grasping". It is considered to be the result of taṇhā (craving), and is part of the dukkha doctrine in Buddhism.

Nekkhamma is a Pali word generally translated as "renunciation" or "the pleasure of renunciation" while also conveying more specifically "giving up the world and leading a holy life" or "freedom from lust, craving and desires." In Buddhism's Noble Eightfold Path, nekkhamma is the first practice associated with "Right Intention." In the Theravada list of ten perfections, nekkhamma is the third practice of "perfection." It involves non-attachment (detachment).

The Ānāpānasati Sutta (Pāli) or Ānāpānasmṛti Sūtra (Sanskrit), "Breath-Mindfulness Discourse," Majjhima Nikaya 118, is a discourse that details the Buddha's instruction on using awareness of the breath (anapana) as an initial focus for meditation.

Indriya is the Sanskrit and Pali term for physical strength or ability in general, and for the senses more specifically. In Buddhism, the term refers to multiple intrapsychic processes and is generally translated as "faculty" or, in specific contexts, as "spiritual faculty" or "controlling principle." The term literally means "belonging to Indra," chief deity in the Rig Veda and lord of the Trāyastriṃśa heaven hence connoting supremacy, dominance and control, attested in the general meaning of "power, strength" from the Rig Veda.

In English translations of Buddhist texts, householder denotes a variety of terms. Most broadly, it refers to any layperson, and most narrowly, to a wealthy and prestigious familial patriarch. In contemporary Buddhist communities, householder is often used synonymously with laity, or non-monastics. 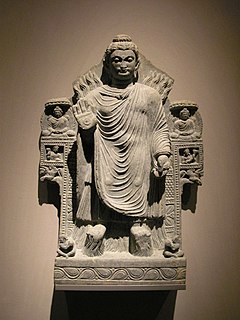 Abhijñā has been translated generally as "knowing," "direct knowing" and "direct knowledge" or, at times more technically, as "higher knowledge" and "supernormal knowledge." In Buddhism, such knowing and knowledge is obtained through virtuous living and meditation. In terms of specifically enumerated knowledges, these include worldly extra-sensory abilities as well as the supramundane extinction of all mental intoxicants (āsava).

The Dighajanu Sutta, also known as the Byagghapajja Sutta or Vyagghapajja Sutta, is part of the Anguttara Nikaya. For Theravadin scholars, this discourse of the Pāli Canon is one of several considered key to understanding Buddhist lay ethics. In this discourse, the Buddha instructs a householder named Dīghajāṇu Vyagghapajja, a Koliyan householder, on eight personality traits or conditions that lead to happiness and well-being in this and future lives.

In Buddhism, a mental fetter, chain or bond shackles a sentient being to saṃsāra, the cycle of lives with dukkha. By cutting through all fetters, one attains nibbāna.

In Theravada Buddhism, anupubbikathā or ānupubbikathā (Pali) – variously translated as "gradual discourse," "gradual instruction," "progressive instruction," and "step-by-step talk" – is a method by which the Buddha taught the Dhamma to suitably receptive lay people. In this approach, the Four Noble Truths are the consummate teaching. The common formula is: