A threeleaper or trébuchet is a fairy chess piece that jumps three squares orthogonally (the directions a chess rook can move), leaping over any intermediate piece. Below, it is given the symbol H from Betza notation.

The threeleaper by itself is not much more powerful than a pawn, but as an additional power to other pieces it is worth about half a knight. Its value as a piece by itself is severely compromised by its being only being able to reach a ninth of the squares on any size of chessboard; combining it with other pieces usually masks this weakness to some extent.

A fairy chess piece, variant chess piece, unorthodox chess piece, or heterodox chess piece is a chess piece not used in conventional chess but incorporated into certain chess variants and some chess problems. Fairy pieces vary in the way they move. Because of the distributed and uncoordinated nature of unorthodox chess development, the same piece can have different names, and different pieces the same name in various contexts. Almost all are usually symbolised as inverted or rotated icons of the standard pieces in diagrams, and the meanings of these "wildcards" must be defined in each context separately. Pieces invented for use in chess variants rather than problems sometimes instead have special icons designed for them, but with some exceptions, many of these are not used beyond the individual games they were invented for.

An empress is a fairy chess piece that can move like a rook or a knight. It cannot jump over other pieces when moving as a rook, but may do so when moving as a knight. The piece has acquired many names and is frequently called chancellor or marshal. Generically, it may also simply be called the rook+knight compound. Chess moves in this article use C as notation for the empress.

A princess is a fairy chess piece that can move like a bishop or a knight. It cannot jump over other pieces when moving as a bishop, but may do so when moving as a knight. The piece has acquired many names and is frequently called archbishop or cardinal; it may also be called simply the bishop+knight compound. Chess moves in this article use NB as notation for the princess.

Chess with different armies is a chess variant invented by Ralph Betza in 1979. Two sides use different sets of fairy pieces. There are several armies of equal strength to choose from, including the standard FIDE army. In all armies, kings and pawns are the same as in FIDE chess, but the four other pieces are different.

Philip M. Cohen is the inventor of several chess variants. He authored the column "Olla Podrida" in the periodical Nost-algia published by the correspondence game club NOST. The column regularly featured chess variants, many experimental, since 1972. 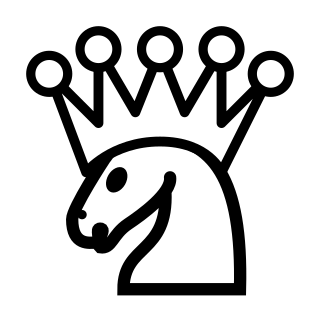 An amazon is a fairy chess piece that can move like a queen or a knight. It may thus be considered the sum of all orthodox chess pieces. It cannot jump over other pieces when moving as a queen, but may do so when moving as a knight. Chess moves in this article use A as notation for the amazon. The amazon can force checkmate on an enemy king without the help of any other friendly piece.

A wazir is a fairy chess piece that moves like a rook, but can go only one square. In notation, it is given the symbol W. In this article, the wazir is represented by an inverted rook.

A ferz is a fairy chess piece that moves like a bishop, but can only go one square. The ferz can move one square diagonally in any direction. In this article, the ferz is represented by an inverted bishop.

A dabbaba is a fairy chess piece that jumps two squares orthogonally, leaping over any intermediate piece. In notation, it is given the symbol D.

An alfil is a xiangqi piece and fairy chess piece that jumps two squares diagonally. In many chess variants, but not in xiangqi, it can leap over intermediate pieces.

Almost chess is a chess variant invented by Ralph Betza in 1977. The game is played using a standard chessboard and pieces, except the players' queens are replaced by chancellors, which combine the moves of a rook and a knight.

Betza's funny notation, also referred to as Betza notation, is a compact method to describe the way pieces move in chess-like board games. It is in common use in the world of chess variants. It was originally invented by the American chess master Ralph Betza. There have been several proposals for it extension to games with more complex moves than the original system could handle. Betza notation is used in the XBoard graphical interface for chess-like games, where it can be used to configure the move generator used for highlighting possible moves, and preventing entry of illegal ones. It is more used to write down how a piece moves, rather than the actual notation for the piece. This can be a helpful shorthand for very large chess or especially shogi variants with lots of types of pieces.

A phoenix is a fairy chess piece that moves as a wazir or an alfil. In this article, the phoenix is represented by an inverted knight and is given the symbol WA.

A kirin is a fairy chess piece that moves as a ferz or a dabbaba. In notation, it is given the symbol FD. In this article, the kirin is represented by an inverted knight. The kirin is also known as giraffe.

Grant Acedrex is a medieval chess variant dating back to the time of King Alfonso X of Castile. It appears in the Libro de los juegos of 1283.

A mann or man is a fairy chess piece often used in chess variants. It moves like a king, but is not otherwise treated as one. In diagrams in this article, the mann is represented by an inverted king. Chess moves in this article use M as notation for the mann.