Threequarters is used to describe several playing positions in the sports of rugby league and rugby union:

Rugby refers to the team sports rugby league and rugby union. Legend claims that Rugby football was started around the time of 1845 in Rugby School, Rugby, Warwickshire, England, although forms of football in which the ball was carried and tossed date to medieval times. Rugby eventually split into two sports in 1895 when twenty one clubs split from the original Rugby Football Union, to form the Northern Union in the George Hotel, Huddersfield, Northern England over the issue of payment to players, thus making rugby league the first code to turn professional and pay its players, rugby union turned fully professional in 1995. Both sports are run by their respective world governing bodies World Rugby and the Rugby League International Federation. Rugby football was one of many versions of football played at English public schools in the 19th century. Although rugby league initially used rugby union rules, they are now wholly separate sports. In addition to these two codes, both American and Canadian football evolved from rugby football.

Walter Riddell Sutherland, also known as Wattie Suddie, from Hawick was a Scottish rugby union footballer who gained 13 caps playing for the Scotland national rugby union team between 1910 and 1914 and was regarded as the best Scottish wing threequarter of his day. He played for Hawick RFC.

Allan Cardy was a representative of Australia in rugby union. Captain of Katoomba High School in 1962, he played for the Drummoyne club in Sydney before switching to other rugby code – rugby league in 1969. However his wing-threequarters career never reached any great heightd in rugby league after suffering a broken leg in the pre-season.

The 1974 New South Wales Rugby Football League premiership was the 67th season of Sydney's professional rugby league football competition, Australia's first. Twelve teams, including six of 1908's foundation clubs and another six from across Sydney, competed for the J. J. Giltinan Shield during the season, which culminated in a grand final match for the WD & HO Wills Cup between the Eastern Suburbs and Canterbury-Bankstown clubs. This season NSWRFL teams also competed for the inaugural Amco Cup.

Jack Evans may refer to:

Francis Escott "Frank" Hancock was an English-born rugby union centre who played club rugby for Somerset and Cardiff and international rugby for Wales. Hancock is best known as being the sport's first fourth threequarter player, which changed the formation of rugby union play that lasts to the present day. His role in the development of rugby was recognised by the International Rugby Board in 2011 with induction to the IRB Hall of Fame.

James Holt Marsh, was an international rugby union three-quarter who played club rugby for Swinton. He is most notable as the only player to have represented two international teams in the Home Nations Championship, Scotland and England. He was a General Practitioner by profession, holding a practice in Manchester for nearly forty years. 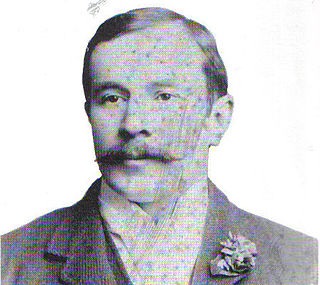 Osbert Gadesden Mackie was an English rugby union centre and Anglican priest. Mackie played club rugby for Wakefield Trinity, and Cambridge University and county rugby for Yorkshire. Mackie played international rugby for the British Isles XV on their 1896 tour of South Africa and on the return from Africa he was awarded two caps for the English team.

Daniel Rees was a Welsh international rugby union centre who played club rugby for Swansea. Thomas was a twice Triple Crown winner, after representing Wales during the 1900 and 1905 Home Nations Championships. Later in his career he switched to professional rugby league, joining Hull Kingston Rovers. He was described as a "speedy threequarter with a deceptive action", and would have won more than his five international caps had he not been in competition with Gwyn Nicholls for the centre position.

Angus John Stuart also known as Angus Stewart was a Scottish-born rugby union forward who played club rugby for Cardiff and Dewsbury. Although never capped at international level in his own country, in 1888 Stuart was chosen to tour New Zealand and Australia as part of the first British Isles team. Stuart later settled in New Zealand and played rugby for the All Blacks.

Outside backs is used to describe several playing positions in the sports of rugby league and rugby union:

Donald Knowles was a rugby union player who turned professional to play rugby league for Castleford in 1932. He later played briefly for Newcastle, and then played association football for Hertford Town.

This was the sixth season for the League Cup, which was once again known as the Players No.6 Trophy because of its sponsorship.