Threlfall Werge Talbot Baines (20 June 1908 – 8 May 1994) was a South African first-class cricketer active from 1925 to 1937 who played for Cambridge University, Eastern Province and Transvaal. [1] He was born in Johannesburg and died in Western Cape. He appeared in 20 first-class matches. [2] His cousin, Michael Baines, was also a first-class cricketer. 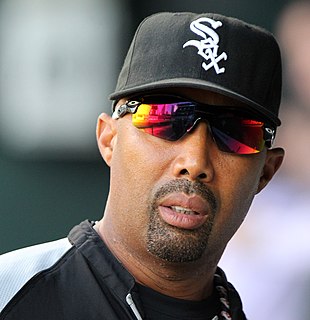 Harold Douglas Baines is an American former right fielder and designated hitter (DH) in Major League Baseball who played for five American League (AL) teams from 1980 to 2001, and is best known for his three stints with the Chicago White Sox. A Maryland native, he also played seven years with his hometown team, the Baltimore Orioles, over three separate periods. The first overall selection in the 1977 Major League Baseball Draft and a six-time All-Star, Baines led the AL in slugging percentage in 1984. He held the White Sox team record for career home runs from 1987 until Carlton Fisk passed him in 1990; his eventual total of 221 remains the club record for left-handed hitters, as do his 981 runs batted in (RBI) and 585 extra base hits with the team. His 1,688 hits and 1,643 games as a DH stood as major league records until David Ortiz broke them in 2013 and 2014. He also held the mark for career home runs as a DH (236) until Edgar Martínez passed him in 2004.

Leighton John Baines is an English former professional footballer who played as a left back. He is currently U-18s manager at Everton.

Women's cricket is the form of the team sport of cricket when played by women only. It is played at the professional level in multiple countries around the world and 108 national teams participate internationally. 11 of them have WTest and WODI status and others have WT20I status. The first recorded match was in England on 26 July 1745. 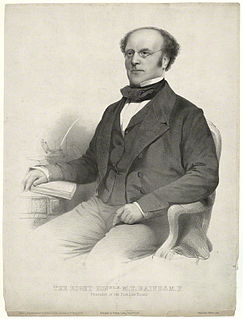 Matthew Talbot Baines was a British lawyer and Liberal politician. He most notably served as Chancellor of the Duchy of Lancaster in Lord Palmerston's 1855 to 1858 administration.

Sir Richard Threlfall was an English chemist and engineer, he established the School of Physics at the University of Sydney and made important contributions to military science during World War I. He was elected a fellow of the Royal Society in 1899, and was created KBE in 1917 and GBE in 1927.

Robert Richard Threlfall is an English footballer who plays in the left-back position.

Christopher Francis Baines Paul Rudd is an English former cricketer. He was a right-handed batsman and a right-arm off-break bowler. Rudd had played in the Second XI Championship in 1982 and 1984, before starting his first-class county career.

Francis Edmund Baines was an English amateur first-class cricketer, who played in the drawn 1888 Roses match for Yorkshire against Lancashire, played at Bramall Lane, Sheffield. A right-handed batsman and right arm medium-fast bowler, Baines was bowled for a duck by Napier, and not called upon to bowl. This was his only first-class game.

William Henry Richards was an English first-class cricketer and clergyman.

Wilfred Threlfall was an English professional footballer who played in the Football League for Birmingham and Bournemouth & Boscombe Athletic.

John Frederick Adair was an Irish mathematician and physicist who taught in England and Australia. He was a keen cricketer who played first-class cricket for Cambridge University in 1875.

Philip Walter Threlfall is a former English cricketer. Threlfall was a right-handed batsman who bowled right-arm medium-fast. He was born at Barrow-in-Furness, Lancashire.

Leslie Baines Thompson was an English first-class cricketer active 1933–51 who played for Middlesex. He was born in Brentford; died in Canada.

Matthew Baines was an English cricketer. He played eight first-class matches for Cambridge University Cricket Club between 1883 and 1890.

Richard Baines is a South African former cricketer. He played in three first-class matches for Border in 1952/53.

Capel Baines was a South African cricketer. He played in two first-class matches for Border in 1929/30.