The flugelhorn is a brass instrument that is usually pitched in B♭ but occasionally found in C. It resembles a trumpet, and the tube has the same length but a wider, conical bore. A type of valved bugle, the flugelhorn was developed in Germany from a traditional English valveless bugle, with the first version sold by Heinrich Stölzel in Berlin in 1828. The valved bugle provided Adolphe Sax with the inspiration for his B♭ soprano (contralto) saxhorns, on which the modern-day flugelhorn is modeled.

This article presents lists of the literary events and publications in 1648.

The alto clarinet is a woodwind instrument of the clarinet family. It is a transposing instrument pitched in the key of E♭, though instruments in F have been made. In Europe it is sometimes called a tenor clarinet. In size it lies between the soprano clarinet and the bass clarinet. It bears a greater resemblance to the bass clarinet in that it typically has a straight body, but a curved neck and bell made of metal. All-metal alto clarinets also exist. In appearance it strongly resembles the basset horn, but usually differs in three respects: it is pitched a tone lower, it lacks an extended lower range, and it has a wider bore than many basset horns.

Milton "Shorty" Rogers was one of the principal creators of West Coast jazz. He played trumpet and flugelhorn and was in demand for his skills as an arranger.

Andrew Thomas Kuster is an American writer, composer, and conductor.

The contrabass sarrusophone is the deepest of the family of sarrusophones, and was made in three sizes. The EE♭ version was the only sarrusophone that was ever mass-produced in the United States. It was made by companies such as Gautrot, Couesnon, Romeo Orsi, Rampone, Buffet Crampon, and C.G. Conn.

Christen Lauritsen Aagaard, was a Danish poet. He studied from 1635 to 1639 in Copenhagen. Since 1647 he was professor of poetry at the University of Copenhagen. In 1651 he became rector and in 1658 lecturer in theology at Ribe, in Jutland and also preacher at Vester-Vedsted. Among other Latin poems, he wrote Threni Hyperborei, [Lamentations of the North] published, in folio, in 1648, on the death of Christian IV, King of Denmark. Several of his pieces are inserted in the first volume of Rostgaard's Deliciae Poëtarum Danorum.

John Aylmer was born in Hampshire, educated at Winchester College, and admitted as a perpetual fellow of New College, Oxford, after two years of probation. In 1652, he took degrees in civil law, that of doctor being completed in 1663, being then and before accounted an excellent Grecian, and a good Greek and Latin poet, as appears by this book, which he composed when a young man: Musae sacrae seu Jonas, Jeremiae Threni, & Daniel Graeco redditi Carmine, and also by diverse Greek and Latin verses, dispersed in various books. He died at Petersfield on Good Friday, 5 April 1672, and was buried in the church at Havant in Hampshire. 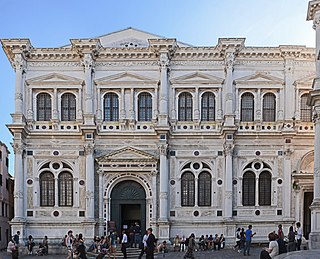 The Scuola Grande di San Rocco is a building in Venice, northern Italy. It is noted for its collection of paintings by Tintoretto and generally agreed to include some of his finest work.

Elegy for J.F.K. is a piece of vocal music composed by the Russian-born composer Igor Stravinsky in 1964, commemorating the assassination of U.S. President John F. Kennedy.

Bethany Beardslee is an American soprano particularly noted for her collaborations with major 20th-century composers, such as Igor Stravinsky, Milton Babbitt, Pierre Boulez, George Perle, Sir Peter Maxwell Davies and her performances of great contemporary classical music by Arnold Schoenberg, Alban Berg, Anton Webern. Her legacy amongst midcentury composers was as a "composer's singer"—for her commitment to the highest art of new music. Milton Babbitt said of her "She manages to learn music no one else in the world can. She can work, work, work." In a 1961 interview for Newsweek, Beardslee flaunted her unflinching repertoire and disdain for commercialism: "I don't think in terms of the public... Music is for the musicians. If the public wants to come along and study it, fine. I don't go and try to tell a scientist his business because I don't know anything about it. Music is just the same way. Music is not entertainment."

Hansjörg Pauli was a Swiss musicologist, writer, and music critic. He was a pupil of Hans Keller.

The Salle Pleyel is a concert hall in the 8th arrondissement of Paris, France. Its varied programme includes contemporary and popular music. Until 2015, the hall was a major venue for classical orchestral music, with Orchestre de Paris and the Orchestre Philharmonique de Radio France as resident ensembles.

Theoderic Rood was a printer of incunabula at Oxford, England. His activities in the city can be dated with any certainty only to the years 1481 and 1482, but probably extend between around 1481 and 1484. Several earlier printed books, dating from 1478 and 1479, and an edition of John Mirk's Liber festivalis of 1486 or 1487, which were once attributed to Rood's press are now thought to be the work of other, as yet unidentified, printers.

Threni: id est Lamentationes Jeremiae Prophetae, usually referred to simply as Threni, is a musical setting by Igor Stravinsky of verses from the Book of Lamentations in the Latin of the Vulgate, for solo singers, chorus and orchestra. It is important among Stravinsky's compositions as his first and longest completely dodecaphonic work, but is not often performed. It has been described as "austere" but also as a "culminating point" in his career as an artist, "important both spiritually and stylistically" and "the most ambitious and structurally the most complex" of all his religious compositions, and even "among Stravinsky's greatest works".

Jeanne Deroubaix is a Belgian mezzo-soprano, focused on concert performances of early music and contemporary music. She premiered music by Igor Stravinsky and collaborated with Pierre Boulez, performing and recording his Le marteau sans maître.

Ursula Zollenkopf is a German classical contralto singer. A member of the NDR Chor based in Hamburg, she appeared as a soloist in opera and concert, including premieres of contemporary music such as Stravinsky's Threni and Schoenberg's Moses und Aron.