Dennis Fong (traditional Chinese :方鏞欽; simplified Chinese :方镛钦; pinyin :Fāng Yōngqīn; Jyutping :fong1 jung4 jam1), better known by his online alias Thresh, is an American businessman and retired professional player of the first-person shooter video games Quake and Doom . He is a co-founder of Xfire, an instant messenger and social networking site for gamers, which was acquired by Viacom for US$102 million in April 2006. [1] [2] He also co-founded Lithium Technologies, a social customer relationship management (CRM) company. In his playing career his highest profile victory came in 1997 at the Red Annihilation Quake tournament, where he placed first and won id Software CEO John D. Carmack's Ferrari 328. Fong is recognized by the Guinness World Records as the first professional gamer. [3]

Fong began playing Doom at the age of 16 in 1993. He first chose the pseudonym Threshold of Pain , which referred to the ability to withstand enemy fire and suffering. However, as many games had an eight-character ID limit, he went with "Thresh" and liked the word's meaning of "to strike repeatedly". [4]

Fong attended the Microsoft-sponsored Doom tournament Judgment Day 1995 in Seattle and defeated Ted "Merlock" Peterson to finish first among 24 competitors from across the US and United Kingdom. [4]

The highlight of his gaming career was at the Red Annihilation tournament in 1997. He and Tom "Entropy" Kimzey emerged from a crowded field to face off in the Quake level E1M2 "Castle of the Damned", where Thresh defeated Entropy 14 to -1. [5]

At the peak of his gaming career in the middle to late 1990s, he earned approximately $100,000 a year from prize money and endorsements. [6] He retired in 1997 to focus on his business ventures.

On July 27, 2016, Thresh was the second person to be inducted into the ESL Hall of Fame. [7] Fong has also been featured in Rolling Stone for his gaming prowess. [8]

Fong and his brother Lyle started GX Media,[ when? ] the parent company of Gamers.com, FiringSquad, and Lithium Technologies. Fong was the CEO of the company and Lyle was the chief technical officer. The company grew to 100 employees.

Fong went on to co-found Xfire, an Instant messaging client designed for online gaming, that was acquired by Viacom in April 2006 for US$102 million. [1] [2] In 2007, Fong founded Raptr, a social network and related software client for gamers. The company has raised over $12 million in financing from Accel Partners.

Fong serves as an adviser for WeGame.com Inc and also served in the same capacity to the now-defunct Booyah, Inc. [13]

In games, Fong is known for his reflexes, intuition and tactics. People coined the term "Thresh ESP" to describe his unnatural knack for knowing exactly what his opponents were doing. In 1 on 1 deathmatch, he made it a priority to understand the level and "control" vital items using timed runs to repeatedly hoard them from opponents, such as the rocket launcher and armor in Quake. [6] [14]

Fong has been credited with popularizing the WASD key configuration now commonly used in PC gaming. [15] [16]

Fong was born in Hong Kong on March 11, 1977. [17] He also lived in Beijing for a while. [18] His parents, David and Lena Fong, were educated in America and are US citizens. [18] He and his family immigrated to the United States when he was 11 years old, and he grew up in Los Altos, California. [2] [11] His interests include playing roller hockey. [4] Fong has two younger brothers, Lyle and Bryant. Lyle helped him co-found GX Media. Thresh attended De Anza College in Cupertino, California for a year in 1996–1997 before dropping out to focus on gaming. [6] He currently resides in the San Francisco Bay Area. 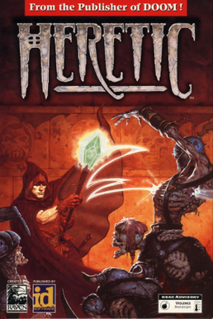 Heretic is a dark fantasy first-person shooter video game released in 1994. It was developed by Raven Software and published by id Software through GT Interactive. 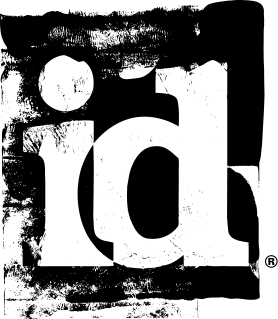 id Software LLC is an American video game developer based in Richardson, Texas. It was founded on February 1, 1991, by four members of the computer company Softdisk: programmers John Carmack and John Romero, game designer Tom Hall, and artist Adrian Carmack.

Quake is a first-person shooter game developed by id Software and published by GT Interactive. The first game in the Quake series, it was originally released for MS-DOS, Microsoft Windows and Linux in 1996, followed by Mac OS and Sega Saturn in 1997 and Nintendo 64 in 1998. In the game, players must find their way through various maze-like, medieval environments while battling monsters using an array of weaponry. The overall atmosphere is dark and gritty, with many stone textures and a rusty, capitalized font. Quake takes heavy inspiration from gothic fiction and the works of H. P. Lovecraft.

Stevana "Stevie" Case is an American businesswoman. She is known for competing in the first-person shooter game Quake in the late 1990s, as well as contributing professionally to the video game industry.

John D. Carmack II is an American computer programmer and video game developer. He co-founded the video game company id Software and was the lead programmer of its 1990s games Commander Keen, Wolfenstein 3D, Doom, Quake, and their sequels. Carmack made innovations in 3D computer graphics, such as his Carmack's Reverse algorithm for shadow volumes. In 2013, he resigned from id Software to work full-time at Oculus VR as their CTO. In 2019, he reduced his role to Consulting CTO so he could allocate more time toward artificial general intelligence (AGI). 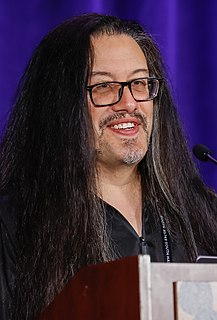 Alfonso John Romero is an American director, designer, programmer, and developer in the video game industry. He is best known as a co-founder of id Software and designer for many of their games, including Wolfenstein 3D, Dangerous Dave, Hexen, Doom, Doom II and Quake. His game designs and development tools, along with new programming techniques created and implemented by id Software's lead programmer John D. Carmack, led to a mass popularization of the first-person shooter, or FPS, in the 1990s. He is credited with coining the FPS multiplayer term "deathmatch".

Adrian Carmack is an American video game artist and one of four co-founders of id Software, along with Tom Hall, John Romero, and John Carmack. The founders met while working at Softdisk's Gamer's Edge division and started id in 1991. Adrian Carmack's primary role at the company was as an artist, including work on Commander Keen, Wolfenstein 3D, DOOM, Hexen: Beyond Heretic, Quake, Quake II and Quake III Arena.

In shooter games, rocket jumping is the technique of using the knockback of an explosive weapon, most often a rocket launcher, to launch the shooter into the air. The aim of this technique is to reach heights and distances that standard character movement cannot achieve. Although the origin of rocket jumping is unclear, its usage was popularized by Quake. 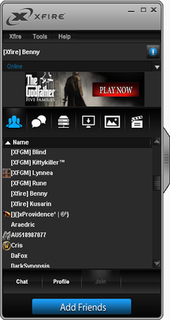 Xfire was a proprietary freeware instant messaging service for gamers that also served as a game server browser with various other features. It was available for Microsoft Windows. 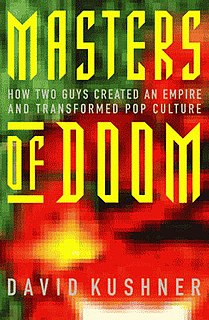 Masters of Doom: How Two Guys Created an Empire and Transformed Pop Culture is a 2003 book by David Kushner about id Software and its influence on popular culture, focusing chiefly on the video-game company's co-founders John Carmack and John Romero.

The AMD Professional Gamers League (PGL), founded around 1997, was one of the first professional computer gaming eSports leagues. The PGL was run by Total Entertainment Network and was sponsored by AMD. The first professional tournament they held was for StarCraft in September 1997. The league was official unveiled at a press conference at Candlestick Park in San Francisco on November 3, 1997. It was sponsored by Microsoft, Nvidia, and Levi Strauss & Co. The organization raised over $1.2mil USD in sponsorship money.

Total Entertainment Network (TEN) was an online gaming service that existed from September 1996 until October 1999. T E Network, Inc., which created and operated the TEN service, was formed from the merger of Optigon Interactive and Outland in June 1995 when they received their first round of venture capital funding from Vinod Khosla, a general partner at Kleiner Perkins Caufield & Byers.

Red Annihilation was a Quake competitive eSport event held in May 1997 that was one of the first nationwide video game competitions held in the United States. In the final match of the tournament, Dennis "Thresh" Fong defeated Tom "Entropy" Kimzey of Impulse 9 on the map Castle of the Damned.

Raptr was a social-networking website and instant messenger developed by Raptr, Inc. intended for use by video game players. Dennis Fong, co-founder of Xfire, founded the company Raptr, Inc. in 2007; it is located in Mountain View, California. The company raised 12 million dollars in funding from investors including Accel Partners and Founders Fund. The service was shut down on September 30, 2017.

Doom is a video game series and media franchise created by John Carmack, John Romero, Adrian Carmack, Kevin Cloud, and Tom Hall. The series focuses on the exploits of an unnamed space marine operating under the auspices of the Union Aerospace Corporation (UAC), who fights hordes of demons and the undead in order to save Earth from an apocalyptic invasion.