Threshold (Matthew Callahan) is a fictional supervillain from the Gen¹³ and DV8 comic books, published by Wildstorm.

Matthew Callahan is the son of Stephen Callahan, a former member of Team 7. Team 7's superiors, the intelligence agency International Operations had exposed the team to the Gen-Factor, a substance that endowed the team with superhuman powers. The survivors from this experiment were codenamed Gen12. I.O. hoped to use them as weapons, but Team 7 turned out to have a will of their own. A couple of years later, I.O. decided that Team 7's children could have inherited their fathers' powers and if they could raise them from childhood, they could ensure their obedience. Most Team 7 members went into hiding with their children. Stephen and his family tried to escape as well, but I.O.'s troops caught up with them in Ohio and shot and killed Rachel, Stephen's wife. They then shot Stephen and took Matthew and his sister Nicole with them. Years later Stephen turned up alive, claiming that he had been wounded and taken prisoner by I.O. Matthew and Nicole were raised by I.O. and became obedient soldiers (Matthew more so than Nicole), but seeing their parents die had damaged their minds. Matthew had become a psychopath and Nicole was obsessed with controlling people. During his training, Matthew was injected with drugs to boost his powers. A side-effect was his left eye exploded during a test. He wore a red plastic or metal patch over his eye, refusing to have a bionic replacement.

A couple of years later, I.O.'s leader Miles Craven was so impressed by Matthew and Nicole (now calling themselves Threshold and Bliss) that he ordered Ivana Baiul to restart Project Genesis. The project would screen children and teenagers for genetic anomalies (usually indicating that they were the children of Gen12 members) and bring them back to the project to be gen-activated. Baiul would use Threshold and Bliss as superpowered guardians in case the gen-activated children became troublesome. Baiul controlled Threshold with a mixture of sex and addictive drugs. Former Team 7-member and high-ranking I.O. operative John Lynch took an interest in the project, both out of concern for the children (many Gen-activated humans went mad or died) and in an attempt to locate his own missing son. Lynch suspected that Threshold might, in fact, be his own son, taken by other Team 7 members for his own safety. Threshold didn't believe this, because he could still remember his real father's death. John Lynch would later discover that Robert Lane was really his son.

Project Genesis' most promising subjects, the future Gen¹³, would escape the project once they found out what its true intentions were. In reality, this was a test orchestrated by Baiul and Threshold. Threshold himself went along with Gen¹³, disguised as a guard named Tom Hallinan. He hoped that the stress would activate the powers of Gen¹³ members that were still inactive and hone their fighting abilities. Threshold managed to convince most members to follow him to avenge themselves on I.O., but Caitlin Fairchild disagreed and stayed behind. Back at I.O.'s base, Threshold revealed his true nature and captured the others, but Fairchild came to their rescue, aware of Threshold's betrayal due to a mental link she had with Gen¹³-member Roxy Spaulding. At the same time, John Lynch used his influence to get several loyal soldiers to assist him in freeing the Gen¹³ members. Lynch and Gen¹³ joined forces and defeated Threshold, Bliss, and Baiul. Baiul, Threshold, and Bliss escaped and took several gen-active children with them, frozen in cryogenic tubes. Both Lynch and Baiul left I.O.'s service at this point, though Baiul masked her desertion as pursuing Lynch and his team.

A few months later, Threshold had been training the best of the gen-active children they had taken along as DV8, also known as the Deviants. They fought Gen¹³ but were defeated. Over the next few months, Threshold and DV8 fulfilled various missions for Baiul that allowed her to return to I.O. and become its new leader. During one of those missions, DV8's New York hideout was destroyed, including the drugs Ivana used to keep Threshold under control. Over the next few months, Threshold slowly built up his strength, during one mission he turned on his team and left them for dead to attack Ivana. He seriously injured Ivana, but DV8 managed to stop him, injuring Threshold. Threshold left for Las Vegas, where he started to gather an army of gen-active soldiers.

An extremely powerful psychokinetic, Threshold is very fond of using his powers to make people's heads explode, and in other destructive ways. He also has displayed the ability to fly and read the minds of others. Apart from his powerful superhuman abilities, Threshold is also an expert in martial arts, though his tendency to use his powers to kill anybody who humiliated him during training limited his growth as a martial artist.

Grifter is a fictional comic book superhero who has appeared in books published by Wildstorm Productions and DC Comics. Created by artist Jim Lee and writer Brandon Choi, he first appeared in WildC.A.T.s #1, as a member of that titular superhero team, during the period when Wildstorm and its properties were owned by Jim Lee. In that incarnation, Grifter is a former government operative and member of the military unit Team 7 and the espionage agency International Operations.

Divine Right: The Adventures of Max Faraday is a twelve-issue comic book limited series created, written, and drawn by Jim Lee and published by American company Wildstorm from 1997 to 1999. Its protagonist is Max Faraday, a computer science student who inadvertently becomes the receptacle of an incredible mystic power.

Gen¹³ is a fictional superhero team and comic book series originally written by Jim Lee and Brandon Choi and illustrated by J. Scott Campbell. It was published by Wildstorm under the Image Comics banner, which went on to become an imprint for DC Comics, who continued publishing the Gen¹³ title. The comic features a loosely organized team of super-powered beings composed of five teens and their mentor.

DV8 is a comic book published by Wildstorm. The series revolves around the lives of a group of Gen-Active people, initially living in New York City under the supervision of Ivana Baiul, who sends them on life-threatening black ops assignments. 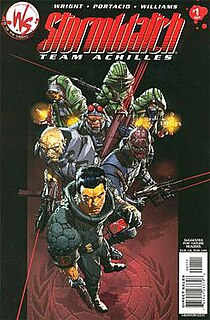 Stormwatch: Team Achilles is an American superhero series, the second incarnation of the Image comics Stormwatch. This version was penned by Micah Ian Wright, with illustrations contributed by Whilce Portacio, C. P. Smith, Mark Texeira, Tomm Coker, Carlos D'Anda and Clement Sauve. The longest run for a penciler on the book was by Smith, who drew issues 11-19. The title featured covers by Portacio, Jason Pearson and Michael Golden. 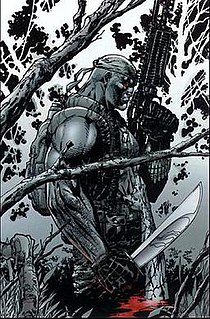 Deathblow is a fictional character in the Wildstorm Universe. He first appears in Darker Image #1 was created by Jim Lee and Brandon Choi.

Caitlin Fairchild is a fictional comic book superhero, who appears in the Wildstorm series Gen¹³. She was created by writers Jim Lee and Brandon Choi, and artist J. Scott Campbell. 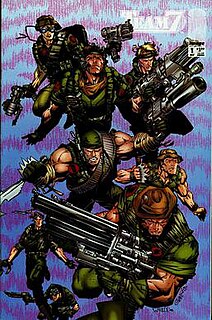 Team 7 is a comic book superhero team that appeared in titles published by Wildstorm Productions. The team has appeared in 3 self-titled miniseries: Team 7, Team 7: Objective Hell and Team 7: Dead Reckoning. The first 5-issue Gen¹³ limited series also involved members of Team 7. The team's members have played a major role throughout the Wildstorm Universe. In September 2011, The New 52 rebooted DC's continuity, bringing in Wildstorm characters, including Team 7. 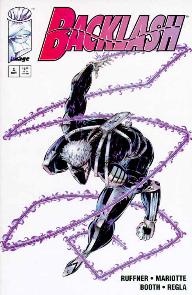 Backlash is a fictional character from the Wildstorm universe that first appeared in StormWatch #3 in 1993 and was featured in his own comic book series, which ran from 1994 to 1997. His daughter Jodi has adopted the name.

Freefall is the code name of a fictional comic book character Roxanne "Roxy" Spaulding from Wildstorm Comics. She is a member of the superhero team Gen¹³.

Robert "Bobby" Lane is the fictional superhero Burnout from Wildstorm Comics. He is best known as a member of the controversial superhero team Gen¹³.

Sarah Rainmaker is a fictional character, a superhero from the comic book series Gen¹³ created by Jim Lee and Brandon Choi and illustrated by J. Scott Campbell.

International Operations is a fictional American Intelligence Agency in Wildstorm comics. I.O. first appeared in WildC.A.T.S. volume 1 #1 and was created by Brandon Choi and Jim Lee.

Sublime is a comic book character from DC comic, Wildstorm. Her real name is Rachel Goldman, and she is a member of the super human team DV8.

Gen12 is a comic book series from Wildstorm by Brandon Choi with art by Michael Ryan. It was a 5-issue mini-series published in 1998. It featured characters from the series Team 7. It is also the codename for the subjects of a scientific experiment within the Wildstorm Universe. 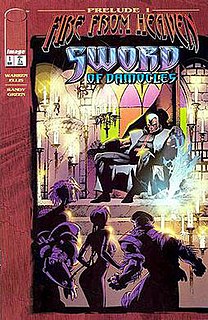 "Fire From Heaven" was a company-wide comics crossover event story arc published by American company WildStorm in 1996. The story ran across at least one issue of most WildStorm titles at the time and several independent one-shots. The story tied into many events happening in the WildStorm universe and, unlike many major crossovers of the time, Fire From Heaven had a lasting impact on many of the characters involved.

Gen-Active is a comic book anthology-series from Wildstorm. It was published quarterly from 2000 to 2001 and ran for six issues. In the comic book series, Gen-Actives are superhuman beings who possess the Gen-Factor.

The Kindred is a group of humanoid animals. They were introduced in a four-issue comic book mini-series published by Image Comics in 1994. Its writers were Jim Lee, Brandon Choi, Sean Ruffner and Brett Booth, who was also the artist. A second mini-series was published in 2002 under the Wildstorm imprint. Brett Booth was the sole writer and artist this time. Both series featured Grifter and Backlash fighting the Kindred.

The Wildstorm Universe is a fictional shared universe where the comic books published by Wildstorm take place. It represents an alternate history of the real world where ideas such as interstellar travel and superhuman abilities are commonplace. It is also the name of one of three brands launched by Wildstorm to help differentiate their titles set in the same universe from other, separate titles. Originally launched as part of the Image Universe, it broke off as its own separate universe during the "Shattered Image" storyline.

Gen¹³ is an animated American science-fiction action film based on the Gen¹³ comic book series published by WildStorm Productions which is a part of DC Comics. The film, released in 2000, was directed by Kevin Altieri and produced by WildStorm. The film was distributed by Buena Vista Pictures under the Touchstone Pictures banner and first screened for the general public at the Wizard World Chicago convention July 17–19, 1998.