Nelson Pass and the founding of Threshold

In the early 1970s, Nelson Pass was studying Physics at the University of California-Davis. While a student, he founded PMA to design and manufacture speakers. In 1972, he joined ESS speakers in Sacramento just prior to the arrival of Oscar Heil, who would design the Heil Air Motion Transformer which was a key component of the ESS AMT series of speakers. Pass worked at ESS designing crossovers and enclosures through 1973. He also was a service manager for Sun Stereo performing repairs on McIntosh Laboratory, Phase Linear, Pioneer Corporation and other brands of amplifiers, and began formulating his own amplifier designs in 1974. [1] Pass received his Bachelor of Science in Physics and with an ESS associate René Besne they together began development of a new amplifier in 1974. Besne worked on the industrial design of the amplifier while Pass worked on the circuit topology and component selection. When they were confident the amplifier was ready to market, Pass and Besne incorporated Threshold as co-founders in Sacramento, California on December 5, 1974. [2]

The first amplifier sold by Threshold was the model 800A, introduced in early 1975. This was a Class A 200 watt per channel five-stage amplifier with triple series/triple parallel/triple Darlington output stage with a dynamic bias circuit. [3] During development of the 800A, Pass and Besne met Joe Sammut, who later became a business partner in Threshold. [4] The second amplifier offered some months later was the 400A which featured 100 watts per channel. Threshold also released the NS 10 pre-amplifier in 1977.

The Threshold amplifiers drew the attention of audiophiles and editors at audio equipment magazines. In the late 1970s, Pass further developed his amplifier technology and Threshold began to market the STASIS line of amplifiers. This served as the basis of Threshold’s amplifier line throughout the 1980s. Pass was quoted as saying, “The Stasis 1 was the statement product for what became the popular Stasis product line, which served Threshold for the life of the company.” [5] In another interview, he stated: “The Stasis amplifier certainly stands out as probably the premier example of a simple, creative topology that’s done a very good job and stood the test of time.” [6] Virtually all Threshold amplifiers and pre-amplifiers displayed a luxurious look of "sculptured" brushed aluminum faceplates that were Besne's hallmarks of the entire line in keeping with the components’ substantial price. Some of the equipment was offered in black or clear (silver) anodized finish as well. In 1985 the Japanese audio company Nakamichi contacted Threshold to lease a patent license for the Stasis technology and consult with Nelson Pass, in order to design and market a few high-end stasis amplifiers. [7] The resulting Nakamichi PA-5, PA-7 and PA-7 series II amplifiers was sold successfully for several years as well as a few Nakamichi receivers also utilizing amplifier sections utilizing Stasis technology.

Pass was still chairman of Threshold when the November 1991 issue of Stereophile published their extensive interview with him. In subsequent interviews he stated he left Threshold at the end of 1991 to establish Pass Labs and have more autonomy in his amplifier design. Besne also left the firm. [6] [7] During the early 1990s, new amplifier designs known as the T Series were produced by design engineers Mikael Bladilaius, Mike Jaynes and Wayne Coburn. [8] The company also introduced a small line of more affordable amplifiers marketed under the name Forte. With the advent of Home Theater in the late 1990s, high-end audio companies in general and Threshold in particular struggled to retain its audiophile base of customers. Despite its reputation for building an excellent range of audio equipment, Threshold ceased operations sometime during this period. However, by 2000 new buyers had been found for the rights to the designs, tooling, inventory and the Threshold name. An upgraded range of amplifiers based on the proven Stasis technology were brought to market and successfully reestablished the company, known today as Threshold Audio. [9] 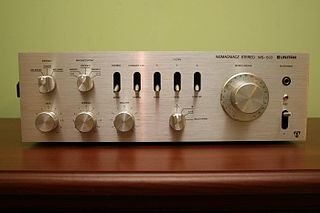 Mark Levinson is an American high-end audio equipment brand established in 1972 by eponymous founder Mark Levinson, and based in Stamford, Connecticut. It is owned by Harman International Industries, a subsidiary of South Korean company Samsung Electronics. 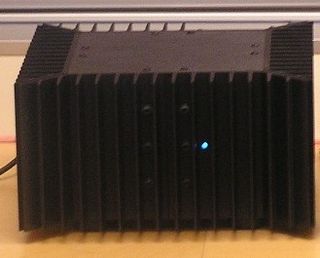 Pass Labs is a high-end-audio company based in Auburn, California, United States founded by Nelson Pass, a well-known figure in the high end audio community.

Founded by David Hafler and Ed Laurent in Philadelphia, Pennsylvania in 1955, Dynaco was an American hi-fi audio system manufacturer popular in the 1960s and 1970s for its wide range of affordable, yet high quality audio components.. Its best known product was the ST-70 tube stereo amplifier. They also manufactured other tube and solid state amplifiers, preamplifiers, radio tuners and bookshelf loudspeakers. Dynaco was liquidated in 1980, and the trademark is now owned by Radial Engineering Ltd.

Robert W. (Bob) Carver is an American designer of audio equipment based in the Pacific Northwest. 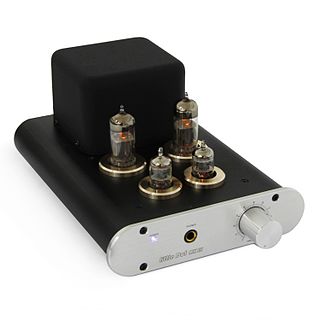 A headphone amplifier is a low-powered audio amplifier designed particularly to drive headphones worn on or in the ears, instead of loudspeakers in speaker enclosures. Most commonly, headphone amplifiers are found embedded in electronic devices that have a headphone jack, such as integrated amplifiers, portable music players, and televisions. However, standalone units are used, especially in audiophile markets and in professional audio applications, such as music studios. Headphone amplifiers are available in consumer-grade models used by hi-fi enthusiasts and audiophiles and professional audio models, which are used in recording studios.

Nelson Pass is a designer of audio amplifiers. Pass is vocal that listening tests remain valuable and that electrical measurements alone do not fully characterize the sound of an amplifier. Pass holds at least seven U.S. patents related to audio circuits.

Cary Audio Design is a company founded in May 1989 which originally designed and manufactured vacuum tube audio amplifiers. Since the mid-1990s they have expanded into the home theater market, producing DVD players and surround sound processors in addition to their original vacuum tube designs.

Boulder Amplifiers is a private corporation founded in Boulder, Colorado in 1983 by Jeff Nelson as a manufacturer of high-end, solid state professional audio electronics.

The Naim NAIT is an integrated amplifier from the British hi-fi manufacturer, Naim Audio. The original NAIT is one of the most recognisable pieces of hi-fi equipment ever made. Hi-fi critic Lucio Cadeddu recognised its legendary status, referring to it as "one of the most controversial and famous integrated amps in the history of HiFi".

The NAD 3020 is a stereo integrated amplifier by NAD Electronics, considered to be one of the most important components in the history of high fidelity audio. Launched in 1978, this highly affordable product delivered a good quality sound, which acquired a reputation as an audiophile amplifier of exceptional value. By 1998, the NAD 3020 had become the most well known and best-selling audio amplifier in history.