A thriambus (also spelled thriamb, thriambas, or thriambos; Greek θρίαμβος ) is a hymn to Dionysus, sung in processions in his honour, and at the same time an epithet of the god himself, according to Diodorus (4.5.2):

Thriambus is a name that has been given him, they say, because he was the first of those of whom we have a record to have celebrated a triumph (thriambos) upon entering his native land after his campaign, this having been done when he returned from India with great booty.

It was loaned into Old Latin via Etruscan as triumpus, in Classical Latin taking the form triumphus, the Roman triumph where the victorious general takes the role of Dionysus as leader of the procession, later associated with Iuppiter rather than Dionysus. Arrian traces the custom to Alexander the Great when he states ( Anabasis 6b.28):

Certain authors have said (though to me the statement seems incredible) that Alexander led his forces through Carmania lying extended with his Companions upon two covered waggons joined together, the flute being played to him; and that the soldiers followed him wearing garlands and sporting. Food was provided for them, as well as all kinds of dainties which had been brought together along the roads by the Carmanians. They say that he did this in imitation of the Bacchic revelry of Dionysus, because a story was told about that deity, that after subduing the Indians he traversed the greater part of Asia in this manner and received the appellation of Thriambus, and that for the same reason the processions in honour of victories after war were called thriambi.

The term's etymology is connected with the word θρῖον "fig leaf" by Aemilius Luetcke (1829) who refers to the epithet Συκίτης "of the fig tree" of Dionysus.

An old hypothesis is that the word is borrowed from Phrygian or Pelasgian, and literally means "Dreischritt", i. e., "three-step", compare iamb and dithyramb , but H. S. Versnel rejects this etymology and suggests instead a derivation from a cultic exclamation. [1]

From the time of Roman Greece (2nd century BC), the Greek term increasingly narrows to a translation of Latin triumphus . In Modern Greek, θρίαμβος is used in the same generalized meaning as English triumph . [2]

Hades, in the ancient Greek religion and myth, is the god of the dead and the king of the underworld, with which his name became synonymous. Hades was the eldest son of Cronus and Rhea, although the last son regurgitated by his father. He and his brothers, Zeus and Poseidon, defeated their father's generation of gods, the Titans, and claimed rulership over the cosmos. Hades received the underworld, Zeus the sky, and Poseidon the sea, with the solid earth, long the province of Gaia, available to all three concurrently. Hades was often portrayed with his three-headed guard dog Cerberus.

Venus is a Roman goddess, whose functions encompassed love, beauty, desire, sex, fertility, prosperity and victory. In Roman mythology, she was the ancestor of the Roman people through her son, Aeneas, who survived the fall of Troy and fled to Italy. Julius Caesar claimed her as his ancestor. Venus was central to many religious festivals, and was revered in Roman religion under numerous cult titles. 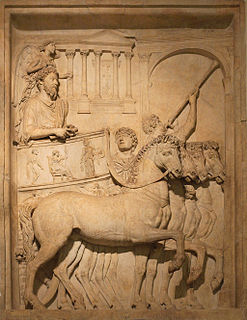 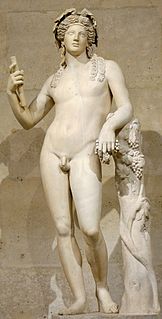 Dionysus or Dionysos is the god of the grape-harvest, winemaking and wine, of fertility, orchards and fruit, vegetation, insanity, ritual madness, religious ecstasy, festivity and theatre in ancient Greek religion and myth.

In ancient Roman religion and mythology, LiberLY-bər, Latin: [ˈliːbɛr]; "the free one"), also known as Liber Pater, was a god of viticulture and wine, fertility and freedom. He was a patron deity of Rome's plebeians and was part of their Aventine Triad. His festival of Liberalia became associated with free speech and the rights attached to coming of age. His cult and functions were increasingly associated with Romanised forms of the Greek Dionysus/Bacchus, whose mythology he came to share.

In ancient Greek religion and mythology, Iacchus was a minor deity, of some cultic importance, particularly at Athens and Eleusis in connection with the Eleusinian mysteries, but without any significant mythology. He perhaps originated as the personification of the ritual exclamation Iacche! cried out during the Eleusinian procession from Athens to Eleusis. He was often identified with Dionysus, perhaps because of the resemblance of the names Iacchus and Bacchus, another name for Dionysus. By various accounts he was a son of Demeter, or a son of Persephone, identical with Dionysus Zagreus, or a son of Dionysus.

Bona Dea was a goddess in ancient Roman religion. She was associated with chastity and fertility in Roman women, healing, and the protection of the state and people of Rome. According to Roman literary sources, she was brought from Magna Graecia at some time during the early or middle Republic, and was given her own state cult on the Aventine Hill.

In ancient Roman culture, felicitas is a condition of divinely inspired productivity, blessedness, or happiness. Felicitas could encompass both a woman's fertility and a general's luck or good fortune. The divine personification of Felicitas was cultivated as a goddess. Although felicitas may be translated as "good luck," and the goddess Felicitas shares some characteristics and attributes with Fortuna, the two were distinguished in Roman religion. Fortuna was unpredictable and her effects could be negative, as the existence of an altar to Mala Fortuna acknowledges. Felicitas, however, always had a positive significance. She appears with several epithets that focus on aspects of her divine power.

An iamb or iambus is a metrical foot used in various types of poetry. Originally the term referred to one of the feet of the quantitative meter of classical Greek prosody: a short syllable followed by a long syllable. This terminology was adopted in the description of accentual-syllabic verse in English, where it refers to a foot comprising an unstressed syllable followed by a stressed syllable.

The Dionysia was a large festival in ancient Athens in honor of the god Dionysus, the central events of which were the theatrical performances of dramatic tragedies and, from 487 BC, comedies. It was the second-most important festival after the Panathenaia. The Dionysia actually consisted of two related festivals, the Rural Dionysia and the City Dionysia, which took place in different parts of the year. They were also an essential part of the Dionysian Mysteries. 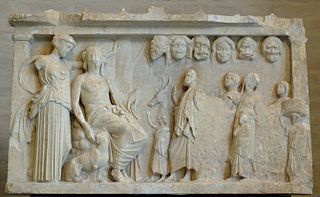 The dithyramb was an ancient Greek hymn sung and danced in honour of Dionysus, the god of wine and fertility; the term was also used as an epithet of the god: Plato, in The Laws, while discussing various kinds of music mentions "the birth of Dionysos, called, I think, the dithyramb." Plato also remarks in the Republic that dithyrambs are the clearest example of poetry in which the poet is the only speaker.

In Greek mythology and religion, the thiasus, was the ecstatic retinue of Dionysus, often pictured as inebriated revelers. Many of the myths of Dionysus are connected with his arrival in the form of a procession. The grandest such version was his triumphant return from "India", which influenced symbolic conceptions of the Roman triumph and was narrated in rapturous detail in Nonnus' Dionysiaca. In this procession, Dionysus rides a chariot, often drawn by big cats such as tigers, leopards, or lions.

Dushara, also transliterated as Dusares, is a pre-Islamic Arabian god worshipped by the Nabataeans at Petra and Madain Saleh.

The Cult of Dionysus was strongly associated with satyrs, centaurs, and sileni, and its characteristic symbols were the bull, the serpent, tigers/leopards, the ivy, and the wine. The Dionysia and Lenaia festivals in Athens were dedicated to Dionysus, as well as the Phallic processions. Initiates worshipped him in the Dionysian Mysteries, which were comparable to and linked with the Orphic Mysteries, and may have influenced Gnosticism. Orpheus was said to have invented the Mysteries of Dionysus.

Saturn was a god in ancient Roman religion, and a character in Roman mythology. He was described as a god of generation, dissolution, plenty, wealth, agriculture, periodic renewal and liberation. Saturn's mythological reign was depicted as a Golden Age of plenty and peace. After the Roman conquest of Greece, he was conflated with the Greek Titan Cronus, becoming known as a god of time. Saturn's consort was his sister Ops, with whom he fathered Jupiter, Neptune, Pluto, Juno, Ceres and Vesta.

In the constitution of ancient Rome, the lex curiata de imperio was the law confirming the rights of higher magistrates to hold power, or imperium. In theory, it was passed by the comitia curiata, which was also the source for leges curiatae pertaining to Roman adoption.

Gaius Junius Bubulcus Brutus was a Roman general and statesman, he was elected consul of the Roman Republic thrice, he was also appointed dictator or magister equitum thrice, and censor in 307 BC. In 311, he made a vow to the goddess Salus that he went on to fulfill, becoming the first plebeian to build a temple. The temple was one of the first dedicated to an abstract deity, and Junius was one of the first generals to vow a temple and then oversee its establishment through the construction and dedication process.

In ancient Rome, the pompa circensis was the procession that preceded the official games (ludi) held in the circus as part of religious festivals and other occasions. 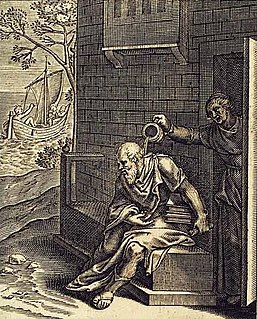 Iambus or iambic poetry was a genre of ancient Greek poetry that included but was not restricted to the iambic meter and whose origins modern scholars have traced to the cults of Demeter and Dionysus. The genre featured insulting and obscene language and sometimes it is referred to as "blame poetry". For Alexandrian editors, however, iambus signified any poetry of an informal kind that was intended to entertain, and it seems to have been performed on similar occasions as elegy even though lacking elegy's decorum. The Archaic Greek poets Archilochus, Semonides and Hipponax were among the most famous of its early exponents. The Alexandrian poet Callimachus composed "iambic" poems against contemporary scholars, which were collected in an edition of about a thousand lines, of which fragments of thirteen poems survive. He in turn influenced Roman poets such as Catullus, who composed satirical epigrams that popularized Hipponax's choliamb. Horace's Epodes on the other hand were mainly imitations of Archilochus and, as with the Greek poet, his invectives took the forms both of private revenge and denunciation of social offenders.