Thrill Seekers was a syndicated Four Star Television series that was produced in 1973 and 1974. It was hosted by Chuck Connors and featured people who did dangerous stunts. One of the series featured Australian stunt woman, Carol Cranston, who was working with the John Anderson Mustang Hell Drivers in the USA. Her episode of Thrill Seekers was shot at Terre Haute showgrounds, Indiana, where Cranston performed a high fall into cardboard boxes, did a hit and run at 30 mph, and was run over by a truck which drove over a plank placed across her midriff (see Cranston; also Crawford Productions). Another member of the Mustang Hell Drivers, Pat Jackson, performed in the series in which she jumped a pick-up truck from ramp to ramp. 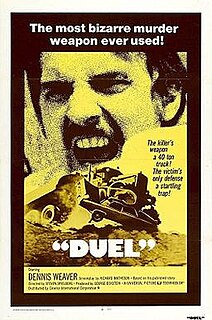 Duel is a 1971 American action thriller film written by Richard Matheson, which is based on his own short story. It is the feature full-length directorial debut of American director, producer, and screenwriter Steven Spielberg, and is distributed by Universal Pictures. 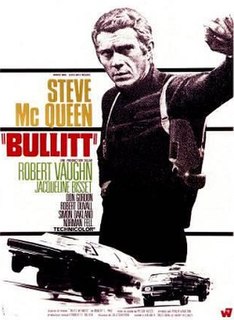 Bullitt is a 1968 American action thriller film directed by Peter Yates and produced by Philip D'Antoni. The picture stars Steve McQueen, Robert Vaughn, and Jacqueline Bisset. The screenplay by Alan R. Trustman and Harry Kleiner was based on the 1963 novel, Mute Witness, by Robert L. Fish, writing under the pseudonym Robert L. Pike. Lalo Schifrin wrote the original jazz-inspired score, arranged for brass and percussion. Robert Duvall has a small role as a cab driver who provides information to McQueen. The star of the movie, a 1968 Mustang Fastback, was sold at Mecum Auctions on Friday, January 10, 2020 for a record price of 3.4 million dollars, $3.7 million including auction fees. 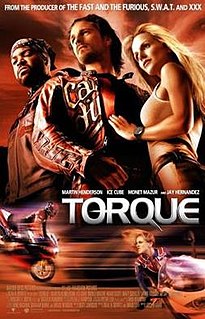 William Carey Loftin was an American professional stuntman, stunt coordinator and actor in the U.S. film industry. He is considered to be one of the film industry's most accomplished stunt drivers. In a lengthy career spanning 61 years, his body of work included classic films such as Thunder Road, Bullitt, Vanishing Point, Duel, and The French Connection. He was inducted into the AMA Motorcycle Hall of Fame in 2001. 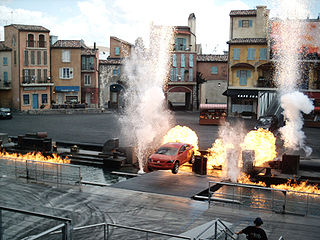 The Moteurs... Action! Stunt Show Spectacular or Lights, Motors, Action! Extreme Stunt Show is a stunt show performed at Walt Disney Studios Park in Disneyland Paris and formerly performed at Disney's Hollywood Studios theme park in Lake Buena Vista, Florida. The Moteurs... Action! show originally premiered with the Walt Disney Studios Park when it opened in March 2002. The Lights, Motors, Action! version of the show debuted three years later at Disney's Hollywood Studios as part of the Happiest Celebration on Earth festival, in which each of the four Walt Disney World theme parks opened a new attraction that been copied from another Disney resort.

The Car is a 1977 American horror film directed by Elliot Silverstein and written by Michael Butler, Dennis Shryack and Lane Slate. The film stars James Brolin, Kathleen Lloyd, John Marley and Ronny Cox, along with real-life sisters Kim and Kyle Richards. It tells the story of a mysterious car which goes on a murderous rampage, terrorizing the residents of a small town.

Skiing is an automotive driving stunt where the car is driven while balanced only on two wheels, either the pair on the driver side or on the passenger side.

Mara Reyes is a Mexican stock car racing driver. Finding some success in the NASCAR Mexico Series, she started one race in what is now the NASCAR Xfinity Series in 2005. Reyes currently races in the Super Copa Telcel with Arris Group sponsorship. 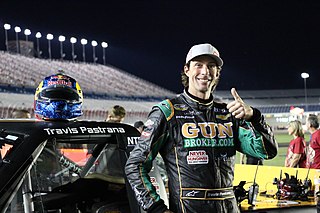 Travis Alan Pastrana is an American professional motorsports competitor and stunt performer who has won championships and X Games gold medals in several events, including supercross, motocross, freestyle motocross, and rally racing. He runs a show called Nitro Circus, and previously competed in the NASCAR Nationwide Series for Roush Fenway Racing the Global RallyCross Championship for Subaru Rally Team USA, and the Monster Jam circuit, in his own Pastrana 199 truck. 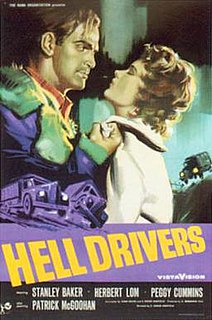 Hell Drivers (1957) is a British film drama directed by Cy Endfield and starring Stanley Baker, Herbert Lom, Peggy Cummins and Patrick McGoohan. The film was produced by the Rank Organisation and Aqua Film Productions. The film revolves around a recently released convict who takes a driver's job at a haulage company. 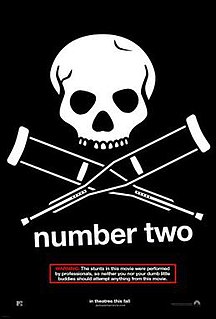 Jackass Number Two is a 2006 American reality comedy film directed by Jeff Tremaine. It is the sequel to Jackass: The Movie (2002), both based upon the MTV series Jackass. Like its predecessor and the original television show, the film is a compilation of stunts, pranks and skits. The film stars the regular Jackass cast of Johnny Knoxville, Bam Margera, Steve-O, Chris Pontius, Ryan Dunn, Dave England, Wee Man, Ehren McGhehey, and Preston Lacy.

New Year No Limits was an annual American television special that aired on ESPN from December 31, 2007 until January 1, 2012. It was created, hosted and sponsored by Red Bull. The program usually aired after the Chick-fil-A Bowl until 1 AM Eastern time.

Jacqueline Balmer, known professionally as Jacquie de Creed, was an English stuntwoman and presenter, and holder of the Long Distance Car Ramp Jump Record. During the 1980s she became famous in the United Kingdom for staging a series of spectacular car stunts. Along with her husband, de Creed was killed in an air crash while flying through dense fog en route from Italy to the French town of Troyes.

Asphalt Overdrive is a 2014 "endless runner" video game published by Gameloft and developed by their Madrid studio. It is a spinoff of the Asphalt series and the eleventh title overall. After a showcase in June 2014 at the E3 event, it was released in September 24, 2014 for iOS, Android and Windows Phone, Windows 8.1. The game is officially retired and no longer supported. 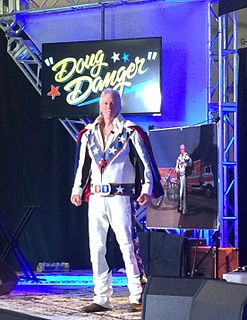 Earl "Lucky" Teter was an American stunt driver, showman and entrepreneur. He pioneered and popularized the touring stunt driving show, performing across the country until his death in a car jumping stunt.