Thrinacoselache is an extinct genus of basal elasmobranch from the Serpukhovian-aged lagerstatte, Bear Gulch, of what is now Montana. [1] 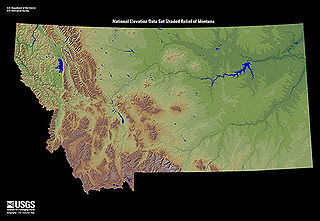 Western Montana is the western region of the U.S. state of Montana. The most restrictive definition limits western Montana only to the parts of the state west of the Continental Divide. Other common definitions add in the mountainous areas east of the divide including Beaverhead, Gallatin, Jefferson, Lewis and Clark, Madison, and Park Counties. The region is sometimes considered to be part of the Inland Northwest.

The Mann Gulch fire was a wildfire reported on August 5, 1949, in a gulch located along the upper Missouri River in the Gates of the Mountains Wilderness, Helena National Forest, in the U.S. state of Montana. A team of 15 smokejumpers parachuted into the area on the afternoon of August 5, 1949, to fight the fire, rendezvousing with a former smokejumper who was employed as a fire guard at the nearby campground. As the team approached the fire to begin fighting it, unexpected high winds caused the fire to suddenly expand, cutting off the men's route and forcing them back uphill. During the next few minutes, a "blow-up" of the fire covered 3,000 acres (1,200 ha) in ten minutes, claiming the lives of 13 firefighters, including 12 of the smokejumpers. Only three of the smokejumpers survived. The fire would continue for five more days before being controlled. 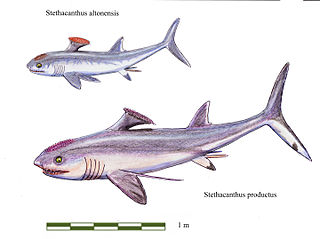 is an extinct genus of shark-like holocephalian which lived from the Late Devonian to Late Carboniferous epoch, dying out around 298.9 million years ago. Fossils have been found in Asia, Europe and North America.

Alder Gulch is a place in the Ruby River valley, in the U.S. state of Montana, where gold was discovered on May 26, 1863, by William Fairweather and a group of men including Barney Hughes, Thomas Cover, Henry Rodgers, Henry Edgar and Bill Sweeney who were returning to the gold fields of Grasshopper Creek, Bannack, Montana. They were on their way to Yellowstone Country from Bannack but were waylaid by a band of Crow Indians. After being ordered out of Crow hunting grounds, they crossed the East Slope of the Tobacco Root Mountains and camped for the night in Elk Park, where William "Bill" Fairweather and Henry Edgar discovered gold, while the remaining party was out hunting for meat. Agreeing to keep the new discovery quiet the group of miners returned to the town of Bannack for supplies. However, word leaked out about the new strike, and miners followed the Fairweather party out of town. The party stopped at the Point of Rocks, part way between Bannack and Alder Gulch, and established the Fairweather Mining District in a miners meeting. It was agreed that the discoverers were entitled to two claims and first choice. The first stampede of miners reached Alder Gulch June 6, 1863, and the population swelled to over 10,000 in less than 3 months. The "Fourteen Mile City" ran the length of the gulch, and included the towns of Junction City, Adobe Town, Nevada City, Central City, Virginia City, Montana, Bear Town, Highland, Pine Grove French Town, Hungry Hollow, and Summit. Upon arrival the miners lived in brush wickiups, dugouts and under overhanging rocks until cabins could be built. The first structure built in Virginia City was the Mechanical Bakery. Virginia City, and Nevada City were the centers of commerce during the height of the Alder Gulch gold rush. In the first year the area had over 10,000 people living there. Montana Territory was established in May 1864, and the first territorial capital was Bannack. The capital then moved to Virginia City, where it remained until 1875. The Alder Gulch diggings were the richest gold placer deposits ever discovered, and in three years $30,000,000 was taken from them, with $10,000,000 taken out in the first year. Nowadays, except during summertime, the streets of Virginia City are usually quiet and relatively few visitors find their way to the 16 ton granite monument that marks the spot of that incredible discovery of May 26, 1863. 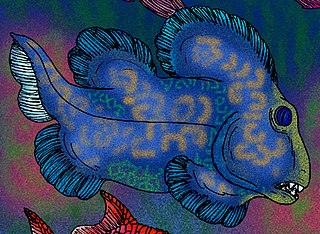 Belantsea is a genus of extinct petalodontid cartilaginous fish that lived during the Lower Carboniferous, about 350 million years ago. Its fossils are found in the Bear Gulch Limestone lagerstätte. Its body was leaf-shaped, with muscular fins and a small tail. Such a body plan would allow for great maneuverability, but at the cost of speedy cruising. Its few, large, triangular teeth formed a beak-like arrangement that allowed it to graze bryozoans, sponges, crinoids, and other encrusting animals. The genus contains two species, B. montana and B. occidentalis. 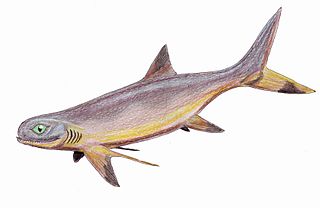 Symmoriiformes is an extinct order of holocephalians. Originally named Symmoriida by Zangerl (1981), it has subsequently been known by several other names. Lund (1986) synonymized the group with Cladodontida, while Maisey (2008) corrected the name to Symmoriiformes in order to prevent it from being mistaken for a family. The symmoriiform fossils record appear at the beginning of the Carboniferous. Most of them died out at the start of the Permian, but Dwykaselachus is known from the Artinskian-Kungurian of South Africa. However, teeth described from the Valanginian of France and Austria indicates that members of the family Falcatidae might have survived until the Early Cretaceous.

Falcatus is an extinct genus of falcatid chondrichthyan which lived during the early Carboniferous Period in Bear Gulch bay and what is now Montana. 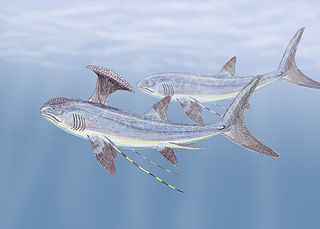 Stethacanthidae is an extinct family of prehistoric holocephalians. It is estimated to have existed approximately between 380 and 300 million years ago. Members of this family are noted for their peculiar dorsal fin.

Delphyodontos dacriformes is a prehistoric holocephalid fish from the middle Carboniferous-aged Bear Gulch Limestone Lagerstätte, during the Bashkirian Stage in Montana. The adult form is unknown, as the only fossil specimens are of aborted fetuses or recently born young. Sharp teeth and fecal matter in the fossils suggests that Delphyodontos practiced intrauterine cannibalism, like some modern sharks, such as sand tiger sharks. 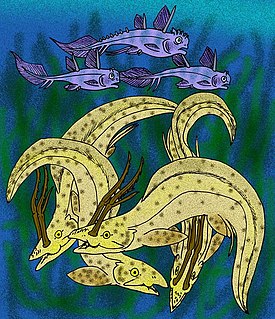 Harpagofututor is an extinct genus of cartilaginous fish from the Mississippian of North America. 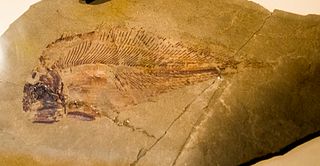 Allenypterus is a genus of a prehistoric lobe-finned fish which lived during the Bashkirian stage of the Late Carboniferous period, 318 million years ago). Fossils have been discovered in Bear Gulch Limestone, Montana, USA.

Netsepoye is an extinct genus of cartilaginous fish distantly related to the modern order Chimaeriformes, containing the single species Netspoye hawesi. It lived more than 320 million years ago during the Late Mississippian.

Caridosuctor populosum is an extinct species of coelacanth that lived during the Carboniferous period. Fossils have been found in the Bear Gulch lagerstätte in Montana. 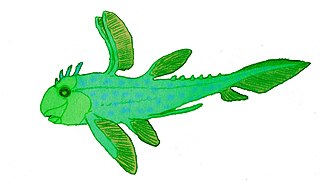 Echinochimaera is an extinct genus of fish, it was assigned to the order chimaera by Jack Sepkoski in 2002. The genus' name derives from the Greek εχινό (echino) meaning spiny, and chimaera.

Aeschronectida is an extinct order of mantis shrimp-like crustaceans which lived in the Mississippian subperiod in what is now Montana. 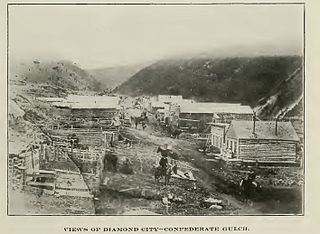 Confederate Gulch is a steeply incised gulch or valley on the west-facing slopes of the Big Belt Mountains in the U.S. state of Montana. Its small stream drains westward into Canyon Ferry Lake, on the upper Missouri River near present-day Townsend, Montana. In 1864, Confederate soldiers on parole during the American Civil War made a minor gold discovery in the gulch, but the discovery of the sensationally rich Montana Bar the following year—one of the richest placer strikes per acre ever made—led to other rich gold strikes up and down the gulch, and touched off a frantic boom period of placer gold mining in the area that extended through 1869. From 1866 to 1869, the gulch equaled or outstripped all other mining camps in the Montana Territory in gold production, producing an estimated $19–30 million worth of gold. For a time, Confederate Gulch was the largest community in Montana. In 1866, Montana had a total population of 28,000, and of these, about 10,000 (35%) were working in Confederate Gulch.

Hardistiella montanensis is a fossil fish and extinct species of lamprey found at the Bear Gulch Limestone site in the U.S. state of Montana.

Bealbonn is an extinct genus of early shark from the Carboniferous. It is known by a singular species, B. rogaire. It is known from the Serpukhovian-aged lagerstätte of the Bear Gulch Limestone of Montana, USA. It is one of the genera included in the early shark family Gregoriidae.

Gregoriidae is an extinct family of early sharks from the Carboniferous period. It currently includes three described genera: Gregorius, Srianta, and Bealbonn. This family includes remains formerly ascribed to "Desmiodus," which is now considered a nomen vanum. The relationships between the included genera are not entirely clear. Fossils are known from Serpukhovian-aged formations including the Bear Gulch Limestone and Surprise Canyon Formation.