Thrinay is a word from sanskrit language. It has multiple meanings. Trina means throne in Sanskrit. The word Thrinay means one who is seated on throne. It is mainly used to describe Gods and Goddesses in Hindu religion. It is used more in Devi Mahatmya to address Saraswati, one of the three supreme goddesses of Hindu religion. In some Puranas (like Skanda Purana) Saraswati is considered the daughter of Shiva (Shivaanujaa) and in some Tantras she is associated with Ganesha as his sister.

Some also consider Thrinay as one of the names of Lord Shiva. 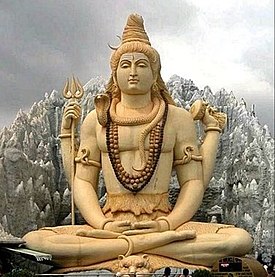 Shiva, also known as Mahadeva, is one of the principal deities of Hinduism. He is the Supreme Being in Shaivism, one of the major traditions within Hinduism.

Hindu deities are the gods and goddesses in Hinduism. The terms and epithets for deity within the diverse traditions of Hinduism vary, and include Deva, Devi, Ishvara, Ishvari, Bhagavān and Bhagavati. 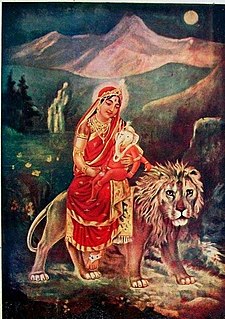 Parvati, Uma or Gauri is the Hindu goddess of fertility, love, beauty, harmony, marriage, children, and devotion; as well as of divine strength and power. Known by many other names, she is the gentle and nurturing form of the Supreme Hindu goddess Adi Parashakti and one of the central deities of the Goddess-oriented Shakti sect called Shaktism. She is the Mother goddess in Hinduism, and has many attributes and aspects. Along with Lakshmi and Saraswati, she forms the trinity of Hindu goddesses (Tridevi). 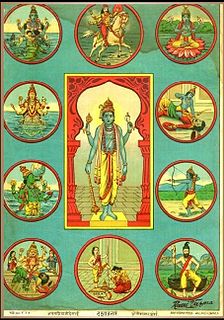 An avatar, a concept in Hinduism that means "descent", is the material appearance or incarnation of a deity on earth. The relative verb to "alight, to make one's appearance" is sometimes used to refer to any guru or revered human being.

Rati is the Hindu goddess of love, carnal desire, lust, passion and sexual pleasure. Usually described as the daughter of Prajapati Daksha, Rati is the female counterpart, the chief consort and the assistant of Kama (Kamadeva), the god of love. A constant companion of Kama, she is often depicted with him in legend and temple sculpture. She also enjoys worship along with Kama. 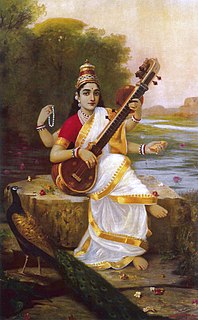 Saraswati, also known as Sharada, is the Hindu goddess of knowledge, music, art, speech, wisdom, and learning. She is a part of the trinity (Tridevi) of Saraswati, Lakshmi, and Parvati. All the three forms help the trinity of Brahma, Vishnu, and Shiva to create, maintain, and regenerate the Universe, respectively.

Matangi is a Hindu goddess. She is one of the Mahavidyas, ten Tantric goddesses and an aspect of Devi, the Hindu Divine Mother. She is the goddess of music and learning. Matangi governs speech, music, knowledge and the arts. Her worship is prescribed to acquire supernatural powers, especially gaining control over enemies, attracting people to oneself, acquiring mastery over the arts and gaining supreme knowledge.

Gayatri is the personified form of popular Gayatri Mantra, a hymn from Vedic texts. She is also known as Savitri and Vedamata. Gayatri is often associated with Savitr, a solar deity in the vedas. According to many texts like Skanda Purana, Gayatri is another name of Saraswati or her form and is the consort of Lord Brahma. However, Saivite texts identify Mahagayatri as the consort of Shiva, in his highest form of Sadasiva with five heads and ten hands

Deva means "heavenly, divine, anything of excellence", and is also one of the terms for a deity in Hinduism. Deva is a masculine term; the feminine equivalent is Devi.

Sati, also known as Dakshayani, is the Hindu goddess of marital felicity and longevity, and is worshipped as an aspect of the mother goddess Shakti. She was the first wife of Shiva, other being Parvati, who was her reincarnation after her death.

Chandi or Chandika is a Hindu deity. She represents the power of Shakti. Chandika is a powerful form of the Goddess Parvati, who manifested into Chandi to destroy evil.

Shukra is a Sanskrit word that means "clear" or "bright". It also has other meanings, such as the name of an ancient lineage of sages who counselled Asuras in Vedic mythology. In medieval mythology and Hindu astrology, the term refers to the planet Venus, one of the Navagrahas.

Kāla is a word used in Sanskrit to mean "time". It is also the name of a deity, in which sense it is not always distinguishable from kāla, meaning "black". It is often used as one of the various names or forms of Yama.

The Brahmavaivarta Purana is a voluminous Sanskrit text and a major Purana (Maha-purana) of Hinduism. It centers around Krishna and Radha, is a Vaishnavism text, and is considered one of the modern era Purana.

Matrikas also called Matar or Matri, are a group of mother goddesses who are always depicted together in Hinduism. Matrikas are the different forms of Adi Parashakti. Matrikas are the personified powers of different Devas. Brahmani emerged from Brahma, Vaishnavi from Vishnu, Maheshvari from Shiva, Indrani from Indra, Kaumari from Skanda, Varahi from Varaha and Chamunda from Devi, and additionals are Narasimhi, Vinayaki.

Ganesha, or Ganesh, also known as Ganapati and Vinayaka, is one of the best-known and most worshipped deities in the Hindu pantheon. His image is found throughout India, Nepal, Sri Lanka, Thailand, Bali (Indonesia) and Bangladesh and in countries with large ethnic Indian populations including Fiji, Mauritius and Trinidad and Tobago. Hindu denominations worship him regardless of affiliations. Devotion to Ganesha is widely diffused and extends to Jains and Buddhists. He is also popular in Japan as Kangiten. 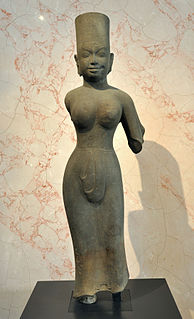 Devī is the Sanskrit word for 'goddess'; the masculine form is deva. Devi and deva mean 'heavenly, divine, anything of excellence', and are also gender-specific terms for a deity in Hinduism.

Brahma is the creator god in Hinduism. He is also known as Svayambhu (self-born), Vāgīśa, and the creator of the four Vedas, one from each of his mouths. Brahma is consort of Saraswati and he is the father (creator) of Four Kumaras, Narada, Daksha, Marichi and many more. Brahma is synonymous with the Vedic god Prajapati, he is also known as Vedanatha, Jnaneshwara, ChaturmukhaSvayambhu, etc, as well as linked to Kama and Hiranyagarbha. He is more prominently mentioned in the post-Vedic Hindu epics and the Puranas. In the epics, he is conflated with Purusha. Although Brahma is part of the Brahma-Vishnu-Shiva Trimurti, ancient Hindu scriptures mention multiple other trinities of gods or goddesses which do not include Brahma. 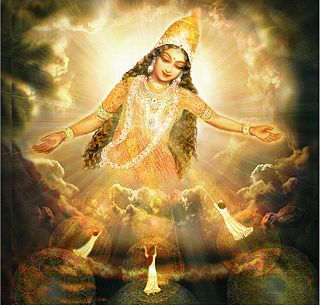 Adi Parashakti is term which means primordial energy or primordial force, denoting the Supreme Goddess or Divine Mother in Hinduism. The goddess is also popularly referred to as "Parama Shakti", "Adi Shakti", "Mahashakti", "Aadhya Shakti", Satyam Shakti, or even simply as "Shakti". Shaktas believe Adi Parashakti as the Supreme Being, manifested as the triple goddesses Saraswati, Lakshmi and Parvati. The Shakta-Shaivism consider Parvati as her primary form, while the Vaishnavism traditions consider it to be Lakshmi or Radha.