Thrippunithura or Tripunithura ( Malayalam pronunciation: ​ [t̪r̥ipːuːɳit̪ːurɐ] ), is a prominent historical and residential region in the City of Kochi in Kerala, India. Located about 7 km (4 mi) from the city centre, Tripunithura was the capital of the erstwhile Kingdom of Cochin. The descendants of the Cochin royal family still live in the palaces here. The Hill Palace situated in Tripunithura was the palace of Maharaja of Cochin, the ruler of Kingdom of Cochin. Tripunithura is also well known for its historical cultures and worldwide famous because of Sree Poornathrayeesa Temple and the annual festival Vrishchikoltsawam that takes place at the temple.

Some latter day Sanskrit enthusiasts describe the origin of the name to "pūrṇa vēda puri" — the town of Vedas in its entirety. Another possible origin to name comes from the meaning "the land on the shores of Poorna river" above doesn't give sense. Thirupunithra = Thiru punitha thara (or Thiru Punitha Thura) means the land that which is holy(thara literally means a platform or an elevated stage). Pooni might also refer to the bag used to carry arrows.[ citation needed ]

The 'Raja nagari' or the royal city is one of the most prominent centers of traditional Kerala cultural heritage. The palaces of the Cochin Royal House are renowned for being patrons of traditional arts, architecture,literature and music. The erstwhile rulers of Kingdom of Cochin were great patrons of art. This made fine arts and architecture flourish under them in many ways. The town is also a prominent centre of learning for classical arts like Carnatic music, Kathakali and Mohiniyattam besides percussion instruments like mridangam, chenda and maddalam. Much of this is facilitated by the RLV College of Music and Institute of Fine Arts was established here in 1956. [2] Another center of learning is Kerala Kalalayam which was established by Kathakali artist Padmashree Kalamandalam Krishnan Nair and Mohiniyattam artist Kalamandalam Kalyanikutty Amma in 1952. Tripunithura has many dedicated centers for stage performances and promotion of art established by the royal family[ citation needed ]

The famous Bhagavathi temple in Chottanikkara village is located just 5 km away from Thrippunithura towards the south-east.

There are many restaurants and hotels in and around Tripunithura. There are several eateries which offers excellent vegetarian choices and sweets. The Statue Junction of the town is filled with many refreshment centres including restaurants and juice bars. The main lodgings available are in Vadakkekota - Prasanth Hotel and also many others. The Abhishekam Convention Hall is one of the meeting halls available in Tripunithura.[ citation needed ]

Thrippunithura is administered by an elected municipal council headed by the chairperson. LDF is currently ruling the municipality with Rema Santhosh as its chairperson.

There are also a few privately managed CBSE schools, namely, Bhavans Vidya Mandir, Chinmaya Vidyalaya, Sree Narayana Vidya Peetam Public School, the Nair Service Society (NSS) Higher Secondary School, The Choice School which function in various parts of the town to provide the necessary basics and also higher education for children. The landmark of the town is the RLV Music College which provides proteges with training in Classical music and has also produced many great singers most notably K. J. Yesudas.

Thripunithura is surrounded by stretches of Vembanad Lake and Canals which sustain inland navigation. The town is situated almost 8 meters above Mean Sea Level. The town is extends up to the East Till Thiruvankulam.

Tripunithura has a main bus-stand in its main centre with buses going from and coming into from different locations. Furthermore, it has bus-stops in almost every part of the town which makes travel by bus easier. Railway transport is also available. NH 85(Kochi Madurai highway) or Old NH 49 passes through Karingachira. Ernakulam-Ettumanoor State Highway(SH 15) also passes through Thrippunithura.

Aluva is a region in Kochi City in Kerala, India. It is also a part of the Kochi metropolitan area and is situated around 15 km (9.3 mi) from the city center on the banks of Periyar River. A major transportation hub, with easy access to all major forms of transportation, Aluva acts as a corridor which links the highland districts to the rest of Kerala. Cochin International Airport at Nedumbassery is 11.7 km from Aluva. Aluva is accessible through rail, air, metro along with major highways and roadlines. Aluva KSRTC bus station is an important transport hub in Kerala and one of the busiest stations in central part of the state.

Perumbavoor is a place located at bank of Periyar in Ernakulam District in the Indian state of Kerala. It is a part of the Kochi metropolitan area. It lies in the north-eastern tip of the Greater Cochin area and is also the headquarters of Kunnathunad Taluk. Perumbavoor is famed in the state for wood industries and small-scale industries. Ernakulam lies 30 km southwest of Perumbavoor. The town lies between Angamaly and Muvattupuzha on the Main Central Road (MC), which connects Thiruvananthapuram to Angamaly through the old Travancore part of Kerala.

Sree Poornathrayesa temple is a Hindu temple situated in Tripunithura, Kochi, the capital of the former Kingdom of Cochin, Kerala, India. The temple is considered among the greatest temples in Kerala and was the first among eight royal temples of the erstwhile Kochi Kingdom. The deity was also considered the national deity of Cochin and protector guardian of Tripunithura. The deity in this temple is Lord Vishnu, who is in the form of Santhanagopala Murthy. Lord Poornathrayeesa is known for his love of elephants. Hence more than 40 elephants participate in his Vrishchikotsavam. And most of the elephants are sent for the utsavam (festival) without a money return expected by the elephant owners as Poornathrayeesa is considered to be an elephant lover. 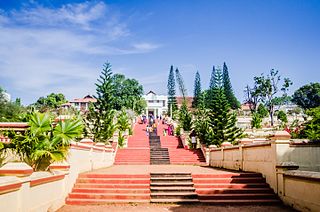 Hill Palace is an archaeological museum and palace located in the Tripunithura neighbourhood of Kochi city in the Indian state of Kerala. It is the largest archeological museum in the state and was the imperial administrative office and official residence of the Cochin Maharaja. Built in 1865, the palace complex consists of 49 buildings in the traditional architectural style, spreading across 54 acres (220,000 m2). The complex has an archaeological museum, a heritage museum, a deer park, a pre-historic park and a children's park. The campus of the museum is home to several rare species of medicinal plants. Presently the palace has been converted into a museum by The Kerala State Archaeology Department and is open to public. The palace is about 10 kilometres (6.2 mi) from the city centre and is reachable by road and rail. 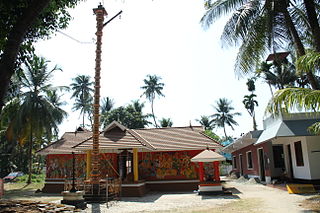 Poonithura is a region in the city of Kochi in Kerala, India. It features one of the popular temples in Ernakulam and it has historical links to the Sree Poornathrayeesa Temple in Tripunithura.

Varavoor, a lush green residential village in Thrissur district is in the state of Kerala, India. It is widely believed that this village was situated on the banks of Bharathapuzha during prehistoric times. Shrinking of the river over several millennia of human settlements has moved the village more distant from its banks. It is surrounded by small green hills and is 30 mins drive away from the cultural capital of Kerala. Varavoor was declared "litigation-free" village on 7 May 2000. Climatic conditions in and around Varavoor varies around the year. The well-known Palakkal Pooram is usually held in the month of February welcoming tourists from different parts of the country. During the month of February, paddy fields surrounding the Palakkal temple is usually fallow after harvest, making it ideal location for gathering for the pooram festivities and for fireworks at night.

Radha Lakshmi Vilasam "RLV" College of Music and Fine Arts is an academic institution situated in Thripunithura, Kochi in the state of Kerala, India. It is affiliated to the Mahatma Gandhi University and offers graduate and postgraduate courses in music, performing arts and visual arts. The current principal is Prof. C.J Suseela

K. Babu is an Indian politician and the former Minister for Fisheries, Ports and Excise, Government of Kerala. He is the representative of Thripunithura constituency in Kerala from 1991 to 2016 and again from 2021. 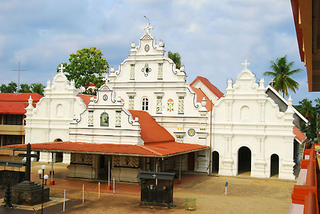 Tripunithura railway station is a railway terminal located at Tripunithura, Kochi, in the Indian state of Kerala. The station is on the rail route between Thiruvananthapuram Central and Ernakulam Junction via Kottayam.

Kalamandalam Rajan is a Kathakali exponent from Kerala, India. He has been honored with several noted awards including the Sangeet Natak Akademi Award 2009, Kerala Sangeetha Nataka Akademi Gurupooja award 2006 and awards from Kerala Kalamandalam.

Tripunithura N. Radhakrishnan is a Ghatam exponent from Kerala, India. He is the first artist to receive the noted Kerala Sangeetha Nataka Akademi Fellowship for Ghatam. He has played the Ghatam in tens of thousands of venues across hundreds of countries.

Wikimedia Commons has media related to Thripunithura .
This page is based on this Wikipedia article
Text is available under the CC BY-SA 4.0 license; additional terms may apply.
Images, videos and audio are available under their respective licenses.