HeartBeet Organic Superfoods Cafe (formerly Thrive Cafe) is a counter service vegan restaurant in the Roosevelt neighborhood of Seattle, Washington in the United States. Its lunch and dinner offerings include a high-percentage of raw foods. 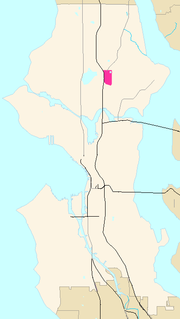 Entrance and interior of Thrive Cafe in 2014

Thrive Cafe was opened on December 17, 2008 by Monika Kinsman, a Seattle native. It is currently in the process of raising funds to expand its business to open several additional locations in the Puget Sound area. The name is registered as a trademark by Minerva Organics LLC, a Washington State Limited Liability Company. [1] [2] 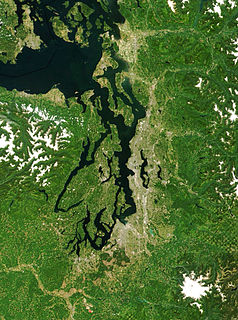 Puget Sound is a sound along the northwestern coast of the U.S. state of Washington, an inlet of the Pacific Ocean, and part of the Salish Sea. It is a complex estuarine system of interconnected marine waterways and basins, with one major and two minor connections to the open Pacific Ocean via the Strait of Juan de Fuca—Admiralty Inlet being the major connection and Deception Pass and Swinomish Channel being the minor.

In July 2012, the cafe was burglarized: the loss of computers and business equipment having a "significant impact" on the business, according to the owner. [3]

In 2013, Thrive hosted the "Fresh Film and Speaker Series" at Central Cinema. [4]

Thrive Cafe won the online poll for "Best Healthy Lunch" in 2011 in the annual "Best of" poll, promoted by Evening Magazine in Seattle. [5]

In 2013, it was featured in an article in USA Today , "10 Great Places Where Vegetarians Don't Sacrifice Flavor". [6] 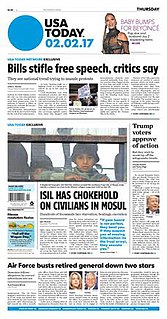 USA Today is an internationally distributed American daily, middle-market newspaper that serves as the flagship publication of its owner, the Gannett Company. The newspaper has a generally centrist audience. Founded by Al Neuharth on September 15, 1982, it operates from Gannett's corporate headquarters on Jones Branch Drive, in McLean, Virginia. It is printed at 37 sites across the United States and at five additional sites internationally. Its dynamic design influenced the style of local, regional, and national newspapers worldwide, through its use of concise reports, colorized images, informational graphics, and inclusion of popular culture stories, among other distinct features.

In 2016, in won the online poll for "Best Gluten Free" in 2016 in the annual "Best of" poll, promoted by Evening Magazine in Seattle. 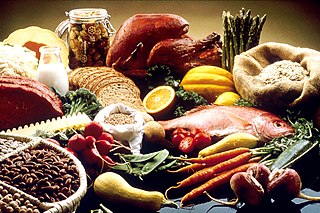 Food is any substance consumed to provide nutritional support for an organism. It is usually of plant or animal origin, and contains essential nutrients, such as carbohydrates, fats, proteins, vitamins, or minerals. The substance is ingested by an organism and assimilated by the organism's cells to provide energy, maintain life, or stimulate growth.

Pad thai, or phad thai, is a stir-fried rice noodle dish commonly served as a street food and at most restaurants in Thailand.

Alice Louise Waters is an American chef, restaurateur, activist and author. She is the owner of Chez Panisse, a Berkeley, California restaurant famous for its organic, locally grown ingredients and for pioneering California cuisine, which she opened in 1971.

Beth's Cafe is a 24-hour restaurant in Seattle, Washington. Located on Aurora Avenue North in the Green Lake neighborhood, it is known largely for its "greasy spoon" cuisine and large portions. Beth's opened in 1954 and remains much the same despite a small fire in the late 1990s.

Cafe Gratitude is a small chain of restaurants serving organic, plant-based (vegan) food. There are five locations in the Los Angeles area, in Newport Beach, Venice, Larchmont Village, Beverly Hills, and in the Downtown Arts District. There are additional locations in Kansas City, Missouri, and San Diego. A fifth restaurant in Berkeley, California, closed in 2015 after operating for 10 years, and a restaurant in San Francisco, California closed in 2011 after operating for 7 years

The George Street Co-op is a food cooperative located in New Brunswick, New Jersey. The George Street Co-op runs a retail store at 89 Morris Street, selling foods and select hygiene and household products to the general public and to its membership. The Co-op, as it is known to its members, maintains a focus on offering vegetarian, organic, local food, naturally grown and fair trade products. This focus on vegetarian fare extends to The Namaste Cafe upstairs. The space upstairs also serves as a community space for everything from yoga classes to comedy shows.

Beecher's Handmade Cheese is an artisan cheesemaker and retail shop with locations in the Pike Place Market, Seattle, Washington and New York City's Flatiron District. The company was founded by Kurt Beecher Dammeier in 2003 and opened in the Pike Place Market after Dammeier obtained a difficult to obtain storefront lease in the Market. Because Dammeier had never been a cheesemaker, he sought out the assistance of Brad Sinko, who helped run a family cheese-making business in Oregon. A second location was opened in 2011 in the Flatiron neighborhood of Manhattan in New York City.

J&D's Down Home Enterprises, also known as J&D's Foods, is an American company based in Seattle, Washington, that produces bacon-related products such as Bacon Salt and Baconnaise. The company was founded in 2007 by Justin Esch and Dave Lefkow who used a $5,000 prize winning from America's Funniest Home Videos as start capital to launch the business. J&D's used an unconventional, yet successful advertising campaign consisting of on-line Social network services and personal telephone calls to the media to get stories written about them resulting in selling 20,000 jars of their initial product, Bacon Salt, in their first five months of operation. The business continues to be successful and has since added several new products to the Bacon Salt range.

French Meadow Bakery is a privately held bakery located in the Uptown neighborhood of Minneapolis, Minnesota, United States that produces gluten-free, vegan, yeast-free and kosher parve foods. It is one of the longest running certified organic bakeries in the country. The bakery is currently certified organic by the USDA and Quality Assurance International, certified Gluten-Free by the Gluten-Free Certification Organization, and certified Low Glycemic for Diabetics by the Glycemic Research Institute.

The 5 Point Cafe is a bar and 24-hour cafe and bar in the Belltown neighborhood of Seattle, Washington. It is located by Tilikum Place near a five-way intersection. Open since 1929, it is considered the oldest drinking establishment in the neighborhood. It has received accolades from local media for being one of the best dive bars in the city.

Caffè Vita Coffee Roasting Company, commonly known as Caffè Vita, is a coffee roasting company in Seattle, Washington. Part of the third wave of coffee movement, Caffè Vita has been named one of the top ten places "to get the best coffee in America."

Nature's Path Foods, commonly known as Nature's Path, is a privately held, family-owned producer of certified organic foods. Originally known for its breakfast cereals, it now has a portfolio of more than 150 products. Founded in 1985 by Arran and Ratana Stephens, Nature's Path employs approximately 500 people, with manufacturing facilities in Canada and the United States and sales in more than 40 countries. All of its products are vegetarian, certified organic, and Non-GMO Project Verified. Nature's Path is a triple bottom line social enterprise, and has been recognized for incorporating the notion of sustainability into its business practices through its support of various charitable and eco-friendly initiatives. The company is regularly named one of Canada's best employers.

The InSpiral Lounge was a vegetarian restaurant, café and events venue in Camden Lock, Camden, London, England, overlooking the Regent's Canal and Camden Market until its closure in 2016. It was the trading name of Ekopia Ltd.

A Health food restaurant is a restaurant that serves primarily, or exclusively, health foods, which may include vegetarian, vegan, raw, macrobiotic, organic, and low-fat menu options.

Veggie Galaxy is a diner-style vegetarian restaurant located in the Central Square section of Cambridge, Massachusetts.

Maximus/Minimus was a food truck based in Seattle, Washington. It was established by Kurt Beecher Dammeier in June 2009 and the truck was designed by Colin Reedy. Dammeier also owns the truck and enterprise. The truck was built to resemble a pig, and has metallic enhancements that resemble a pig's snout and ears. The truck often parks at 6th Avenue and Pike Street in downtown Seattle, and also purveys at festivals and farmer's markets. Maximus Minimus announced on Facebook in April 2017 that it would not be opening.