Throckley was a colliery village, being adjacent to Throckley Colliery; although with the decline in the coal-mining industry the village has become more urbanised, like many of its kind.

One of Throckley's more notable residents was William Brown, who was a consulting engineer in the 18th century, and part owner of Throckley Colliery at the time, responsible for the construction of many colliery waggonways throughout the North East of England. As a youngster, George Stephenson worked on Dewley farm which lies to the north of the A69.

Throckley has neighbouring villages like Newburn, Walbottle, Blucher, and across the border in Northumberland, Heddon-on-the-Wall. The village is expanding with many new housing estates popping up since the mid 2000s

Throckley also offers a supermarket, car shop, a range of hair salons, social clubs, three care homes for the elderly, two churches, a solarium, funeral parlour, working men's club, an optometrist, medical surgery, a range of newsagents, a chemist, a Masonic hall, [1] and one school (Throckley Primary School). Throckley's economy is also boosted by the presence of an industrial estate which is home to Throckley Brickworks and Warmseal Windows, two of its many businesses.

Throckley itself, especially the Bank Top area, offers some views over the Tyne Valley, and looking west, to the distant Pennines. The Guardian featured Throckley in the top fifty walks guide for 2007.

Throckley Dene is a stretch of semi-natural ancient woodland in a steep-sided valley with Dewley Burn running through. 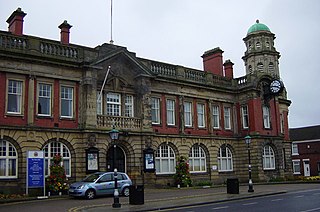 Wallsend is a town in North Tyneside, England, at the eastern end of Hadrian's Wall. It has a population of 43,842 and lies 3.5 miles east of Newcastle upon Tyne.

Cramlington is a town and civil parish in Northumberland, England, 6 miles north of Newcastle upon Tyne, and 10 miles north of its city centre. The name suggests a probable founding by the Danes or Anglo-Saxons. The population was 29,405 as of 2011 census data from Northumberland County Council. It sits on the border between Northumberland and North Tyneside with the traffic interchange at Moor Farm, Annitsford, linking the two areas.

Haltwhistle is a market town and civil parish in Northumberland, England, ten miles east of Brampton. It had a population of 3,811 at the 2011 Census.

Blaydon is a town in the Metropolitan Borough of Gateshead, Tyne and Wear, England, and historically in County Durham. Blaydon, and neighbouring Winlaton, which Blaydon is now contiguous with, form the postal town of Blaydon-on-Tyne. The Blaydon/Winlaton resident population in 2011 was 13,896. 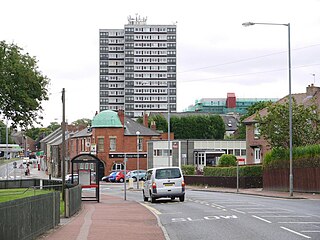 Wideopen, also occasionally spelled Wide Open, is a village in the North Tyneside metropolitan borough of Tyne and Wear, England, around 5 miles (8.0 km) north of Newcastle.

Backworth is a village in the metropolitan borough of North Tyneside in the county of Tyne and Wear, England, about 3+1⁄2 miles (6 km) west of Whitley Bay on the north east coast. It lies 5 miles (8 km) northeast of Newcastle. Other nearby towns include North Shields to the southeast, Wallsend to the south, and Cramlington to the northwest.

Mickley is a cluster of small settlements and former civil parish, now in the parish of Prudhoe, in the Tyne Valley, between Prudhoe and Stocksfield in the English county of Northumberland, England. It lies south of the River Tyne and is accessible via the A695. The electoral ward of Mickley comprises the hamlets of Mickley Square, West Mickley, High Mickley, plus Cherryburn and Eltringham Farm. The population is a little under one thousand. In 1951 the parish had a population of 1862. 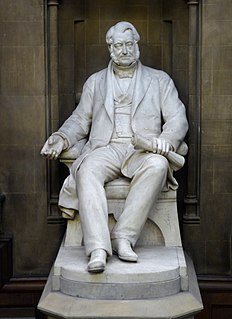 Nicholas Wood FGS FRS was an English colliery and steam locomotive engineer. He helped engineer and design many steps forward in both engineering and mining safety, and helped bring about the North of England Institute of Mining and Mechanical Engineers, holding the position of President from its inauguration to his death.

Wikimedia Commons has media related to Throckley .
This page is based on this Wikipedia article
Text is available under the CC BY-SA 4.0 license; additional terms may apply.
Images, videos and audio are available under their respective licenses.