Throne of Elves (Chinese :精灵王座), also known as Dragon's Nest 2: Throne of Elves, is a 2016 Chinese animated adventure romance film directed by Song Yuefeng. [1] [2] It was released in China by Beijing Enlight Pictures on August 19, 2016, in 2D and 3D. It is the sequel to the 2014 animated film Dragon Nest: Warriors' Dawn based on the video game Dragon Nest . [1]

It is the wedding day of the Elf Queen Mayre, and Princess Liya (Ashley Boettcher) is excited to invite Little Fish (Ryan Potter). The queen allows Liya's request, though Liya's brother, the elf king to-be, disapproves. Meanwhile, at the site of an ancient battleground where the spirits of the many slain elves lurk, Meyla, a dark elf, tries to control the power of the Dark Stone of Death. Meyla, who is the sister of Queen Mayre, resurrects the spirits of the battlefield as her soldiers and gatecrashes the wedding ceremony.

There, a quick fight takes place between the elves and Meyla, but the elves are unable to defeat her. Meyla attacks Mayre and asks for the Green Gem of Life. The queen was supposed to wear it on her wedding day, but Mayre foresaw the danger and gave it to Liya to hide and protect it. As Meyla fights with the queen for the gem, Little Fish fires an arrow with the bow gifted to him by Princess Liya. The arrow injures Meyla's hand. The angered Meyla corrupts the arrow with the magic of the Dark Gem and shoots back towards Little Fish, wounding him. As the magic of the Dark Gem enters his body, it begins corrupting Little Fish.

Meyla is unable to find the Green Gem so she kidnaps Queen Mayre and demands it and a valuable elvish map as ransom in exchange for Queen Mayre. Little Fish and his friends assist Princess Liya and the elves in rescuing the queen and defeating the evil Meyla.

The film has grossed CN¥23.4 million at the Chinese box office. [1]

In many works of modern fantasy, elves are depicted as a race or species of pointy-eared humanoid beings. These depictions arise from the álfar of Norse mythology influencing elves in fantasy as being semi-divine and of human stature, whose key traits are being friendly with nature and animals. However, this differs from Norse and the traditional elves found in Middle Ages folklore and Victorian era literature.

Tanis Half-Elven is a fictional half-elven character in the Dragonlance series of books, which were published by TSR, and are now published by Wizards of the Coast. He is first introduced in the book Dragons of Autumn Twilight by Margaret Weis and Tracy Hickman, in Chapter 1: "Old Friends Meet. A Rude Interruption." They introduce him saying that he was half-elven, armed with a longbow and a sword and wearing leather armor.

Elves, a word from Germanic mythology, are frequently featured in fantasy fiction. In modern fiction, particularly because of the influence from J. R. R. Tolkien's The Lord of the Rings, elves are modeled mostly after his original description: tall, human-like creatures of otherworldly beauty, with Kings and Queens. Along with this development, Dark elves are often modeled as a more sinister counterpart to the High elves, like the Drow or the Trow, which are the fairy-like dark creatures of Orcadian and Shetland folklore. The dark elves (Dökkálfar) or black elves (Svartálfar) are presented in Germanic mythology as dwarves and gray ones.

Chen Sicheng is a Chinese actor, director and screenwriter. He graduated from the Central Academy of Drama, and is known for his leading roles in the films A Young Prisoner's Revenge and Spring Fever; as well as television series Soldiers Sortie. As a director, Chen is known for the hit television series Beijing Love Story and its film sequel; as well as the blockbuster comedy film series Detective Chinatown.

Dragon is a 2006 action/fantasy film created by the independent film group The Asylum.

Mili Pictures Worldwide is a feature film animation company based in Shanghai, China. The company's first film, Dragon Nest: Warriors' Dawn, based on the online game Dragon Nest, was released in China in July 2014. The company opened an office in Los Angeles, California in spring 2014, headed by producer Bill Borden. The company's next feature project, Ping Pong Rabbit, is currently in pre-production in Los Angeles. Ping Pong Rabbit is being directed by Mike Johnson, who was nominated for the 2005 Academy Award for Best Animated Feature as co-director of Corpse Bride.

Dragon Nest: Warriors' Dawn is a 2014 Chinese animated fantasy-romance-adventure film directed by Soong Yuefeng and based on the Dragon Nest video game.

Lego Elves is a toy line and its accompanying media franchise, created by Danish company Lego or The Lego Group, that began in 2015. It is part of the company's effort to make the brand more appealing to girls. Afterwards, it began to become a web-show webisode series in 2015, with a special sort-of-"short-movie" titled "Unite the Magic" on the LEGO YouTube channel, and on Netflix. 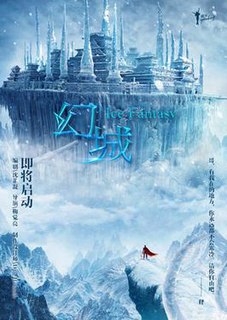 Wang Jun Yi is a contemporary Chinese jade sculptor and carving master who was awarded the title of “Chinese Jade Carving Master” in 2006. He is known for incorporating gold, silver and titanium alloy into jade. 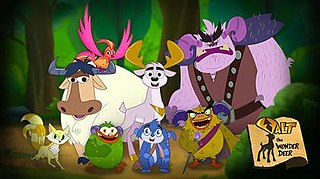 Valt the Wonder Deer is a Chinese–American animated television series that was released to Tencent Video in China on December 31, 2016. The series is produced by DreamEast Pictures and is distributed worldwide by Jetpack Distribution.