According to the United States Census Bureau, the borough has a total area of 5.0 square miles (13 km2), all of it land. It is bordered to the northeast by Olyphant, to the north by Blakely, to the northwest by Dickson City, to the west by Scranton, and to the south by Dunmore.

On April 7, 1911, a fire at the Price-Pancoast Colliery killed 72 coal miners in what has been described as "the most appalling mine disaster in the history of the northern anthracite coal fields." [5]

The borough contains a lead-contaminated parcel of land commonly known as the Marjol Battery site. Now owned by Gould Electronics, the empty land was a former battery processing facility closed in April 1982. Since the late 1980s, the federal United States Environmental Protection Agency and the state DEP have worked to clean up contamination in adjacent areas, but a final remedy for the site itself has remained on hold in recent years, as local officials and citizens fight with the government agencies and Gould over the best solution. In the meantime, the landowner has maintained a policy of basic containment and monitoring.

Throop's most popular summertime event is its annual Cow Flop, organized by the Throop Booster Club. It has been a tradition in Throop since the late 1980s. The Flop serves as a fundraiser for the club and usually raises about $10,000 annually to benefit youth baseball and softball programs in the borough. The Flop, formerly held on a Sunday in late June, is now a two-day (since 2007) event that features a parade, fireworks, music, food, and other entertainment. The event requires more than 100 volunteers, mostly members of the Booster Club and parents of throop athletes, to produce. The main event of the Cow Flop is the raffle involving 2,000 squares and a cow's pick as to where she will relieve herself. Raffle tickets are $10 and the winner of the annual Flop raffle wins $5,000. [6]

In 1987, the Keystone Sanitary Landfill in Dunmore, the largest landfill in the state of Pennsylvania, [11] reached capacity and was extended to Throop. [12]

In 2015, borough officials are embroiled in a protracted dispute with a Pennsylvania journal over open records request. Questions have arisen over the borough council employing relatives and refusing to release public records related to hirings and salaries. [17]

In the Throop area, Interstate 81 is the main highway. Interstate 84, Interstate 380, and U.S. Route 6 meet I-81 at the Throop Dunmore Interchange in Dunmore near Throop. State Route 347 is another major highway in Throop. 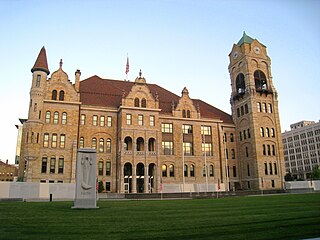 Lackawanna County is a county in the U.S. state of Pennsylvania. As of the 2010 census, the population was 214,437. Its county seat and largest city is Scranton.

Archbald is a borough in Lackawanna County, Pennsylvania, United States. It is named for James Archbald, the first mayor of Carbondale, Pennsylvania. Before being renamed in Archbald's honor, the name of the settlement was White Oak Run. Most of the original settlers were Irish Catholics, fleeing the Great Famine. The population was 6,984 at the 2010 census. 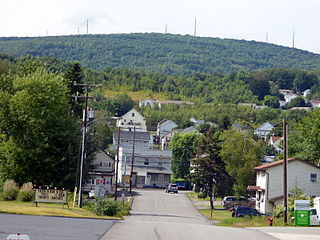 Dickson City is a borough in Lackawanna County, Pennsylvania, 4 miles (6 km) north of Scranton. Coal mining was an important industry in the past. The borough's population peaked at 12,395 in 1930 and was 6,070 at the 2010 census. 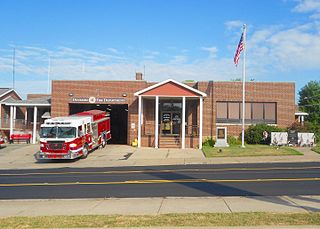 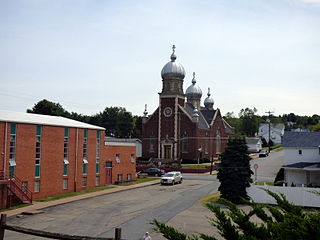 Jermyn, known as "The Birthplace of First Aid in America", is a borough in Lackawanna County, Pennsylvania, on the Lackawanna River, 12 miles (19 km) northeast of Scranton. A productive anthracite coal field was in the region in 1900 when 2,567 people lived here. In 1910, 3,158 residents of Jermyn were tallied. In the early years of the twentieth century, coal mines, cut-glass works, silk, powder, grist, planing, and saw mills, bottling works, and fertilizer factories dotted the borough. The population was 2,169 at the 2010 census. Jermyn is the mailing address of the Lakeland School District. East Jermyn, the section of town east of the Lackawanna River and west of the small section of Archbald known as "Nebraska", is commonly referred to as "Calico Lane" or "The Lane". Jermyn was incorporated as a borough in 1870 and celebrated its centennial in 1970 with a week-long celebration. 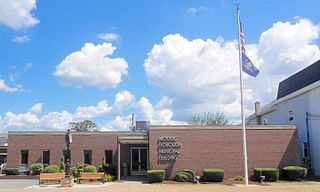 Moosic is a borough in Lackawanna County, Pennsylvania, 6 miles (10 km) south of downtown Scranton and 13 miles (21 km) northeast of downtown Wilkes-Barre, on the Lackawanna River.

Olyphant is a borough in Lackawanna County, Pennsylvania, United States. It is 6 miles (10 km) northeast of downtown Scranton, on the Lackawanna River in the heart of the anthracite region of the state. Its main source of employment was the mining and shipping of coal. Other industries of the past were the manufacturing of blasting powder, iron and steel goods, cigars, and silks. Olyphant experienced a severe downturn in the 1950s. There was once a thriving garment industry with numerous dress factories in the downtown area. There was also a slaughterhouse. Until recently, the biggest industry was the manufacture of compact discs (CD) and digital video discs (DVD). The population was 5,151 at the 2010 census. 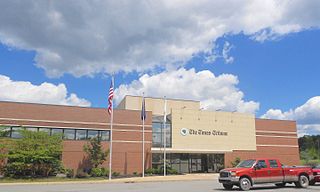 Scott Township is a township in the north central area of Lackawanna County, Pennsylvania, United States. As of the 2010 census, it had a population of 4,905. 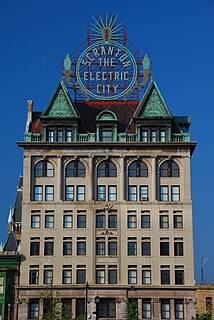 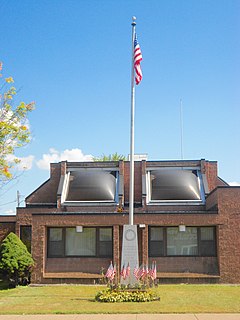 Taylor is a borough in Lackawanna County, Pennsylvania, United States, 3 miles (5 km) southwest of Scranton on the Lackawanna River. It was founded in 1790 by Cornelius Atherton. Silk manufacturing and coal mining were once practiced in the borough. Most of Taylor is built over abandoned mines. The Pennsylvania Turnpike Northeast Extension (I-476), available via the Keyser Avenue Interchange, passes through Taylor, going north to Clarks Summit and south to Philadelphia. 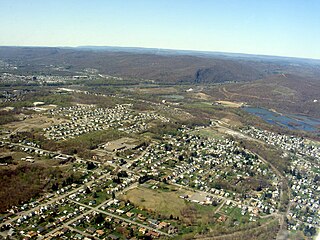 Duryea is a borough in the Greater Pittston area of Luzerne County, Pennsylvania, United States, 9 miles (14 km) south of Scranton. It is situated along the eastern bank of the Susquehanna. The Lackawanna River runs through the heart of Duryea's boundary. It was incorporated as a borough in 1901, and had an import switching rail yard, the Duryea yard, connecting the central Wyoming Valley to destinations in lower New York and down-state Pennsylvania. Coal mining and the manufacturing of silk were the chief industries in the early years of its existence. The population was 4,917 at the 2010 census. 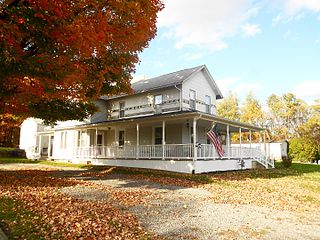 Exeter is a borough in the Greater Pittston-Wilkes-Barre area of Luzerne County, Pennsylvania, United States, about 10 miles (16 km) west of Scranton and a few miles north of Wilkes-Barre. It is located on the western bank of the Susquehanna River and has a total area of 5.0 square miles (12.9 km2). As of 2010, Exeter had a population of 5,652. 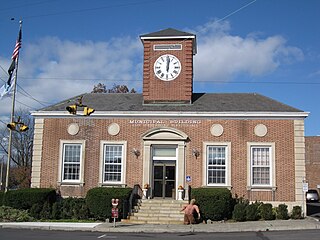 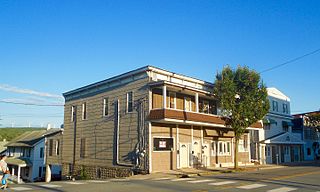 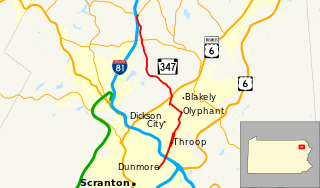 Pennsylvania Route 347 is a 11-mile-long (18 km) state highway located in Lackawanna County, Pennsylvania. The southern terminus is at State Route 6011 at Green Ridge Street in Dunmore. The northern terminus is at PA 524 in Scott Township. The route runs through suburban areas to the northeast of Scranton, serving Dunmore, Throop, Olyphant, and Blakely. From here, PA 347 heads north through rural areas of farms and woods to its northern terminus. The route has interchanges with Interstate 81 (I-81)/U.S. Route 6 in Dunmore and US 6 Business in Blakely and an intersection with PA 632 in Scott Township.

The Mid Valley Region refers to the towns of Dickson City, Olyphant, Throop, and Blakely in Lackawanna County, Pennsylvania. The area was once known for anthracite coal mining and is considered a smaller section of the Coal Region of PA. 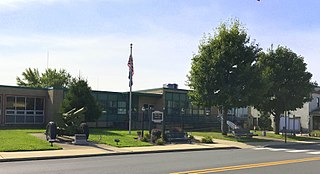 Old Forge is a borough in Lackawanna County, Pennsylvania, United States. The population was 8,313 at the 2010 census. It is located 5 miles (8 km) southwest of downtown Scranton and 12 miles (19 km) northeast of Wilkes-Barre.

Little Roaring Brook is a tributary of Roaring Brook in Lackawanna County, Pennsylvania, in the United States. It is approximately 3.4 miles (5.5 km) long and flows through Olyphant, Throop, and Dunmore. The watershed of the stream has an area of 3.06 square miles (7.9 km2). It contains several watersheds: Dunmore Reservoir Number One, Marshwood Reservoir, and Dunmore Reservoir Number Three. Some strip mining has been done in the stream's vicinity and it has a high load of sediment. The surficial geology in the stream's vicinity consists of Wisconsinan Till, surface mining land, bedrock, urban land, and wetlands.

Eddy Creek is a tributary of the Lackawanna River in Lackawanna County, Pennsylvania, in the United States. It is approximately 5.7 miles (9.2 km) long and flows through Olyphant and Throop. The watershed of the creek has an area of 7.53 square miles (19.5 km2). The creek experiences serious flow loss and is considered to be impaired. It has a natural channel in some reaches, but its channel disappears in other reaches. Rock formations in the creek's vicinity include the Catskill Formation and the Llewellyn Formation. The creek is a second-order stream.