Throssel Hole Buddhist Abbey is a Buddhist monastery and retreat centre located in Northumberland, in northern England. The monastic order is equally for men and women. It follows the Serene Reflection Meditation Tradition, similar to the Sōtō Zen sect in Japan. It is part of the Order of Buddhist Contemplatives. Throssel Hole was established in 1972. It offers retreats, festivals and other events for anyone who wishes to learn about or deepen their practice of meditation.

The Triratna Buddhist Community is an international fellowship of Buddhists, and others who aspire to its path of mindfulness. It was founded by Sangharakshita in the UK in 1967, and describes itself as "an international network dedicated to communicating Buddhist truths in ways appropriate to the modern world". In keeping with Buddhist traditions, it also pays attention to contemporary ideas, particularly drawn from Western philosophy, psychotherapy, and art.

Ānāpānasati, meaning "mindfulness of breathing", paying attention to the breath. It is a quintessential form of Buddhist meditation, attributed to Gautama Buddha, and described in several suttas, most notably the Ānāpānasati Sutta. 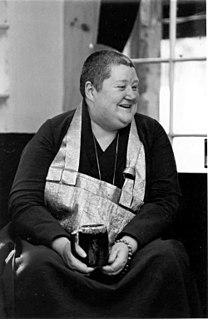 Hōun Jiyu-Kennett, born Peggy Teresa Nancy Kennett, was a British roshi most famous for having been the first female to be sanctioned by the Sōtō School of Japan to teach in the West. 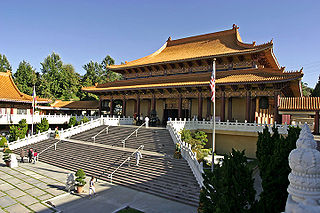 The term American Buddhism can be used to describe all Buddhist groups within the United States, including Asian-American Buddhists born into the faith, who comprise the largest percentage of Buddhists in the country.

The Vipassanā movement, also called the Insight Meditation Movement and American vipassana movement, refers to a branch of modern Burmese Theravāda Buddhism which promotes "bare insight" (sukha-vipassana) to attain stream entry and preserve the Buddhist teachings, which gained widespread popularity since the 1950s, and to its western derivatives which have been popularised since the 1970s, giving rise to the more dhyana-oriented mindfulness movement. 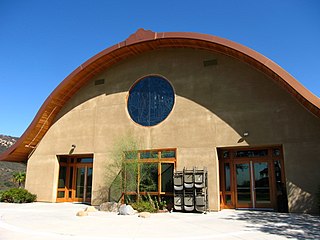 Deer Park Monastery is a 400-acre (1.6 km2) Buddhist monastery in Escondido, California. It was founded in July 2000 by Thích Nhất Hạnh along with monastic and lay practitioners from the Plum Village Tradition. The monastery is under the direct guidance of Thich Nhat Hanh and his Order of Interbeing in the Vietnamese Zen tradition. 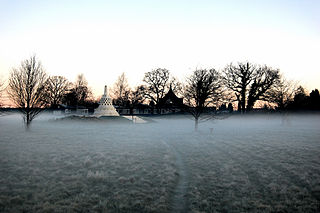 Amaravati is a Theravada Buddhist monastery at the eastern end of the Chiltern Hills in South East England. Established in 1984 by Ajahn Sumedho as an extension of Chithurst Buddhist Monastery, the monastery has its roots in the Thai Forest Tradition. It takes inspiration from the teachings of the community's founder, the late Ajahn Chah. Its chief priorities are the training and support of a resident monastic community, and the facilitation for monastic and lay people alike of the practice of the Buddha's teachings. 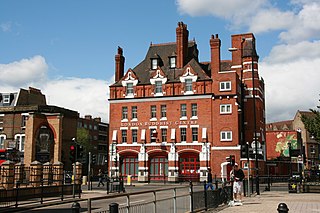 The London Buddhist Centre (LBC) is a temple in Bethnal Green in East London, is the main base for the London Triratna Buddhist Community, formerly known as the Friends of the Western Buddhist Order. It opened in 1978, and is located in an ornate, vernacular redbrick Victorian fire station, completed in 1888, and in use by the London fire service until 1969. The building was fire-damaged in the 1970s, before being renovated by volunteers for its current use. Further major improvements were completed in 2009.

Shasta Abbey, located on sixteen forested acres near Mount Shasta in northern California, United States is a training monastery for Buddhist monks and a place of practice for lay Buddhists and interested visitors. It was established in 1970 by Reverend Master P.T.N.H. Jiyu-Kennett, who was Abbess and spiritual director until her death in 1996.

Nan Hua Temple is the largest Buddhist temple and seminary in Africa, and is situated in the Cultura Park suburb of Bronkhorstspruit, South Africa. It is the African headquarters of the Fo Guang Shan Order, covering over 600 acres (2.4 km2). Fo Guang Shan was established in 1967 by Venerable Master Hsing Yun, and is a Mahayana Chinese Buddhism monastic order. The Temple, like its mother order in Taiwan, follows the Linji Chan school of Buddhism as well as the Pure Land School.

Joseph Goldstein is one of the first American vipassana teachers, co-founder of the Insight Meditation Society (IMS) with Jack Kornfield and Sharon Salzberg, a contemporary author of numerous popular books on Buddhism, a resident guiding teacher at IMS, and a leader of retreats worldwide on insight (vipassana) and lovingkindness (metta) meditation. 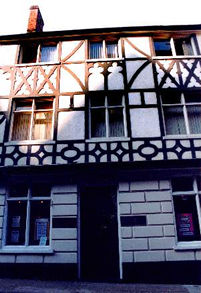 The Norwich Buddhist Centre (UK) was established in Norwich, Norfolk, England in 1976. The centre is run by people associated with a Buddhist organisation called the Triratna Buddhist Community, previously the Friends of the Western Buddhist Order, founded by Sangharakshita in 1968.

Thubten Chodron, born Cheryl Greene, is an American Tibetan Buddhist nun, author, teacher, and the founder and abbess of Sravasti Abbey, the only Tibetan Buddhist training monastery for Western nuns and monks in the United States. Chodron is a central figure in the reinstatement of the Bhikshuni ordination of women. She is a student of the 14th Dalai Lama, Tsenzhab Serkong Rinpoche, Lama Thubten Yeshe, Thubten Zopa Rinpoche, and other Tibetan masters. She has published many books on Buddhist philosophy and meditation, and is co-authoring with the Dalai Lama a multi-volume series of teachings on the Buddhist path, The Library of Wisdom and Compassion.

Sravasti Abbey, the first Tibetan Buddhist monastery for Western nuns and monks in the U.S., was established in Washington State by Bhikshuni Thubten Chodron in 2003. Whilst practicing in the Tibetan Buddhist Tradition, Sravasti Abbey monastics ordain in the Dharmaguptaka Vinaya. It is situated on 300 acres (1.2 km2) of forest and meadows, 11 miles (18 km) outside of Newport, Washington, near the Idaho state line. It is open to visitors who want to learn about community life in a Tibetan Buddhist monastic setting.

Buddhism in the United Kingdom has a small but growing number of adherents which, according to a Buddhist organisation, is mainly a result of conversion. In the UK census for 2011, there were about 247,743 people who registered their religion as Buddhism, and about 174,000 who cited religions other than Christianity, Buddhism, Hinduism, Judaism, Islam, Jainism and Sikhism. This latter figure is likely to include some people who follow the traditional Chinese folk religion which also includes some elements of Buddhism. 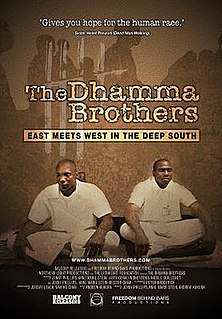 The Dhamma Brothers is a documentary film released in 2007 about a prison meditation program at Donaldson Correctional Facility near Bessemer, Alabama. The film features four inmates, all convicted of murder, and includes interviews with guards, prison officials, local residents and other inmates, and reenactments of their crimes. The soundtrack includes music by Low, New Order and Sigur Rós.

Buddhism now has more growing support in England. 238,626 people in England declared themselves to be Buddhist at the 2011 Census and 34% of them lived in London.

Birken Forest Buddhist Monastery, or Sītavana, is a Theravada Buddhist monastery in the Thai Forest Tradition near Kamloops, British Columbia. It serves as a training centre for monastics and also a retreat facility for laypeople. Its abbot is Venerable Ajahn Soṇa. 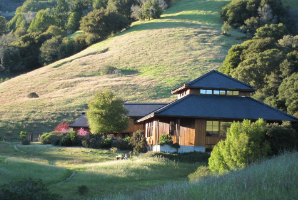 Spirit Rock Meditation Center, commonly called Spirit Rock, is a meditation center in Woodacre, California. It focuses on the teachings of the Buddha as presented in the vipassana, or Insight Meditation, tradition. It was founded in 1985 as Insight Meditation West, and is visited by an estimated 40,000 people a year. The San Francisco Chronicle has called it one of "the Bay Area's best-known centers for Buddhist meditation."

Norwich Zen Buddhist Priory is a place of meditation and practice for the Sōtō Zen tradition of Buddhism. It is located in west Norwich, England. A senior monk in the Order of Buddhist Contemplatives, Reverend Leoma Hague, is resident there.