Through My Eyes (Fabrizio Sotti album)

Through My Eyes is an album by guitarist Fabrizio Sotti that was released in 2004.

Through My Eyes was recorded and mixed at Condulmer Studios, Italy and Smythe Studios, New York City in July and November 2002, and was engineered by Giorgio Piovan and Stephane Guyot. It was released on Sotti's own Sotti Entertainment label two years later. Dennis D'Amico is credited as a co-producer on the album. [1]

All tracks written by Fabrizio Sotti 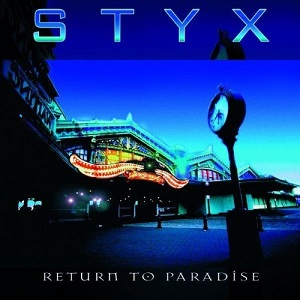 Return to Paradise is a live album by Styx, released in 1997. It features songs from their successful reunion tour with Tommy Shaw, but without John Panozzo, who died in July 1996. It includes three new studio tracks, including "Dear John", which Shaw wrote as a tribute to Panozzo. 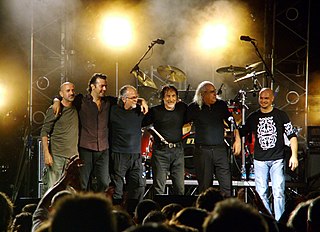 Premiata Forneria Marconi (PFM) is an Italian progressive rock band founded in 1970 and which continues to the present day. They were the first Italian group to have success internationally. The group recorded five albums with English lyrics between 1973 and 1977. During this period they entered both the British and American charts. They also had several successful European and American tours, playing at the popular Reading Festival in England and on a very popular national television program in the United States.

Lost and Found: You've Got To Earn It (1962–1968) is a compilation album by The Temptations. Released by Motown Records in 1999, it includes twenty unreleased Temptations records alongside unreleased mixes of "Ain't Too Proud to Beg" and "You've Got to Earn It". Most of the songs were recorded during the group's "Classic 5" era with David Ruffin and Eddie Kendricks as lead singers, although there are some tracks present which were recorded with Ruffin's predecessor, Elbridge Bryant, in the lineup. There's also one track that was recorded with Ruffin's successor, Dennis Edwards.

Glamoured is a studio album by American jazz singer Cassandra Wilson. The record was released on the Blue Note label in 2003. 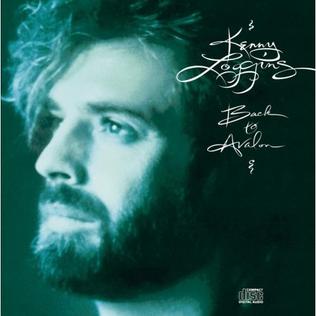 Back to Avalon is the sixth solo album from soft rock singer Kenny Loggins. Released in 1988, it yielded the hit singles "Nobody's Fool ", "I'm Gonna Miss You," "Tell Her," and "Meet Me Halfway", a ballad which had already been a Top 40 hit the previous year through the movie Over the Top.

3D is a studio album by vocal trio The Three Degrees released in late 1979. The album, which was produced by Giorgio Moroder and Harold Faltermeyer, yielded two successful single releases, "Jump The Gun" and "My Simple Heart".,"Without You" and "Starlight" were also released as singles, but failed to make any impact on the singles chart. In the US "Set Me Free" was released and was a hit in the clubs and US Disco Charts. The album peaked at #61 in the UK album charts.

Colour All My Days is the second solo album by the English singer Limahl, released on EMI Records in 1986.

Fabulous is the 15th album by Scottish singer Sheena Easton, released in November 2000. The album charted in the UK at #185 and contains Euro Hi-NRG cover versions of hit songs from the 1970s and '80s, most of them disco classics. The album also contains two original compositions. The first single released from the album was a remake of "Giving Up Giving In", which had originally been a hit for the Three Degrees in 1978. Easton's version was less successful, peaking at #54 on the UK Singles Chart. 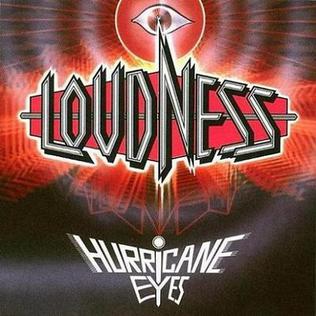 Hurricane Eyes is the seventh studio album by Japanese heavy metal band Loudness. It was released in 1987 worldwide with standard English lyrics. A "Japanese Version" was subsequently released only in Japan later in the year with Niihara singing most of the lyrics in Japanese. The album was produced by the famous producer and sound engineer Eddie Kramer, who had worked with the likes of The Rolling Stones, Led Zeppelin, Jimi Hendrix and Kiss. The song "So Lonely", a reprise of "Ares Lament" from the album Disillusion of 1984, was instead produced by Andy Johns, another world-famous producer. This was the last Loudness' album to enter the US Billboard 200 chart, where it remained for 4 weeks, peaking at No. 190.

Fabrizio Sotti is a guitarist, composer, producer and songwriter. In addition to jazz, Sotti plays in the styles of bebop, jazz fusion, soul, hip hop, R&B and pop. He has worked with many artists.

Another Country is a studio album by singer Cassandra Wilson, featuring the guitar, songwriting and production of Italian guitarist and producer Fabrizio Sotti. The record was released on June 20, 2012 via eOne Records label.

Inner Dance is a 2010 solo album written and produced by Italian jazz guitarist Fabrizio Sotti. The album was recorded at both Avatar Studios and Sotti Studios in New York City in February and April 2009. 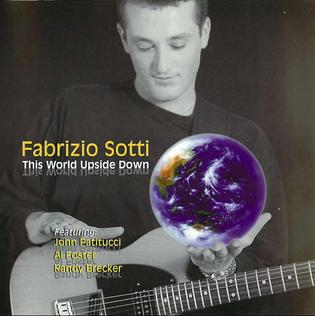 This World Upside Down is the American debut album by Italian jazz guitarist Fabrizio Sotti.

Through My Eyes may refer to:

De André canta De André - Cristiano De André Live ["DeA sings DeA"] is a live tribute album by Cristiano De André, consisting of updated covers and remakes of songs written and originally performed by his late father Fabrizio De André, recorded during Cristiano's 2009-2010 tour of Italy and released as a CD+DVD bundle. Similarly to De André Senior's 1979-1980 release In Concerto - Arrangiamenti PFM, it was followed by a Volume 2 in 2010, recorded during the same shows and released in the same 2-disc format.