Through the Mist (French : Dédé, à travers les brumes) is a Canadian drama film, directed by Jean-Philippe Duval and released in 2009. [1] A biopic of rock musician Dédé Fortin of Les Colocs, the film stars Sébastien Ricard as Fortin.

André "Dédé" Fortin was a founding member, frontman, and vocalist of the Québécois band Les Colocs, formed in 1990.

The Prix Iris is a Canadian film award, presented annually by Québec Cinéma, which recognizes talent and achievement in the mainly francophone feature film industry in Quebec. Until 2016, it was known as the Jutra Award in memory of influential Quebec film director Claude Jutra, but Jutra's name was withdrawn from the awards following the publication of Yves Lever's biography of Jutra, which alleged that he had sexually abused children. It should not be confused with the Claude Jutra Award, a special award presented by the Academy of Canadian Cinema & Television as part of the separate Canadian Screen Awards program which was also renamed in 2016 following the allegations against Jutra. 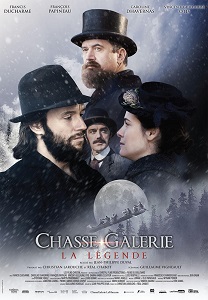 Wild Run: The Legend is a 2016 Canadian fantasy film directed by Jean-Philippe Duval and starring Caroline Dhavernas, Francis Ducharme and François Papineau. The film's screenplay is written by Guillaume Vigneault, based on the French Canadian legend of Chasse-galerie.

Robin Aubert is a Canadian actor, screenwriter and film director. He is most noted for his performance in the film The Countess of Baton Rouge , for which he received a Genie Award nomination for Best Actor at the 18th Genie Awards in 1997, and his 2017 film Ravenous , which won the Toronto International Film Festival Award for Best Canadian Film at the 2017 Toronto International Film Festival.

3 Indian Tales is a Canadian docufiction film, directed by Robert Morin and released in 2014.

The Prix Iris for Best Live Action Short Film is an annual film award presented by Québec Cinéma as part of its Prix Iris program, to honour the year's best short film made within the cinema of Quebec.

The Timekeeper is a Canadian drama film, directed by Louis Bélanger and released in 2009. Adapted from the novel of the same name by Trevor Ferguson, the film stars Craig Olejnik as Martin Bishop, a young man who takes a job on a railway construction crew in the Northwest Territories, but struggles under the harsh cruelty of crew foreman Fisk. The cast also includes Roy Dupuis, Gary Farmer, Julian Richings and Wayne Robson.

The Prix Iris for Most Successful Film Outside Quebec is an annual film award presented by Québec Cinéma as part of the Prix Iris awards program, to honour films made within the Cinema of Quebec which have had significant success beyond the province, both in English Canada and internationally.