In martial arts, a throw is a grappling technique that involves off-balancing or lifting an opponent, and throwing them to the ground, in Japanese martial arts referred to as nage-waza, 投げ技, "throwing technique". Throws usually involve a rotating motion, the practitioner performing the throw disconnects with the opponent, and ends balanced and on their feet as opposed to a takedown where both finish on the ground. Throws can however also be followed into a top position, in which case the person executing the throw does not disengage from the opponent. Certain throwing techniques called sacrifice throws (sutemi-waza, 捨身技, "sacrifice technique") involve putting oneself in a potentially disadvantageous position, such as on the ground, in order to execute a throw.

There are several major types of throw, among Asian martial arts, Judo has the most developed throwing techniques and throws are considered its specialty.

Most throws are named by describing the circumvention point of the throw (e.g., hip throw, shoulder throw, wrist throw etc.), or the nature of effect of the throw on the opponent (e.g., heaven and earth throw, valley drop, body drop) with variations are given descriptive names. The names used here are attributed to Jujutsu throws (and hence judo/Aikido throws) are descriptions in Japanese. It is conventional for the Japanese to name their throws in this manner, and many western martial art dojos have given English names to the throws feeling that it is easier for English speaking students to remember the names of throws if they can associate the throws by the descriptive nature of the throw name.

Shoulder and back throws

A shoulder throw involves throwing an opponent over the shoulder. A shoulder throw which lifts the opponent from the ground is in Japanese referred to as seoi-nage (背負い投げ, "Back Throw"), while a throw which involves upsetting the opponent’s balance and pulling the opponent over the shoulder is referred to as seoi-otoshi (背負落とし, "Back Drop"). [1] Seoi-nage is one of the most used throws in judo competition. One study indicated that approximately 56% of judokas implemented the technique. [2]

A common shoulder throw is judo's ippon seoinage ("Single-Handed Back Throw") [3] or the similar flying mare in wrestling. [4]

In a leg reap, the attacker uses one of their legs to reap one or both of their opponent's legs off the ground. Generally the opponent's weight is placed on the leg that is reaped away. This coupled with the attacker controlling the opponent's body with their hands causes the opponent to fall over. Common leg reaps are judo's Ouchi Gari, Kouchi Gari, Osoto Gari, and Kosoto Gari. There are similar techniques in wrestling, including the inside and outside trips.

Somewhat similar to leg reaps involve a hooking or lifting action with the attacking leg instead of a reaping action. The border between the two types of throw can be unclear, and many throws will exhibit characteristics of both reaps and trips, however, the difference is that a reap is one smooth move, like that of a scythe, whereas a hook is pulling the opponents leg up first, and then swinging it away. Common leg trips are hooking variations of Ouchi Gari and Osoto Gari along with Kosoto Gake, referred to as inside and outside trips in Western wrestling.

A hip throw involves using the thrower's hip as a pivot point, by placing the hip in a lower position than an opponent's center of gravity. There are several types of hip throws such as O Goshi, which is often taught first to novices. Hip throws in Judo are called Koshi Waza, and in Aikido or Sumo they are called koshinage.

Sacrifice throws require the thrower to move into a potentially disadvantageous position in order to be executed, such as falling to the ground. The momentum of the falling body adds power to the throw and requires comparatively little strength, compared to the effect. In Judo (as well as in other martial arts), these throws are called sutemi waza and are further divided into rear (ma sutemi waza) and side (yoko sutemi waza) throws. In Judo, these throws are limited to a specific grade and higher due to the element of danger that is placed upon both the uke (receiver) and the tori (thrower). [5]

Pickups involve lifting the opponent off the ground and then bringing them down again. Common pick-ups are lifting variations of the double leg takedown, Judo's Te Guruma or sukui nage (both classified as hand throws) and the suplex from wrestling, in which the attacker lifts their opponents body vertically and throws the opponent over their own center of gravity while executing a back fall (usually accompanied by a back arch). Variations of the suplex are common in most forms of wrestling and sometimes used in mixed martial arts competition. In Judo, the ura-nage throw is a version of the suplex, but it is classified as a sacrifice throw.

Some of the more common throwing techniques are listed below. This is not an exhaustive list and the techniques may be referred to by other names in different styles. An English translation and a common Japanese equivalent are given. 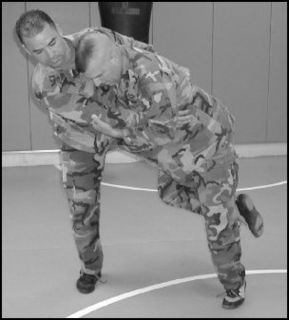 In martial arts and combat sports, a takedown is a technique that involves off-balancing an opponent and bringing him or her to the ground with the attacker landing on top. The process of quickly advancing on an opponent and attempting a takedown is known as shooting for a takedown, or simply shooting. Takedowns are usually distinguished from throws by amplitude and impact, with throws being a subset of takedown. Takedowns are featured in all forms of wrestling and stand-up grappling.

Nage-no-kata is one of the two Randori-no-kata of Kodokan Judo. It is intended as an illustration of the various concepts of nage-waza that exist in judo, and is used both as a training method and as a demonstration of understanding.

Collar-and-elbow wrestling is a style of folk wrestling native to Ireland that can be traced back to the 17th century but it has ties to the Games of Tailtinn between 632 BC and 1169 AD. Though originating in Ireland, the style flourished in America, Australia and Argentina. Collar-and-elbow features an array of trips, mares/throws, hip-locking, shin kicking, pinning combinations, and limited knowledge of submissions.

Seoi nage (背負い投げ) is a shoulder throw, one of the traditional forty throws of Judo as developed by Jigoro Kano. It belongs to the first group, Dai Ikkyo, of the traditional throwing list, Gokyo, of Kodokan Judo. It is also part of the current 67 Throws of Kodokan Judo. It is classified as a hand technique, te-waza, and is the second throw performed in the Nage-no-kata.

The ippon seoi nage is a throw in judo. It is a variant of Seoi nage, and is one of the nineteen accepted techniques in Shinmeisho No Waza of Kodokan Judo. It is classified as a hand throwing technique, or te-waza. 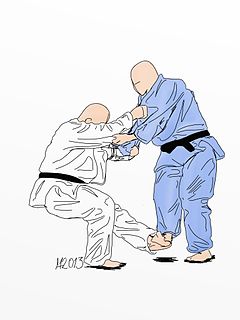 Yoko Gake (横掛) is one of the original forty throws of judo as developed by Jigoro Kano. It belongs to the fifth group, Gokyo, of the traditional throwing list, Gokyo, of Kodokan Judo. It is also part of the current 67 throws of Kodokan Judo. It is classified as a side sacrifice technique, Yoko-sutemi. Considered one of the techniques most dangerous for the Uke, its use in competition is infrequent; contributing to the risk is that Uke does not have sufficient space to dissipate the impact of the fall adequately. Another contributing factor is the necessity for Uke to compensate in order to achieve proper rotation in executing the breakfall; if the Uke does not succeed in meeting these criteria, the force of the impact can be severe, even to the point of possible spinal injury. For these reasons, the technique is generally reserved for expert judoka.

Kosoto Gake (小外掛), sometimes known as "minor outer hook", the English translation, is one of the original 40 throws of Judo as developed by Jigoro Kano. It belongs to the third group, Sankyo, of the traditional throwing list, Gokyo, of Kodokan Judo. It is also part of the current 67 Throws of Kodokan Judo. It is classified as a foot technique, Ashi-waza. It is often used as a counter-throw to tai-otoshi, after having stepped over the leg. To perform the technique, the tori grabs uke using one of several compatible grips - the traditional example being the sleeve collar grip. He then steps forwards diagonally to place all of uke's weight on the foot tori wishes to reap. This leg is reaped by wrapping the leg around his leg from the outside and plucking the ankle or calf upward with the back of tori's own ankle or calf respectively. Because the weight was planted on this foot due to off-balancing uke, tori can make him fall. If uke's weight is not on the leg being swept, uke will remain stable and be able to keep his balance. This should all be done in a fluid motion so that uke's weight is moving backwards whilst the leg is being reaped, otherwise it will be too heavy to lift although the throw can still work sometimes from this position.

Yoko Guruma (横車), is one of the original 40 throws of judo as developed by Jigoro Kano. It belongs to the fifth group, Gokyo, of the traditional throwing list, Gokyo, of Kodokan Judo. It is also part of the current 67 throws of Kodokan Judo. It is classified as a side sacrifice technique, Yoko-sutemi. This technique is considerably difficult to perform, and can be used as either a direct attack or a counter. In classical study of nage-waza, it is preferable to use it as a counter throw to seoi-nage.

Osoto Otoshi (大外落) is one of the preserved throwing techniques, Habukareta Waza, of Judo. It belonged to the fourth group, Yonkyo, of the 1895 Gokyo no Waza lists. It is categorized as a foot technique, Ashi-waza. 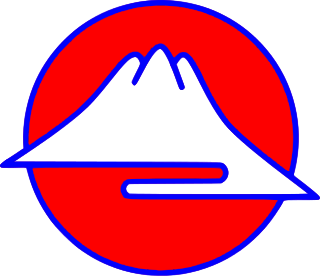 Gonosen-no-kata is a judo kata that focuses on counter-attacks to throwing techniques. It is not an officially recognized kata of judo, but its importance is attested to by its inclusion in Kawaishi's The complete seven katas of judo. Writing in the early post-war period, Kawaishi described the kata as being practiced less in Japan than in Europe.

The Nage-waza ura-no-kata is a judo kata that, like the Gonosen-no-kata, focuses on counter-attacks to throwing techniques. It was developed by Mifune Kyūzō, and is not an officially recognized Kodokan kata.

Naohisa Takato is a Japanese judoka.

An Baul is a South Korean judoka.

Hifumi Abe is a Japanese judoka.