Thrums is a settlement in British Columbia. It is located on the Kootenay River between Castlegar BC and Nelson BC. 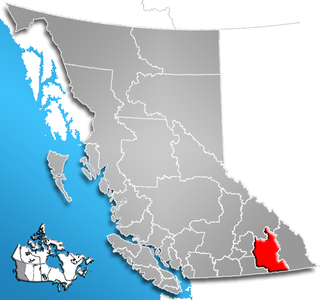 Wigston Fields is a district of the borough of Oadby and Wigston in Leicestershire, England. It is to be found between Leicester and the town of Wigston on the A5199 road. The population is included in the Wigston St. Wolstan's ward of the borough council. 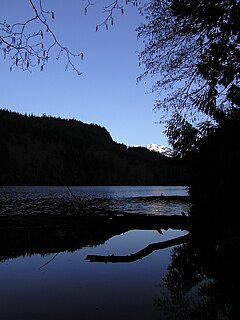 King George VI Provincial Park is a provincial park in British Columbia, Canada. It was established by Order in Council on May 3, 1937, named in commemoration of the coronation of George VI. 162 acres (0.66 km2) in area, the park was originally established to provide a rest area and campground for travellers on BC Hwy 22 entering Canada from the United States, the site's facilities were repeatedly vandalized until they were finally removed by BC Parks and the site left to revert to its natural state. There are no facilities in this park, nor any trails. The park's stands of old-growth Populus trichocarpa shelter it from neighbouring mixed-use areas and serve as habitat for cavity nesting birds, such as barred owls, pileated woodpeckers and red-naped sapsuckers.

Syringa Provincial Park is a provincial park in British Columbia, Canada. It is located west of Castlegar, on the shores of Lower Arrow Lake. The park runs along the edge of the Columbia River with a rocky beach and has amenities for boating, camping, and hiking. 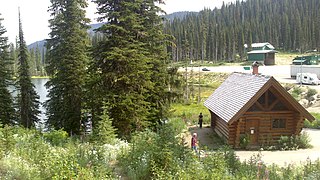 Stagleap Provincial Park is a provincial park in British Columbia, Canada. The park is approximately 1133 hectares. It is 34 kilometers west of Creston.

Tetrahedron Provincial Park is a provincial park in British Columbia, Canada, located northeast of Sechelt in the Sunshine Coast area of the province. The park was created in 1995. Its highest point is Tetrahedron Peak, at 1727 meters. It also contains Panther Peak, and Mt. Steele 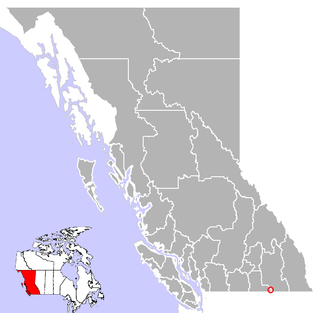 Montrose is a village located in south-eastern British Columbia in the West Kootenay region. It is located 7 km east of the city of Trail along Highway 3B.

Cedar is a small community in the Canadian province of British Columbia. It is located near the east coast of Vancouver Island — about 8 kilometres (5.0 mi) southeast of Nanaimo. Its geographical coordinates are 49°07′N 123°51′W.

KATP is a radio station serving the Amarillo, Texas, metro area with a country music format. It is owned by Townsquare Media. Its studios are located on Southwest 34th Avenue in Southwest Amarillo, and its transmitter tower is based north of the city in unincorporated Potter County.

Youngou is a town in the Zabré Department of Boulgou Province in south-eastern Burkina Faso. As of 2005, the town has a population of 6,343.

Musket Island Marine Provincial Park is a provincial park in British Columbia, Canada, located on the west side of Nelson Island, at the mouth of Jervis Inlet and near Earl's Cove in the Sunshine Coast region.

Modletice is a village and municipality in Prague-East District in the Central Bohemian Region of the Czech Republic. The municipality covers an area of 3.43 square kilometres (1.32 sq mi) and as of 2006 it had a population of 590.

Yale First Nation is a First Nations government located at Yale, British Columbia. Yale has 16 distinct reserves stretching from near Sawmill Creek to American Creek, with the most southern reserve situated at Ruby Creek in the District of Kent.

The Kokanee Range is a subrange of the Selkirk Mountains in the West Kootenay region of southeastern British Columbia, Canada. It is located between the valley of the Slocan River (W) and that of Kootenay Lake (E), and to the north of the Kootenay River and the West Arm of Kootenay Lake. The range includes Kokanee Glacier Provincial Park, Kokanee Peak, and Grays Peak, notable as the mountain featured on the label of Kokanee beer. The name "Kokanee" refers to a land-locked variety of Sockeye salmon.