Thuận Nam is a district (huyện) of Ninh Thuận Province in the Southeast region of Vietnam.

It was established on 10 June 2009 following Resolution 26/NQ-CP of the government of Vietnam on land that was previously part of Ninh Phước District.

Bình Thuận is a province of Vietnam. It is located on the country's South Central Coast. It is sometimes seen as part of the Southeast region. The province is known for its scenery and beaches. There are also a number of sites of archaeological significance. 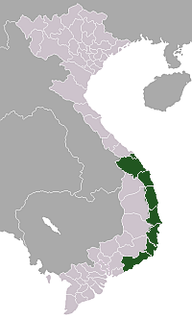 Đông Nam Bộ is a region in Vietnam. This region includes one municipality, Ho Chi Minh City; and five provinces: Đồng Nai, Bình Dương, Bà Rịa–Vũng Tàu Province, Bình Phước and Tây Ninh. The two southern provinces Ninh Thuận and Bình Thuận are sometimes seen as part of the Southeast region. This region is the most economically developed region in Vietnam. In 2006, this region contributed 148,000 billion VND out of 251,000 billion VND to the state budget. This region is also the most highly urbanized in the country with more than 50% people living in urban areas.

Hải Châu is an urban district (quận) of Da Nang in the South Central Coast region of Vietnam. This is the administrative, cultural and commercial center of the city. The city hall, the main theater and main market are located in Hải Châu. Da Nang International Airport is just about 3 kilometres (1.9 mi) away from the district's center. 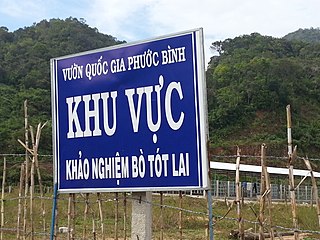 Bác Ái is a district (huyện) of Ninh Thuận Province in southeastern Vietnam.

Ninh Phước is a district (huyện) of Ninh Thuận Province in the Southeast region of Vietnam. It is also known as "Phu Quy". The city is growing at a fairly fast rate compared to other cities in Vietnam. The city has many beaches and resorts that are in the making.

Phước Hòa may refer to several places in Vietnam, including:

Phước Bình National Park is a national park in the commune of Phước Bình, Bác Ái District, Ninh Thuận Province. It is located 62 km north-west from Phan Rang town, the capital of Ninh Thuận Province, on the border with Lâm Đồng and Khánh Hòa provinces. Phước Bình National Park was classified as a nature reserve by Decision 125/2002/QD dated 26 September 2002. On 8 June 2006 it was established as a national park under Decision number 822/QĐ-TTg dated 8 June 2006 by then Vice Prime Minister of Vietnam Nguyễn Tấn Dũng.

Vietnam has been considering to develop nuclear power for peaceful purposes based on modern, verified technology since 1995, and firm proposals surfaced in 2006. However, in November 2016 Vietnam decided to abandon nuclear power plans as they were "not economically viable because of other cheaper sources of power." 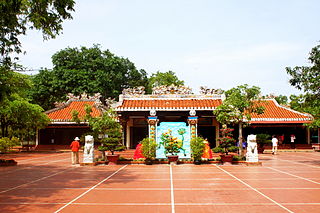 La Gi (pronounced:/la-ji/) is a District-level town of Bình Thuận Province, Vietnam. Under the Republic of Vietnam period, La Gi was the provincial capital of Bình Tuy Province. After the Vietnam War, it became the capital of Hàm Tân District. It was established in 2005 with the split of La Gi away from Hàm Tân District.

Đông Hồ is a village in the Song Hồ commune, in Thuận Thành District, Bắc Ninh Province, Vietnam. It is one of several well known "craft villages", other most notable ones being Non Nước marble village and Cam Ne mat village in Da Nang, the Bát Tràng pottery village and Vạn Phúc silk village near Hanoi, and the Phước Kiều bronze casting village in Quảng Nam Province.

Nguyễn Thị Bích(阮氏碧), also known as Nguyễn Nhược Thị Bích was a Vietnamese poet. She was a literate lady at the Huế court whose experiences in the 1885 flight of Hàm Nghi are recorded in her best known work Hạnh Thục ca, Song of Voyage to Thục.