She has polyarteritis nodosa. [4]

Li Jiawei is a Chinese-born former Singaporean table tennis player, four-time Olympian and twice Olympic medalist. She trained in Beijing's famous Shichahai Sports School with Olympic medalist Zhang Yining. In 1995, she moved to Singapore and in the following year, she commenced her international career as a competitive table tennis player. She became a Singapore citizen at the age of 18 years under the Foreign Sports Talent Scheme.

Wang Nan is a female Chinese table tennis player from Liaoning. Wang remained as world #1 on the ITTF ranking system from January, 1999 to November, 2002. She is left-handed, and began playing table tennis when she was seven years old. Her particular skills are changing the placement of the ball during rallies and her loop drive, as well as her notable speed. Wang has been the leader of the women's table-tennis team of China after Deng Yaping's retirement. In terms of achievements, she is one of the most successful female table tennis players having won the gold medal in each of the Table Tennis World Cup, the Table Tennis World Championships, and the Olympic Games.

Wang Yuegu is a Chinese-born Singaporean table tennis player who was ranked among the top ten players in the world. Wang made her inaugural appearance as a Singaporean table tennis player on the International Table Tennis Federation (ITTF) Pro Tour in June 2005 at the Volkswagen Korean Open in Suncheon, South Korea, where she and Sun Beibei took the silver medal in the women's doubles. On 24 September 2006, Wang achieved her first gold medal on the Pro Tour at the Japan Open in Yokohama. She repeated the feat against her compatriot Li Jiawei on 12 November at the ITTF Pro Tour German Open in Bayreuth. In June 2007, Wang helped Singapore sweep the women's team, women's doubles and mixed doubles gold trophies at the 17th Commonwealth Table Tennis Championships in Jaipur.

Zhang Xiaoling is a Chinese retired para table tennis player who won 12 Paralympic medals from 1988 to 2008. 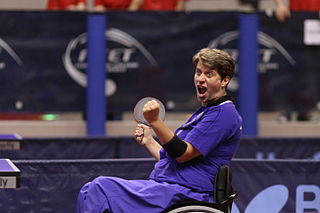 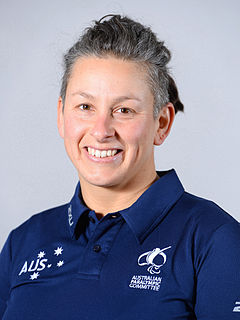 Daniela "Danni" Di Toro is an Australian wheelchair tennis player. Di Toro was the 2010 French Open doubles champion and has also been the Masters double champion. In singles Di Toro is the former world number one and two time masters finalist. In 2015, she moved to para-table tennis and represented Australia at the 2016 Rio Paralympics, where she was team captain with Kurt Fearnley. She has neen selected for the 2020 Tokyo Paralympics, her sixth Paralym;pics and she is team captain with Ryley Batt. 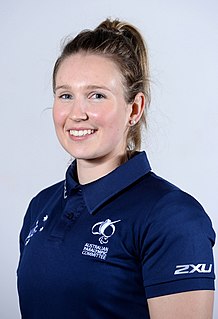 Ng Mui Wui is a para table tennis player from Hong Kong. She won a bronze at the women's Class 11 singles event held at the 2016 Summer Paralympics. 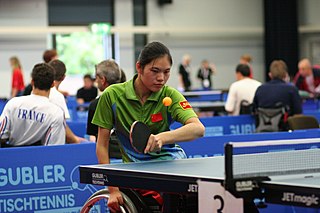 Thailand will be competing at the 2020 Summer Paralympics from 24 August to 5 September 2021. This will be the country's tenth appearance at the Paralympic Games.

Tajudeen Agunbiade is a Nigerian para table tennis player of class 9 and Paralympian.

Tunde Adisa is a Nigerian para table tennis player of class 9 and Paralympian.

France will be competing at the 2020 Summer Paralympics in Tokyo, Japan, from 24 August to 5 September 2021.

Anne Barnéoud is a French para table tennis player who competes in international level events. She is a three time World bronze medalist, double European team champion, she has won multiple medals in team events with Thu Kamkasomphou. She works as a police commissioner.