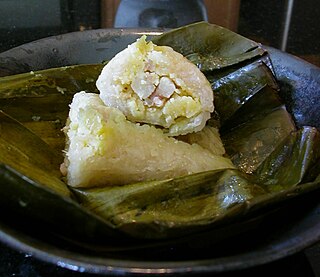 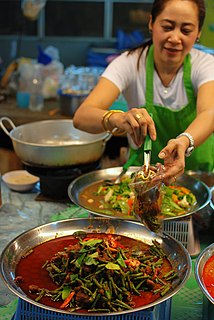 Phat phrik khing or pad prik king is a type of Thai curry that is drier than other Thai curries such as red curry as it is fried in oil and does not contain liquid coconut milk. Sometimes, instead of, or in addition to frying oil, coconut milk is heated until it turns to oil for added taste. 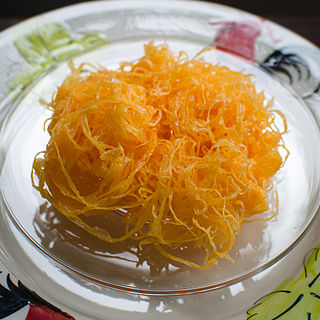 Thapthim krop is one of the most famous Thai desserts, which is made of cubes of water chestnuts in syrup coated with red food coloring. This dessert is known as "pomegranate seeds" or "rubies" because of its appearance. It is usually eaten with coconut milk and ice cubes. 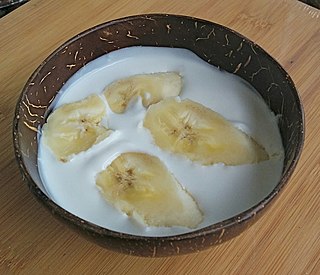 Khao mak, also known as Thai Fermented Sweet Rice Dessert is an ancient Thai dessert for adults, as it has a touch of natural alcohol.

Bua loi or bua loy is a Thai dessert, made with glutinous rice flour, coconut milk and sugar.

Mango sticky rice is a traditional Thai dessert made with glutinous rice, fresh mango and coconut milk, and eaten with a fork, spoon, or sometimes the hands. Although originating in Thailand, it is consumed throughout the Indochina region and the rest of Southeast Asia and South Asia, including Laos, Cambodia, Vietnam, India and Bangladesh. Mango sticky rice is usually eaten in the peak mango season, the summer months of April and May in Thailand. The notable mango sticky rice shops in Bangkok such as the Wong Wian Yi Sip Song Karakadakhom neighborhood in Pom Prap Sattru Phai near Hua Lamphong, which will only sell for 4 months per year, and at the Samphrang neighborhood in Phra Nakhon near Giant Swing and Chao Por Suea Joss House, with the Ban Mo near Si Kak Phraya Si Intersection and Pak Khlong Talat.

Khanom Khai also known as Khanom Boo Lhoo is a Thai dessert. It becomes a popular Thai snack because of the size and its palatable taste. “Khanom” means dessert and “Khai” means egg. Khanom Khai is made from egg, sugar and flour. It is crispy on the outside and soft on the inside. The taste of the dessert is similar to cake, whereas its texture is rougher because of the different types of flour and the different proportion of ingredients. Traditional Khanom Khai has the scent of egg after baking in charcoal stove. 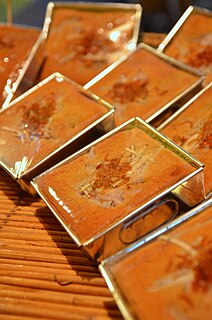 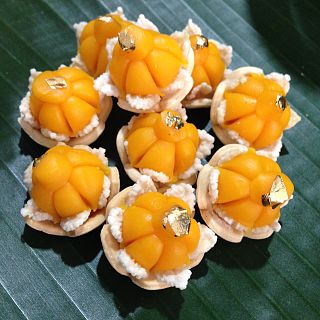 Thong ek, also known as "Wheat Flour Dumplings with Egg Yolks ", is one of the nine auspicious traditional Thai desserts. It is a golden sweet carved as various types of flowers decorated with a piece of gold leaf on top, popularly served in very significant occasions such as career advancement ceremonies. 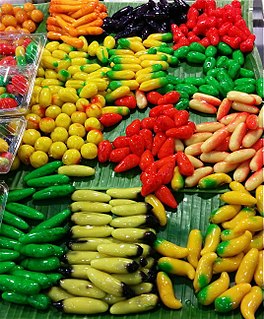 Khanom sot sai, also known as khanom sai sai, is a Thai dessert with a sweet filling. It is made up of coconut and palm sugar, and the filling is covered with steamed flour mixed with coconut cream. It was used at Thai wedding ceremonies in ancient times. It is traditionally packed by wrapping in a banana leaf.

Khanom khai pla is a type of Thai dessert. It can be considered as a rare and little known dessert.