Thuan Tong may refer to:

Lê Thuần Tông birth name Lê Duy Tường was the thirteenth and fourth-last emperor of Vietnamese Lê Dynasty under the domination of the Trịnh Lords. He reigned from 1732 to 1735 and was succeeded by Lê Ý Tông.

The Hồ dynasty was a short-lived six-year reign of two emperors, Hồ Quý Ly in 1400–01 and his second son, Hồ Hán Thương, who reigned from 1401 to 1406. The practice of bequeathing the throne to a designated son was similar to what had happened in the previous Trần dynasty and was meant to avoid sibling rivalry. Hồ Quý Ly's eldest son, Hồ Nguyên Trừng, played his part as the dynasty's military general. In 2011, UNESCO declared the Citadel of the Hồ Dynasty in Thanh Hóa Province a world heritage site.

Trịnh lords, also known as Trịnh clan or House of Trịnh, were a noble feudal clan who were the de facto rulers of northern Vietnam while Nguyễn lords ruled the southern Vietnam during the Later Lê dynasty. Both of two rulers referred to themselves as Chúa (lord) and controlled their countries while the Later Lê emperors did not have any real power, only maintained their title. The Trịnh lords traced their descent from Trịnh Khả, a friend and advisor to the 15th-century Vietnamese Emperor Lê Lợi. The Trịnh clan had officially 12 lords that ruled Northern Vietnam and the royal court of Later Lê dynasty for more than 2 centuries. 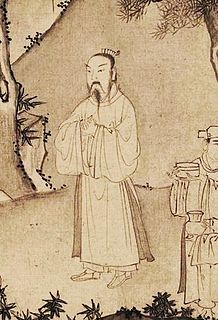 Trần Thiếu Đế, was the twelfth and the last emperor of the Trần dynasty who reigned over Vietnam from 1398 to 1400.

Lê Duy Phường was the twelfth and fifth-last emperor of Vietnamese Lê Dynasty. He was imprisoned shortly after his reign began and reigned under arrest from 1729 to 1732 until he was murdered by Trịnh Giang, and was succeeded by his older brother, Lê Thuần Tông.

Lê Uy Mục, also called Lê Tuấn (黎濬), was the eighth emperor of the later Lê dynasty of Vietnam. He was the second son of Emperor Lê Hiến Tông and the elder half-brother of his direct predecessor, Emperor Lê Túc Tông.