Thudayannoor is a village located in Ittiva Grama Panchayath in the eastern part of Kollam district, Kerala state, India. It is 2 km away from Oil Pam India Ltd (plantation), 57 km from Trivandrum and 42 km from Kollam town. The Kadakkal - Anchal road passes through the village.

The village is an important business centre, with Kattampally market and Manaluvattom market and businesses including rubber, coconut, tapioca and blackpaper. The nearest towns are Kadakkal and Anchal. Its Pincode is 691536. Education institutions are Kattampally UPS and Kavitha; Thudayannoor Service Cooperative Bank is the major bank in the locality. Kanyarkayam waterfall located 2 km away from thudayannoor in Oil Palm India Ltd is a major attraction of Thudayannoor, people from far distances also come here to visit this waterfall. 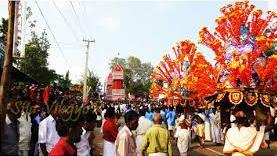 Kadakkal is a historic town located in the eastern part of Kollam district, Kerala. It is 44 km away from both Kollam City and Thiruvananthapuram. State highway 64 passes through the town. The town is an important business centre and is known for its spice production and trade. Kadakkal is reachable through Nilamel, and is well connected through Anchal, Kilimanoor and Madathara. Kadakkal is one of the places which facilitates the easiest roadway access to the neighbouring state Tamil Nadu. The town is only 50 km away from Tamil Nadu border.

Anchal is a town located in the centre of the Kollam district of Kerala, India, between National Highway 744 and Main Central Road.

Chathannoor is a town in Kerala situated at the Kollam District on the banks of Ithikkara River. It is about 16 km from Kollam City. Chathannoor is around 55 km north of the state capital Thiruvananthapuram. 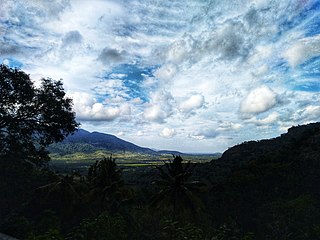 Aryankavu is a village in Punalur, Kollam district, Kerala. It lies on National Highway 744 near Thenmala. It is a mountain pass in Western Ghats. The Punalur-Shenkottai broad gauge railway line also passes through Aryankavu. Aryankavu is 78 km away from Kollam and 36 km away from Punalur.

Ayoor is a Town in Edamulakkal Panchayath of Punalur Taluk, Kollam district, Kerala state, India. Ayoor is located on the M C Road. It is 32 km east of Kollam City, 17 km south of Kottarakara and 55 km north of Thiruvananthapuram City. Punalur City is 19 Km, Anchal is 8 km away and Nilamel and Kadakkal lies south of Ayoor. The place is a commercial center with rubber, paddy, cashew and pepper being the main trading items. The nearest airport is Thiruvananthapuram International Airport, 62 km south of Ayoor. Kollam Junction Railway Station is 31 km away. 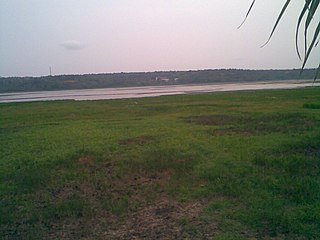 Vettikkavala is a village in Kollam district in the state of Kerala, India. It is famous for the famous Shiva-Vishnu temple situated there with a special deity called Vathukkal Njaali Kunju for whom there's an annual offering of Pongala. 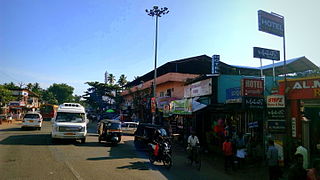 Kavanad is a suburban area of Kollam Municipal Corporation in Kerala. It is a major market town located at the northern suburb of Kollam City in India. It is coming under Sakthikulangara zone of Kollam Municipal Corporation. It is just 3 km from the port town of Neendakara. Kavanad, a narrow strip of land sandwiched between the Arabian Sea and the Ashtamudi Lake has one of the highest land values in Kollam city. The town emerged as a major shopping destination in Kollam with the advent of a number of shopping centres. A number of vehicle showrooms are also located at Kavanad-Ramankulangara-Mulamkadakam stretch. The long anticipated Kollam bypass starts just a kilometer before Kavanad from the place called Altharamoodu and was completed on January 2019, Kavanadu had become a major vantage point en route to Trivandrum from Alappuzha and is a fast developing satellite town within Kollam Metropolitan Area. You can also find 24 hr working shops in Kavanad which is a rarity in Kerala. Kavanadu is a major tourist attraction of Kollam district.

Valiyode is a village in Kollam district, Kerala state, India. It is also the first Ward of the Elamad Grama Panchayat in Kottarakkara Tehsil.

Peringad is a village near to Kadakkal Town in Kollam District, Kerala, India.

പോങ്ങനാട് is a small developing town near Kilimanoor ,its in chirayinkeezh Taluk in Thiruvananthapuram District of Kerala State, India. It comes under Kilimanoor Panchayath. It belongs to South Kerala Division. It is located 40 km towards North from District headquarters Thiruvananthapuram. 3 km from Kilimanoor. 40 km from State capital. PonganaduPin code is 695601 and postal head office is Kilimanoor .This Ponganadu pincode number can be used as location tracker for India's largest online shopping companies such as snapdeal, flipkart, eBay, amazon, paytm, homeshop18, infibeam, junglee, mynthra, yebhi etc., these companies sending the product on the basis of Ponganadu pincode. 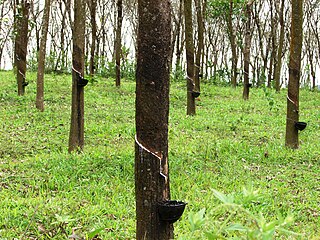 Vilakkupara is a village in Anchal Block Panchayath, Kollam District, Kerala State, India. Vilakkupara lies 58 km to the east of Kollam, the District headquarters, and 12 km to the southeast of Punalur on Kollam-Thirumangalam National Highway (N.H-744). It is 72 km north of Thiruvananthapuram, the State Capital. It is belongs to Yeroor Gram panchayat of Anchal Block Panchayath, Punalur Assembly Constituency, and is part of Kollam Lok Sabha constituency.

Mannoor is a village in Ittiva Grama Panchayath located towards the west of Kollam district of Kerala, India.. It is located on the west of the Main Central Road. The closest towns are Anchal and Punalur. The village is also close to Kadakkal, an agricultural village known for its spice production and the Kadakkal Devi Temple. Thiruvananthapuram, formerly Trivandrum, is 65 kilometres (40 mi) from Mannoor and is the closest airport. Kollam, formerly Quilon, the district headquarters, is 46 kilometres (29 mi) away.