Thug Behram (c. 1765 – 1840), also known as Buhram Jamedar and the King of the Thugs, was a leader of the Thuggee cult active in Oudh in central India during the late 18th and early 19th century, and is often cited as one of the world's most prolific serial killers. He may have been involved in up to 931 murders by strangulation between 1790 and 1840 performed with a ceremonial rumāl, a handkerchief-like cloth used by his cult as a garrote. Only 125 were confirmed. [1] [2] [3]

While Behram is sometimes suspected of having committed 931 murders, James Paton, an East India Company officer working for the Thuggee and Dacoity Office in the 1830s who wrote a manuscript on Thuggee, quotes Behram as saying he had "been present" at 931 cases of murder, and "I may have strangled with my own hands about 125 men, and I may have seen strangled 150 more." [4]

The English word 'thug' is in fact borrowed from the Hindi word 'thag' (ठग). The thugs were covert members of a group, and the term 'Thugee' typically referred to an act of deceitful and organised robbery and murder. [5]

Buhram used his cummerbund or rumāl , with a large medallion sewn into it, as a garrote to execute his killing. Through sheer skill, he could cast the rumal to cause the medallion to land at the adam's apple of his victims, adding pressure to the throat when he strangled them.[ citation needed ]

Thuggee are actions and crimes carried out by Thugs, historically, organised gangs of professional robbers and murderers in India. The English word thug traces its roots to the Hindi ठग, which means 'swindler' or 'deceiver'. Related words are the verb thugna, from the Sanskrit स्थग and स्थगति. This term, describing the murder and robbery of travellers by a group of Kali worshippers, was popular in the northern and eastern regions of historical India.

Thug or THUG may refer to: 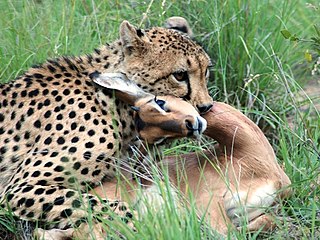 Strangling is compression of the neck that may lead to unconsciousness or death by causing an increasingly hypoxic state in the brain. Fatal strangling typically occurs in cases of violence, accidents, and is one of two main ways that hanging causes death. 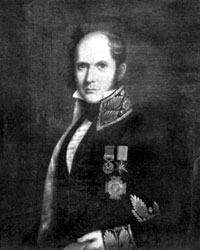 Major-general Sir William Henry Sleeman KCB was a British soldier and administrator in British India. He is best known for his work from the 1830s in suppressing the organized criminal gangs known as Thuggee. He also discovered the holotype specimen of the sauropod dinosaur Titanosaurus indicus in Jabalpur in 1828. 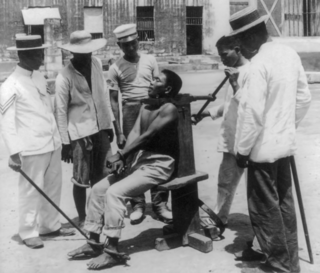 A garrote or garrote vil is a weapon, usually a handheld ligature of chain, rope, scarf, wire or fishing line, used to strangle a person.

Jemadar or jamadar is a title used for various military and other officials in the Indian subcontinent.

The Deceivers is a 1952 novel by John Masters on the Thuggee movement in India during the period of British rule during the 19th-century.

Behram may refer to:

Gunga Din is a 1939 American adventure film from RKO Radio Pictures directed by George Stevens and starring Cary Grant, Victor McLaglen, and Douglas Fairbanks Jr., loosely based on the 1890 poem of the same name by Rudyard Kipling combined with elements of his 1888 short story collection Soldiers Three. The film is about three British sergeants and Gunga Din, their native bhisti, who fight the Thuggee, an Indian murder cult, in colonial British India.

Confessions of a Thug is an English novel written by Philip Meadows Taylor in 1839 based on the Thuggee cult in India. It was a best-seller in 19th-century Britain, becoming the British Empire's most sensational ethnographic fiction in the first half of the 19th century; its avid readers included Queen Victoria. It was one of the best-selling crime novels of the 19th century, and was the most influential novel about India prior to Rudyard Kipling's Kim (1901). The novel's popularity established the word "thug" in the English language.

Bahram or Vahram or Behram, variant Bahran or Vahran, meaning "smiting of resistance" or "victorious", is a Persian name. 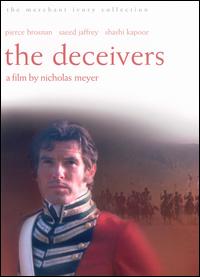 The Deceivers is a 1988 adventure film directed by Nicholas Meyer, starring Pierce Brosnan, Shashi Kapoor and Saeed Jaffrey. The film is based on the 1952 John Masters novel of the same name regarding the murderous Thuggee of India. 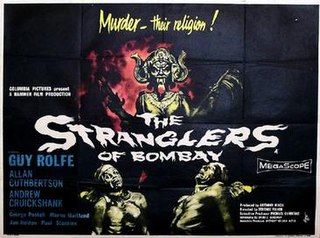 The Stranglers of Bombay is a 1959 British adventure horror film directed by Terence Fisher for Hammer Films dealing with the British East India Company's investigation of the cult of Thuggee stranglers in the 1830s. The film stars Guy Rolfe, Allan Cuthbertson and Andrew Cruickshank.

Norman Avzal Simons, known as The Station Strangler, is a South African rapist and suspected serial killer who was convicted in 1995 of the rape and murder of 10-year-old Elroy van Rooyen. He was sentenced to 35 years in prison. 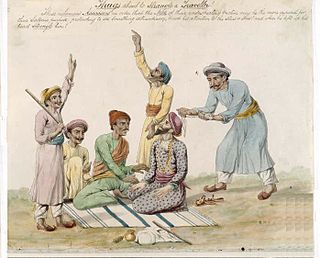 The Thuggee and Dacoity Suppression Acts, 1836–48 in British India under East India Company rule were a series of legal acts that outlawed thugee—a practice in North and Central India involving robbery and ritualized murder and mutilation on highways—and dacoity, a form of banditry prevalent in the same region, and prescribed punishment for the same. 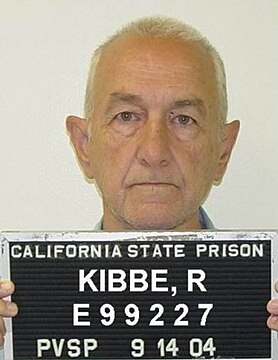 Roger Reece Kibbe was an American serial killer and rapist known as the "I-5 Strangler". Kibbe found all but one of his victims on freeways around Sacramento, California. In 1991 he was sentenced to 25 years to life imprisonment for the death of Darcie Frackenpohl.

The Deadly Dozen: India's Most Notorious Serial Killers is the 2019 debut true-crime non-fiction novel by Anirban Bhattacharyya the Indian author, standup comedian, actor, producer, writer and co-creator of the TV show Savdhaan India. The book became the No.1 Bestseller on Amazon India. The book was launched by film director Anurag Kashyap in Mumbai.