Thukha Yadana Company (Burmese : သုခရတနာကုမ္ပဏီ; also spelt Thukhar Yadanar) is a construction company based in Myanmar. It was one of four Burmese firms involved in the Dagon City 1 project, a major planned development in Dagon Township, Yangon, near the Shwedagon Pagoda. [2] The project was shut down by the national government on 7 July 2015 over growing public opposition to the project. [2] The project had been temporarily suspended in February 2015 by the Yangon City Development Committee. [1]

Yangon, also known as Rangoon, is the capital of the Yangon Region and the largest city of Myanmar. Yangon served as the capital of Myanmar until 2006, when the military government relocated the administrative functions to the purpose-built city of Naypyidaw [nèpjìdɔ̀] in central Myanmar. With over 7 million people, Yangon is Myanmar's most populous city and its most important commercial centre.

Yangon Region is an administrative region of Myanmar. Located in the heart of Lower Myanmar, the division is bordered by Bago Region to the north and east, the Gulf of Martaban to the south, and Ayeyarwady Region to the west. Yangon Region is dominated by its capital city of Yangon, the former national capital and the largest city in the country. Other important cities are Thanlyin and Twante. The division is the most developed region of the country and the main international gateway. The division measures 10,170 km2 (3,930 sq mi). 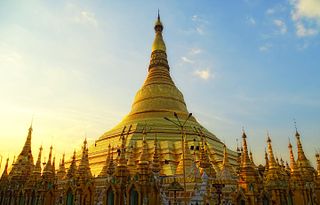 The Shwedagon Pagoda, officially named Shwedagon Zedi Daw and also known as the Great Dagon Pagoda and the Golden Pagoda, is a gilded stupa located in Yangon, Myanmar. The 326-foot-tall (99 m) pagoda is situated on Singuttara Hill, to the west of Kandawgyi Lake, and dominates the Yangon skyline.

Naypyidaw, officially spelled Nay Pyi Taw, is the capital city of Myanmar. The city is located at the center of the Naypyidaw Union Territory. It is unusual among Myanmar's cities, being an entirely planned city outside of any state or region, similar to Canberra in Australia, Brasília in Brazil, Washington, D.C. in the United States, Islamabad in Pakistan or Abuja in Nigeria. The city officially replaced Yangon as the administrative capital of Myanmar in 2006. 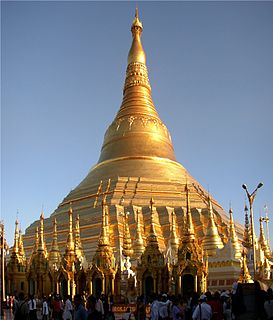 Dagon Seikkan Township is an urban township of Yangon, Burma (Myanmar). Located in the east-central part of the city of Yangon (Rangoon). Satellite communities and industry moved into the township in the 1990s, growing from a rural population of under 10,000 to almost 100,000 by 2010. As of 2009, Dagon Seikkan consisted of 39 wards and five village tracts. As of 2000, the township had 10 primary schools, two middle schools and a high school. The township is in an industrial area of the city. Nationalities Youth Resource Development Degree College, Yangon is located in the township. 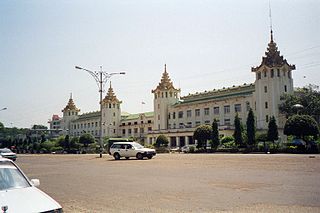 The Great Bell of Dhammazedi is a bronze bell, believed to be the largest bell ever cast. It was cast on 5 February 1484 by order of King Dhammazedi of Hanthawaddy Pegu, and was given as a present to the Shwedagon Pagoda of Dagon.

Yangon Circular Railway is the local commuter rail network that serves the Yangon metropolitan area. Operated by Myanmar Railways, the 45.9-kilometre (28.5 mi) 39-station loop system connects satellite towns and suburban areas to the city. Circa 2008–2010, the railway had about 200 coaches, had 20 daily runs, and sold 100,000 to 150,000 tickets daily. The loop, which takes about three hours to complete, is a way to see a cross section of life in Yangon. The Railway is heavily utilized by lower-income commuters, as it is the cheapest method of transportation in Yangon.

The Yangon City Heritage List is a list of man-made landmarks in Yangon, Myanmar, so designated by the city government, Yangon City Development Committee. The list consists of 188 structures, and is largely made up of mostly religious structures and British colonial era buildings. The list is presented by the township in which the structures are located. In 2010, the Ministry of Culture further announced that 16 ancient pagodas in Yangon Division are recognized as cultural heritage sites, effective 10 February 2010. The Shwedagon Pagoda is recognized as both an Ancient Monument Zone and Protected and Preserved Zone. The other 15 are listed as Ancient Monument Zone.

The Belmond Governor's Residence is a Victorian-style hotel located in Dagon Township, Yangon, Myanmar (Burma), located in a teak mansion from the 1920s. It is located in the Embassy Quarter near the Shwedagon Pagoda, the National Museum, the former Foreign Ministry office compound and India House - now the official residence of the ambassador of India.

The Maha Wizaya Pagoda is a pagoda located on Shwedagon Pagoda Road in Dagon Township, Yangon, Myanmar. The pagoda, built in 1980, is located immediately south of the Shwedagon Pagoda on Dhammarakhita Hill. The enshrined relics were contributed by the King of Nepal, while the pagoda's hti (umbrella) was consecrated by Ne Win, the country's former leader. The construction of this particular pagoda is believed by some scholars to have been a form of merit-making on the part of Ne Win.

The following is a timeline of the history of the city of Yangon, Myanmar.

The Singu Min Bell, also known as the Maha Gandha Bell, is a large bell located at the Shwedagon Pagoda in Yangon, Myanmar (Burma). It was donated in 1779 by King Singu, the fourth king of Konbaung Dynasty. The official Pali name of the bell is Maha Gandha, which means "Great Sound". 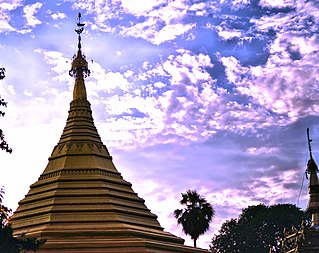 Commercial brewing of beer in Myanmar commenced in 1886 and until 2015 was dominated by a single producer, Myanmar Brewery Ltd.

The Kyaikhtisaung Sayadaw was a prominent Buddhist monk and weizza from Myanmar. Throughout his life, he restored nine Buddha Hair Relic Pagodas across the country, most of which were in Mon State.