Last updated July 22, 2022
Not to be confused with Thull.
Town in Sindh, Pakistan

Thul (Sindhi : ٺل شهر) is the town of Jacobabad District in the Sindh Province of Pakistan. [1] It is located at 28°14'0N 68°46'0E at an altitude of 59 metres (196 feet). Thul is biggest Tehsil of Sindh; It 10 Police Stations, 3 Town Committees, 1 Civil Hospital and 5 rural Health centers, that are working. [2] It has a degree college on Mir Pur Burriro road. Thul has the largest rice industry in the city of Sindh.

ShikarpurŚikārpūr) is city and the capital of Shikarpur District in Sindh province of Pakistan. It is situated about 29 km west of the right bank of the Indus, with a railway station, 37 km north-west of Sukkur. It is the 42nd largest city of Pakistan by population according to the 2017 census. 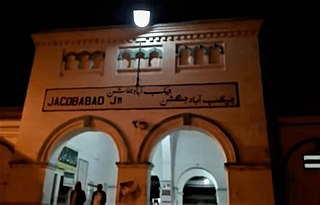 Jacobabad is a city in Sindh, Pakistan, serving as both the capital city of Jacobabad District and the administrative center of Jacobabad Taluka, an administrative subdivision of the district. The city itself is subdivided into eight Union Councils. Sitting far to the northwest of the province, near the provincial boundaries of Sindh and Balochistan, Jacobabad became a city on the site of an existing village (Khangarh), and is crossed by the Pakistan Railways and many main roads of the province. It is the 43rd most populous city in Pakistan.

Kashmore District, previously known as Khizmer or Khizmore, is a district of the province of Sindh, Pakistan. The capital city is Kandhkot. The district has a population of 1,090,336. Kashmore District is a part of Larkana Division. Its old name was Khizmer or Khizmor. The spoken languages are Sindhi and Balochi. Its border is connected with Punjab and Balochistan provinces. Kashmore city is gateway to Punjab province and Balochistan province. In 2004, Kashmore became a district after its separation from Jacobabad District. 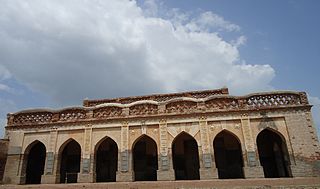 Larkana Division is an administrative division of the Sindh Province of Pakistan. It was abolished in 2000 but restored again on 11 July 2011.

Ratodero Tehsil is a Tehsil of Larkana District in the Sindh province of Pakistan, it is located some 28 km from the district capital Larkana. Before the independence, the city has a special reputation for its sweet products. The most special is known as Mawa and handmade caps known as Sindhi topi and footwear. At present the principal trade of the town is that of paddy and rice, and there are many rice mills.

Jacobabad Tehsil is an administrative subdivision (tehsil) of Jacobabad District, Sindh, Pakistan. It is subdivided into 15 Union Councils, 8 of which comprise the capital Jacobabad

Mir Naseer Khan Khoso is a Chhutani Khoso from Madadpur village in the Thul Sub Division of Jacobabad District. A well known politician, he became a Member of Provincial Assembly (MPA) in 1997 for the first time and became Minister of Sindh. In 2002 he was elected MPA second time.

Thul Tehsil is an administrative Tehsil of Jacobabad District in the Sindh province of Pakistan. The subdivision is administratively subdivided into 24 Union Councils, two of which form the capital, Thul. Thul is one of the densely populated Taluka of District Jacobabad, spreading over 317,520 acres. It consists of about half of the population of whole district and its population is approximately 356,705. There are 19 union councils and 96 Dehs in this taluka. The headquarters of this taluka are about 33 km at the east side of district headquarters and connected with rail and road with other parts such as Kandhkot, Shikarpur and Baluchistan province.

Jacobabad Junction railway station is located in Jacobabad, Sindh, Pakistan. Jacobabad serves as a major junction for Pakistan Railways network with tracks branching off to Kot Addu. It is staffed and has a booking office.

Sohbatpur District is a district in the Pakistani province of Balochistan.

Thull is a surname. People with that name include: 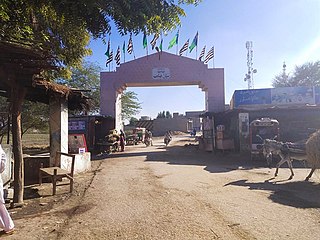 Mubarakpur is a town in the Jacobabad District in Sindh Province of Pakistan.Near Mian Sahib and Thul in Sindh Province Of Pakistan .It is located at 28° 10' 8.4972 N68° 38' 18.2148E with an altitude of 47 metres its original name is Shāhal. The Mohallas in Mubarakpur include Bhutta Muhalla, Soomra Mohalla, Mahar Muhalla, Mastoi Mohalla,Hussaini Mohalla, and Mohalla Shaheed Zulifqar Ali Bhutto. Bhuttos are in majority and have strong influence in political and social effect upon the economical background of Mubarakpur. The population of this city is estimated around 28,000. There are both private Schools/Colleges & Schools *