Last updated February 07, 2020
This article is about the poetic genre. For other uses, see Thula (disambiguation).

Thula ( /ˈθuːlə/ ; pl. thulas, from Old Norse : þula pl. þulur), is the name of an ancient poetic genre in the Germanic literatures. Thulas are metrical name-lists or lists [1] of poetic synonyms compiled, mainly, for oral recitation. The main function of thulas is thought to be mnemonic. The Old Norse term was first applied to an English poem, the Old English Widsith , by Andreas Heusler and Wilhelm Ranisch in 1903. [2] Thulas occur as parts of longer poems, too; Old Norse examples are found in various passages of the poetic and the prose Edda (esp. Skáldskaparmál with the Nafnaþulur, Grímnismál, Alvíssmál), the Rígsþula as well as in the Völuspá. Thulas can be considered as sources of once canonic knowledge, rooted in prehistoric beliefs and rituals. They generally preserve mythological and cosmogonical knowledge, often proper names and toponyms, but also the names of semi-legendary or historical persons. Their language is usually highly formalized, and they make extensive use of mnemonic devices such as alliteration. For a number of archaic words and formulas some thulas are the only available source. The term and the genre may go back to the function of the Thyle (Old Norse : þulr), who held the function of an orator and was responsible for the cultus.

The different versions of the Anglo-Saxon Chronicle start off with the names of the English rulers back to Woden in metrical form:

The longest Old English thulas, though, are part of the poem Widsith , listing, in the first thula, 30 kings, 54 tribes in the second, and 28 men in the third and last thula.

Lists of names and objects abound in texts other than early Germanic ones, too. In classic Greek and Latin poetry, lists, or catalogues, function as forms of amplificatio (see amplification) and enumeratio. Ovid includes a catalogue of trees in his Metamorphoses (10.90-108). [3] Lists in works by later medieval authors follow the classic models rather than the thulas, even though the poetic effect may be similar. A good example is found in Chaucer's Parlement of Foules , which, among other things, features a list of trees:

The bilder ook, and eek the hardy asshe;
The piler elm, the cofre unto careyne;
The boxtree piper; holm to whippes lasshe;
The sayling firr; the cipres, deth to pleyne;
The sheter ew, the asp for shaftes pleyne;
The olyve of pees, and eek the drunken vyne,
The victor palm, the laurer to devyne. [4]

The "Wood of Error" in Edmund Spenser's in The Faerie Queene (I.i.8-9) is a similar catalogue of trees, based on that of Ovid. Among modern authors, James Joyce, for instance, includes numerous lists in his Ulysses and Finnegans Wake , e.g. a list of the books in Leopold Bloom's library. ( Ulysses 17.1357ff.) [5] 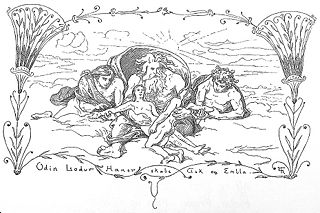 In Norse mythology, Ask and Embla —male and female respectively—were the first two humans, created by the gods. The pair are attested in both the Poetic Edda, compiled in the 13th century from earlier traditional sources, and the Prose Edda, written in the 13th century by Snorri Sturluson. In both sources, three gods, one of whom is Odin, find Ask and Embla and bestow upon them various corporeal and spiritual gifts. A number of theories have been proposed to explain the two figures, and there are occasional references to them in popular culture. 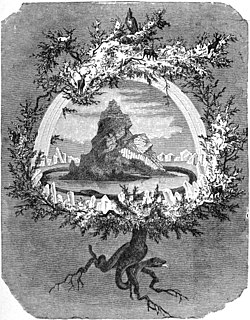 Yggdrasil is an immense mythical tree that plays a central role in Norse cosmology, where it connects the Nine Worlds.

Ermanaric was a Greuthungian Gothic King who before the Hunnic invasion evidently ruled a sizable portion of Oium, the part of Scythia inhabited by the Goths at the time. He is mentioned in two Roman sources; the contemporary writings of Ammianus Marcellinus and in Getica by the 6th-century historian Jordanes.

"Widsith", also known as The Traveller's Song, is an Old English poem of 143 lines. The poem survives only in the Exeter Book, a manuscript of Old English poetry compiled in the late 10th century containing approximately one-sixth of all surviving Old English poetry. Widsith is located between the poems Vainglory and The Fortunes of Men. Since the donation of the Exeter Book in 1076, it has been housed in Exeter Cathedral in southwestern England. The poem is for the most part a survey of the people, kings, and heroes of Europe in the Heroic Age of Northern Europe.

Norse cosmology is the study of the cosmos (cosmology) as perceived by the North Germanic peoples. The topic encompasses concepts from Norse mythology, such as notions of time and space, cosmogony, personifications, anthropogeny, and eschatology. Like other aspects of Norse mythology, these concepts are primarily recorded in the Poetic Edda, a collection of poems compiled in the 13th century, and the Prose Edda, authored by Icelander Snorri Sturluson in the 13th century, who drew from earlier traditional sources. Together these sources depict an image of Nine Worlds around a cosmic tree, Yggdrasil.

Rune poems are poems that list the letters of runic alphabets while providing an explanatory poetic stanza for each letter. Three different poems have been preserved: the Anglo-Saxon Rune Poem, the Norwegian Rune Poem, and the Icelandic Rune Poem.

Breca was a Bronding who, according to the Anglo-Saxon poem Beowulf, was Beowulf's childhood friend. Breca defeated Beowulf in what, by consensus, is described as a swimming match.

Wade, is the English name for a common Germanic mythological character who, depending on location, is also known as Vadi (Norse) and Wate.

The Angles were a dominant Germanic tribe in the Anglo-Saxon settlement of Britain, and gave their name to the English, England and to the region of East Anglia. Originally from Angeln, present-day Schleswig-Holstein, a legendary list of their kings has been preserved in the heroic poems Widsith and Beowulf, and the Anglo-Saxon Chronicle.

A thyle was a member of the court associated with Scandinavian and Anglo-Saxon royalty and chieftains in the Early Middle Ages, whose precise role is uncertain but probably had to do with the preservation of knowledge of the past and the judging of present statements against it.

Haguna or Hagana is a historical Germanic name. It is attested in the form Hagano in Old High German and as Haguna and Hagena in Old English. Old West Norse has Hǫgni, presumably loaned from the character in German legend. Old Danish has Haghni and Hoghni; Old Swedish Haghne and Høghne.

Trees hold a particular role in Germanic paganism and Germanic mythology, both as individuals and in groups. The central role of trees in Germanic religion is noted in the earliest written reports about the Germanic peoples, with the Roman historian Tacitus stating that Germanic cult practices took place exclusively in groves rather than temples. Scholars consider that reverence for and rites performed at individual trees are derived from the mythological role of the world tree, Yggdrasil; onomastic and some historical evidence also connects individual deities to both groves and individual trees. After Christianization, trees continue to play a significant role in the folk beliefs of the Germanic peoples.