Thuli Visham (transl. One Drop of Poison) is a 1954 Indian Tamil film, directed by A. S. A. Sami and produced by V. L. Narasu under the Narasu Studios banner. The film stars K. R. Ramasamy, Sivaji Ganesan, Krishna Kumari and S. V. Ranga Rao in lead roles. The film had musical score by K. N. Dhandayudapani Pillai. [1] [2] The Telugu version Raja Guruvu was released in the same year.

Adapted from the song book [3] and the opening credits.

Or Iravu is a 1951 Indian Tamil-language film directed by P. Neelakantan and co-written by him and C. N. Annadurai. Produced by AVM Productions, it is based on Annadurai's play of the same name. The film stars K. R. Ramasamy, reprising his role from the play. It was released on 11 April 1951 and received well by critics, but failed commercially.

Prema Pasam is a 1956 Indian Tamil-language drama film, produced by V. L. Narasu under the Narasu Studios banner and directed by Vedantam Raghavaiah. It is a remake of the Hindi-language film Kismet (1943). The film stars Gemini Ganesan and Savitri, with music composed by S. Rajeswara Rao. It was simultaneously shot in Telugu as Bhale Ramudu (1956).

Konjum Salangai is a 1962 Indian Tamil-language musical film directed by M. V. Raman. The film features Gemini Ganesan, Savitri, R. S. Manohar and Kumari Kamala in lead roles. The film, had musical score by S. M. Subbaiah Naidu and was released on 14 January 1962. The film was dubbed into Telugu as Muripinche Muvvalu. This film is the Indian Tamil cinema's one and only Tamil film to be entirely shot and released in Technicolor. 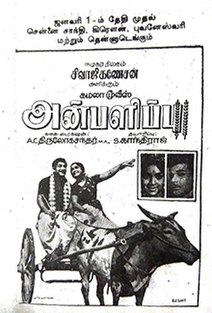 Anbalippu is a 1969 Indian Tamil-language film, directed by A. C. Tirulokchandar and produced by S. Gandhiraj. The film stars Sivaji Ganesan, B. Sarojadevi, Vijayanirmala and Jaishankar. The film had musical score by M. S. Viswanathan. The film was hit at box-office. 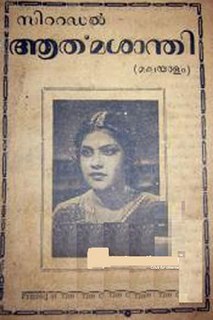 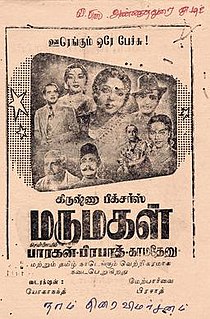 Boologa Rambai is a 1958 Indian Tamil-language film, directed by D. Yoganand and produced by Ashoka Pictures. The film dialogue was written by Aru Ramanathan and Viruthai Na. Ramasamy and the screenplay was written by K. Ramnath. Music by C. N. Pandurangan is an asset to the movie. The film stars Gemini Ganesan, Anjali Devi, P. S. Veerappa and M. N. Nambiar playing lead role, with Rajasulochana, K. A. Thangavelu and A. Karunanidhi.

Nalla Idathu Sammandham is 1958 Indian Tamil-language drama film directed by K. Somu. It was the debut production of writer A. P. Nagarajan, who co-produced the film with V. K. Ramasamy. The story was provided by Ramasamy himself, while screenplay and dialogues were written by Nagarajan. It stars M. R. Radha, Prem Nazir, Sowcar Janaki and M. N. Rajam. The film's soundtrack and background score were composed by K. V. Mahadevan. 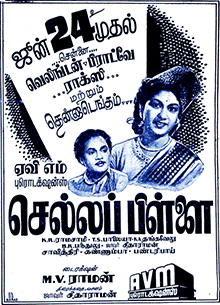 Chella Pillai is a 1955 Indian Tamil-language comedy-drama film directed by M. V. Raman and produced by A. V. Meiyappan under his AVM Productions company. The film script was written by Javar Seetharaman. Music by R. Sudharsanam is an asset to the film. It stars K. R. Ramasamy, Savitri, T. S. Balaiah, B. R. Panthulu and P. Kannamba playing lead, with Pandari Bai, K. A. Thangavelu, Javar Seetharaman and Kaka Radhakrishnan in supporting roles. The film was remade in Telugu as Vadina (1955). Showering affection or enforcing firm discipline, which one is necessary in bringing up a child, especially if he is an orphan? That was the theme of Chella Pillai.

Needhipathi is a 1955 Indian Tamil language film directed by A. S. A. Sami. The film featured K. R. Ramasamy, Gemini Ganesan, Rajasulochana and M. N. Rajam in the lead roles. 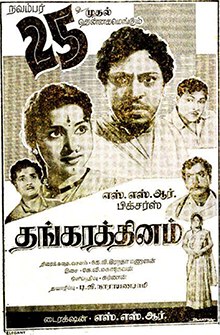 Thangarathinam is a 1960 Indian, Tamil-language film directed by S. S. Rajendran. The film featured S. S. Rajendran and Vijayakumari in the lead roles. 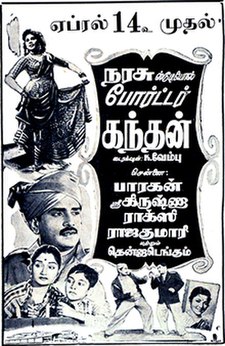 Thayapola Pillai Noolapola Selai is a 1959 Indian Tamil-language film written and co-produced by A. P. Nagarajan and directed by K. Somu. 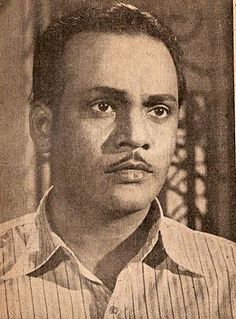 Kumbakonam Ramabadra Ramasamy, also known by his initials KRR, was an Indian actor and singer who worked mainly in Tamil theatre and cinema. He was born in Kumbakonam and was active during the early days of Tamil cinema. He was also the first actor who also dwelled into politics mainly with Dravidar Kazhagam and later with DMK, thus setting a trend for many other to follow.