Seenu, with a group of friends, is a prankster, spoiled brat, and big-time womaniser. He is addicted to sex and has sex with various women at any cost. It is shown in the introduction scene where an eloped couple meets them for help and the friends pretend to help them and take away the bridegroom from the place. Jeeva seduces the woman and enjoys having sex with her. Seenu's parents know about his attitude. They have advised him numerous times, but he is stubborn and considered it as a challenge by winning women's trust into having sex.

One fine day, he witnesses a group of thugs misbehaving with a girl named Shruthika. He immediately gets tempted of her and plans to help her to have sex with her. When he bashed all of the thugs, Shruthika instantly falls for him. They become good friends. One day, Jeeva invites Shruthika home and seduces her, ending up with both of them having sex. After that incident, he ill-treats her and asks her to either go out of town or get her pregnancy aborted. She tearfully leaves out of town to Ooty.

Before that, in a parallel scene, Seenu witnesses Shruthika forced by a woman named Gayathiri to lodge a police complaint against the man who betrays her, but she, feeling insecure to be known this by others, takes a step back. Gayathiri abuses that guy through words unknowingly; the man is none other than Seenu. He is angry and wants to avenge this insult. He plans to marry her, and after their first night, plans to escape to Goa.

After numerous attempts, Gayathiri gets convinced by her guardian, a doctor, to marry Seenu. After numerous failed attempts to seduce her, in her house, he hatches out a plan and fixes a honeymoon plan to Ooty. There, he meets Shruthika, his ex-victim who is now a tourist guide there in Ooty. Seenu obeys his wife's instructions and pretends to be a loyal husband. Gayathiri, who knows Shruthika earlier, introduces her to Seenu. Now Gayathiri's condition is that to believe him or to start a life with him, he must resolve the pending problem in Shruthika's life. He apologises to Shruthika and promises to marry her and also tells her that he will reveal everything to his wife, but he cunningly plans to fool both his ex-lover and wife. His friend Muthu tries to reveal everything to his wife, but Seenu drugs him by mixing sleeping pills in the coffee that he drinks. Muthu ends up revealing everything to Shruthika and telling her to at least try to save Gayathiri.

Seenu successfully has sex with Gayathiri and drugs her by mixing sleeping pills in the milk, leaving her unconscious. When he was to about to escape to Goa in a bus, Shruthika captures him and brings him to a mortuary. Shruthika abuses him with words and says "You love to touch women's body. Now touch this bodies till you satisfy". He is horrified by this and realises his mistake and his life as an animal. He asks forgiveness and tries to commit suicide, which is stopped by Shruthika. Shruthika asks him to live a good life with Gayathiri as that is his lifelong punishment. Outside the mortuary, they tell the awaiting Gayathiri that her lover died in an accident. Seenu and Gayathiri are joined hands by Shruthika. Seenu and Shruthika see each other for the one last time and bid a tearful goodbye, whereas Shruthika leaves the country forever and settles in Australia.

The film was first reported in June 2000, when Pravinkanth worked on the film alongside commitments of directing two other projects involving Prashanth and Ajith Kumar. The film was set to be produced by Anbalaya Films. [4] [5] In 2003, he began production on the film, in which he would play the central character and despite being launched amidst much fanfare, its theatrical release saw a delay. [6] [7] Chaya Singh was briefly attached to the project during 2003 before opting out. [8] 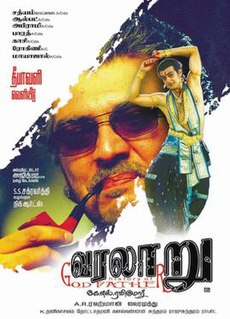 Varalaru: History Of Godfather, or simply known as Varalaru (transl. History), is a 2006 Indian Tamil-language action-drama film written and directed by K. S. Ravikumar, and produced by S. S. Chakravarthy under the banner NIC Arts. The film stars Ajith Kumar in a triple role as a father and his twin sons alongside Asin, Ramesh Khanna, Suman Setty, Kanika, Sujatha and M. S. Baskar play supporting roles. The film's soundtrack and background score was composed by A. R. Rahman. The film ran for 175 days and became a blockbuster at the box office. Prior to its release, the film was known by its title Godfather, but following the Government of Tamil Nadu's motion to exempt tax on films titled in Tamil in 2006, the film's title was changed. After two years of production, the film was released on 20 October 2006 during the eve of Diwali, and emerged as the highest grosser of the year. The film has been remade in Kannada, titled Godfather and in Burmese as Nat Khat Mhar Tae Tite Pwal, and in Odia as Tu Mo Dehara Chhai. This film was Sujatha’s last and final appearance. 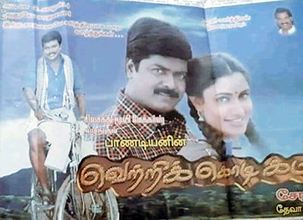 Vetri Kodi Kattu is a 2000 Indian Tamil-language drama film written and directed by Cheran. The film stars starring Murali, Parthiban, Meena, and Malavika, while Vadivelu, Manorama, Anandaraj, Vijayakumar, and Charle play supporting roles. The film's score and music was composed by Deva. The film released on 30 June 2000, and the comedy track between Parthiban and Vadivelu in this film was well received. 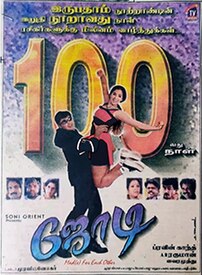 Jodi (transl. Couple) is a 1999 Indian Tamil-language romantic drama film directed by Praveen Gandhi and produced by Murali Manohar. The film stars Prashanth and Simran in the lead roles, with Vijayakumar, Nassar and Srividya in supporting roles. The soundtrack is composed by A. R. Rahman, featuring music reused from his own earlier soundtrack for the Hindi film Doli Saja Ke Rakhna, except for the song Oru Poiyavathu. Due to Rahman's unavailability, Praveen Gandhi signed Sabesh–Murali to quickly compose the background score. The film was the 25th film of Prashanth. The film was released on 9 September 1999. It opened to positive reviews and became a commercial success. A reviewer noted that "the director's light-veined screenplay keeps the movie moving at a good pace". The film was remade in Kannada in 2006 as Sajni. 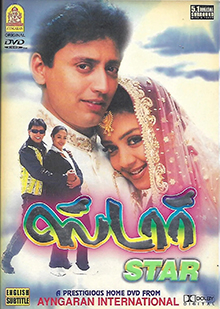 Star is a 2001 Indian Tamil-language action film directed by Praveen Gandhi and produced by Vijaykrishna. The film stars Prashanth and Jyothika while Raghuvaran, Vijayakumar, and Praveen Gandhi play other pivotal roles. The film's score and soundtrack are composed by A.R. Rahman, while the film is edited by M. N. Rajan.

Vaanathaippola is a 2000 Indian Tamil-language drama film written and directed by Vikraman. The film stars Vijayakanth in dual role. The supporting cast include Meena, Prabhu Deva, Livingston, Kausalya and Anju Aravind. Produced by Venu Ravichandran under Oscar Films, the film has a score and soundtrack composed by S. A. Rajkumar and cinematography handled by Arthur A. Wilson. The film tells the story of a caring brother who makes sacrifices to ensure his three younger brothers succeed in life. 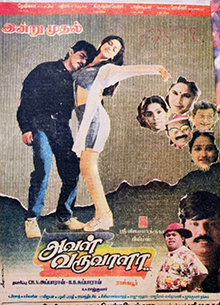 Aval Varuvala is a 1998 Indian Tamil-language romantic comedy thriller film directed by Raj Kapoor. It is the Tamil remake of the 1997 Telugu movie Pelli. The film stars Ajith Kumar and Simran, with Sujatha, Babloo Prithiveeraj, Goundamani and Senthil in other significant roles. It released on 15 May 1998 to positive reviews and became a commercial success. 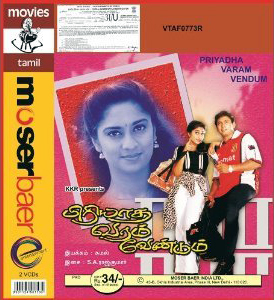 Piriyadha Varam Vendum is a 2001 Indian Tamil-language romantic comedy film written and directed by Kamal. It is a remake of his 1999 Malayalam film Niram. The movie stars Prashanth with Shalini and Jomol, while an ensemble cast featuring Manivannan and Janagaraj among others play supporting roles. Featuring music composed by S. A. Rajkumar, the film had an average box office run. This was Shalini's final Tamil film release prior to her retirement.

Anantha Poongatre is a 1999 Indian Tamil-language romantic drama film written and directed by Raj Kapoor. The film stars Ajith Kumar and Meena, with Karthik in a guest appearance. The film is based upon how respect can be mistaken as love by circumstances. The film released on 27 May 1999. It subsequently opened to positive reviews and became a commercial success.

Veera (transl. Hero) is a 1994 Indian Tamil-language romantic comedy film directed by Suresh Krissna and written by Panchu Arunachalam. It is a remake of the Telugu film Allari Mogudu (1992) and stars Rajinikanth, Meena and Roja with Janagaraj, Senthil, Vadivukkarasi, J. Livingston, Mahesh Anand, Vinu Chakravarthy, Ajay Rathnam, Vivek and Charuhasan in supporting roles. The film is about a man who marries twice because of circumstances beyond his control and is forced to live a double life to cover his tracks.

Lovely is a 2001 Indian Tamil-language romantic drama film directed by S. K. Jeeva who previously directed Pudhumai Pithan. The film stars Karthik, Malavika, and Monal, while Vivek, Manivannan, Nizhalgal Ravi, and Vinu Chakravarthy play supporting roles. The film's score and soundtrack are composed by Deva. The film was released on 6 July 2001. It was remade in Telugu as Andamaina Abaddham with Raja and Kamna.

Chinnavar is a 1992 Tamil language drama film directed by Gangai Amaran. The film stars Prabhu, Chandrasekhar and Kasthuri. The film was released on 24 April 1992.

Vamsam was a 2013-2017 Indian Tamil-language family soap opera starring Ramya Krishnan, Urvashi, Sandhya Jagarlamudi, Sakthi Saravanan, Sai Kiran and Bharath Kalyan. It replaced Rajakumari and it was broadcast on Sun TV on Monday through Saturday from 10 June 2013 to 18 November 2017 for 1338 Episodes.

Ganga Gowri is a 1997 Tamil-language romantic comedy film directed by Madheswaran. The film stars Arun Kumar, Sangita, and Mantra while Vadivelu, Dindigul I. Leoni, and Siva play supporting roles. The film had musical score by Sirpy and was released on 5 May 1997.

Praveen Gandhi is an Indian film director, and actor known for his works in Tamil cinema. 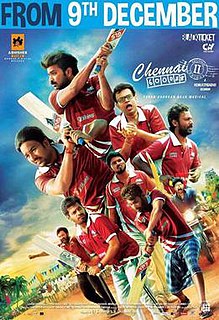 Chennai 600028 II is a 2016 Indian Tamil-language sports comedy film co-produced, written and directed by Venkat Prabhu, who also produces the film along with S. P. B. Charan under Black Ticket Company and Capital Film Works. The film, which is a sequel to Chennai 600028 (2007), features Vaibhav in a prominent role in addition to several cast members from the earlier film including Jai, Shiva, Premji, Aravind Akash, Inigo Prabakaran and Nithin Sathya. The film's score and soundtrack is composed by Yuvan Shankar Raja. The film was released on 9 December 2016 to positive reviews and performed well at the box office.