Thullum Kaalam is a 2005 Indian Tamil drama film directed and written by A. Sarana, making his directorial debut. The film features newcomers Shankar, Heera and Megha in lead roles, with Vineetha, Rajeev, Sriman, Pallavi, Rajini Nivetha and Kumarimuthu playing supporting roles. The film had musical score by S. P. Boopathy and was released on 29 July 2005. [1] [2] [3] [4] [5]

Sindhuraj alias Sindhu (Shankar) is a carefree plus two student who lives in Polur with his elder sister Porkodi (Vineetha), the village teacher whereas his elder brother Santhosh (Murugan) is an upright military officer. Porkodi lives only for her brothers and would do anything for her brothers. Sindhu always hangs out with his friends and enjoys teasing the villagers. Tamizhselvi (Heera) is a hard-working and haughty plus two student who hates her cousin Sindhu. After successfully passing the exam, Sindhu and his friends decide to pursue a bachelor's degree in science and apply to one of the colleges in the city.

At the college, his college mate Divya (Megha) fall in love with him, she is from a rich background. At the annual inter-college competition, Sindhu sings a song and won the first prize making the college proud. Later, Santhosh, on the holiday, returns to his village from the military camp. Her sister wants her brother Santhosh to marry her cousin Thamizhselvi but Thamizhselvi refuses to marry him for not getting enough money and humiliates them. When Divya wanted to introduce her lover Sindhu to her parents, Sindhu stood them up for various reasons. The first time, he got an opportunity to sing in a concert, so Divya's parents were understanding. While the second time, it was the last of college, therefore, his friends and he celebrated and got drunk, Divya and her parents were disappointed that he did not come. Worried about Sindhu, Divya goes to his college dorm and she sees the drunk Sindhu talks ill about her. The next day, Sindhu realizes his mistake and apologizes to Divya. Divya, who sincerely loved him, tells him that he was too reckless and immature to be her life partner. Divya and her parents are about to move to the United States and before leaving, she tells Sindhu that he has missed an opportunity to make it big in life.

Thereafter, all his friends decide to pursue a master's degree in science while Sindhu has to clear all his arrears to complete his bachelor degree. Sindhu finds himself alone, isolated and mocked by the villagers. In the meantime, Thamizhselvi, who refused to marry grooms for not being rich enough, finally agrees to marry a doctor when she discovers that her mother (Rajini Nivetha) has cardiovascular disease. The day of the wedding, the groom demands a huge dowry but Thamizhselvi's mother tells them that she has not that much money and the wedding is cancelled. The carefree Sindhu and arrogant Thamizhselvi who both fail in life decide to marry. Sindhu then gets an opportunity to sing in a feature film. The film ends with Sindhu and Thamizhselvi living happily.

The film score and the soundtrack were composed by film composer S. P. Boopathy. The soundtrack, released in 2005, features 5 tracks with lyrics written by Viveka, Victor Doss and Dr. Kiruthaya. [6] [7]

Mouna Ragam is a 1986 Indian Tamil-language romantic drama film written and directed by Mani Ratnam, and produced by G. Venkateswaran. The film stars Mohan and Revathi, with Karthik, V. K. Ramasamy, Ra. Sankaran, Bhaskar, Kanchana, Vani, Kalaiselvi and Sonia in supporting roles. It narrates the life of Divya (Revathi), a free-spirited college girl who is forced into an arranged marriage with Chandrakumar (Mohan) by her father. Divya, secretly mourning her former lover Manohar (Karthik) who was shot dead, did not want to be married. The story follows Divya's inner conflict between holding onto her past and coming to terms with the present and making a life with Chandrakumar.

Dharmathin Thalaivan is a 1988 Indian Tamil action-drama film directed by S. P. Muthuraman, starring Rajinikanth in dual roles, along with Prabhu, Suhasini, Kushboo, Nassar and Captain Raju in other roles. The movie is a remake of the 1978 Bollywood film Kasme Vaade in 'Sinhalese' as Nawatha Hamuwemu (1986). The film marked the debut of Kushboo in Tamil cinema. The film was declared a superhit at the box office and completed a 100-day run in many centres.

Thennavan is a 2003 Indian Tamil-language action drama film written and directed by newcomer A. M. Nandakumar and produced by Vijayakanth, who played the title role Thennavan IAS, in-charge as the Chief Election Commissioner and fight against corrupt politicians. The musical score was by Yuvan Shankar Raja. The film was released on 15 August 2003, coinciding with India's Independence Day. It was later dubbed in Telugu as Election Commissioner.

Pop Corn is a 2003 Tamil romantic drama film written and directed by Nassar, and starring Mohanlal and Simran in lead roles, and introduces newcomers Kunal Shah and Jyothi Naval. The title is short for the phrase "Pop Carnival", with a story-line focusing on why marriages between celebrities can suffer due to conflicts between egos. In July 2002 the film was reported as being "in the finishing stages."

Pandhayam is a 2008 Indian Tamil-language action thriller film directed by S. A. Chandrasekhar, starring Nithin Sathya and Sindhu Tolani while Prakash Raj, Raadhika, and Ganeshkar play supporting roles. Vijay did a guest role as himself. The music was composed by Vijay Antony. The film was released on 19 September 2008. 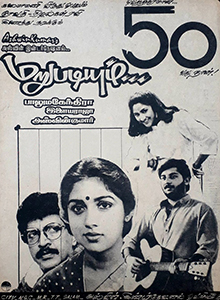 Marupadiyum is a 1993 Indian Tamil-language drama film written, filmed and directed by Balu Mahendra. The film stars Revathi, Nizhalgal Ravi, Arvind Swami and Rohini. It is a remake of the 1982 Hindi film Arth. The film focuses on Thulasi, a wife caught up in marital discord, and her life henceforth. It was released on 14 January 1993. Revathi won the Filmfare Award for Best Tamil Actress for her performance.

Sindhu Menon is an Indian film actress, who has mainly starred in Kannada, Telugu, Malayalam and Tamil films. She debuted as a child artist in the 1994 Kannada film Rashmi.

Eeram is a 2009 Indian Tamil-language supernatural crime thriller film written and directed by newcomer Arivazhagan. Starring Aadhi and Sindhu Menon in the lead roles, with Saranya Mohan and Nandha in supporting roles, the film was produced by S. Shankar. The filming of Eeram began in November 2007 and happened for nearly two years since January 2008 to June 2009, and the movie was released on 11 September 2009 to unanimously positive reviews and was declared as a super-hit blockbuster at the box office. The Telugu dubbed version was renamed as Vaishali and the dubbed version was released in November 2011. The movie was mostly shot in Chennai, Srirangam, Trichy, Coimbatore, Hyderabad, Vishakhapatnam and Pondicherry.

Nivetha Thomas is an Indian film actress who appears in predominantly Telugu, Malayalam and Tamil-language films. She is best known for Ninnu Kori, Gentleman and Darbar.

Engalukkum Kaalam Varum is a 2001 Tamil family comedy drama film directed by Balaruban. The film features Livingston and Kausalya in lead roles. The film, produced by K. Prabhakaran, had musical score by Deva and was released on 9 February 2001 to negative reviews.

Kappal is a 2014 Indian Tamil romantic comedy film directed by Karthik G. Krish, a former assistant of Shankar. Produced by I Studios Entertainment, the film features Vaibhav and Sonam Bajwa in the lead roles, while Karunakaran, Arjunan, Venkat Sundar, Karthik Priyadarshan, VTV Ganesh, and Robo Shankar, appear in supporting roles. The music was composed by Natarajan Sankaran with editing by Anthony and cinematography by Dinesh Krishnan. The film was released by Shankar's S Pictures on 25 December 2014. The movie had a dubbed Telugu release, titled Pandavulu Okkadu. The movie got mixed to positive response and become a box-office success.

As I'm Suffering from Kadhal a 2017 Indian romantic comedy web series in Tamil, created by Balaji Mohan. The series, consisting of 10 episodes, was released on 15 June 2017 by Hotstar in Hotstar Originals.

Pyaar Prema Kaadhal is a 2018 Indian Tamil-language romantic comedy film directed by Elan, and produced by Yuvan Shankar Raja, under the banner YSR Films, who also composed music for the film. Co-produced by S. N. Rajarajan under the banner K Productions. The film stars Harish Kalyan and debutant Raiza Wilson in the lead roles. The film marked the first project of both the lead actors, after rising to fame from the television series Bigg Boss Tamil. Anand Babu, Pandian, Rekha, Ramadoss and Subbu Panchu appear in supporing roles. The film's cinematography was handled by Raja Bhattacharjee, with editing done by S. Manikumaran. The film was launched on December 2017, along with the commencement of pricnipal photography and was completed in June 2018. The film released on 10 August 2018, to positive response from audience as well as critics, praising the lead actors' performances, the screenplay and the film's soundtrack. The film become a commercial success. The film won two Filmfare Awards South and two SIIMA Awards, including the Best Debut Actress Award for Raiza in both ceremonies.

Sirithal Rasipen is a 2009 Tamil comedy film directed, written and produced by V. Chandrasekaran. The film features Sathya and Sunu Lakshmi in lead roles, alongside an ensemble cast of M. S. Bhaskar, Lakshmy Ramakrishnan, Manobala, Kalpana, Mayilsamy, Lollu Sabha Balaji, Sathyan, Ansiba Hassan, Thyagu, and Shanmugarajan, amongst others, in supporting roles. The film had musical score by Iniyavan and was released on 3 July 2009. 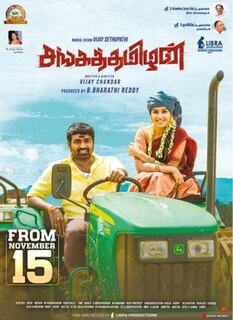 Sangathamizhan is a 2019 Indian Tamil-language action film written and directed by Vijay Chander. The film stars Vijay Sethupathi in dual roles for the first time and also Nivetha Pethuraj and Raashi Khanna in the main female lead roles while Soori, Nassar, Ravi Kishan, and Ashutosh Rana play pivotal roles. The music is composed by Vivek-Mervin, and cinematography was handled by R. Velraj. Principal photography reportedly commenced during February 2019 in Hyderabad. It is getting released as "Vijay Sethupathi" in Telugu. The film released on 15 November 2019 to mixed reviews