Thuluth (Arabic : ثُلُث, Ṯuluṯ or Arabic : خَطُّ الثُّلُثِ, Ḵaṭṭ-uṯ-Ṯuluṯ; Persian : ثلث, Sols; Turkish: Sülüs, from thuluth "one-third") is a script variety of Islamic calligraphy. The straight angular forms of Kufic were replaced in the new script by curved and oblique lines. In Thuluth, one-third of each letter slopes, from which the name (meaning "a third" in Arabic) comes. An alternative theory to the meaning is that the smallest width of the letter is one third of the widest part. It is an elegant, cursive script, used in medieval times on mosque decorations. Various calligraphic styles evolved from Thuluth through slight changes of form.

The greatest contributions to the evolution of the Thuluth script occurred in the Ottoman Empire in three successive steps that Ottoman art historians call "calligraphical revolutions":

The best known artist to write the Thuluth script at its zenith is said to be Mustafa Râkım Efendi (1757–1826), a painter who set a standard in Ottoman calligraphy which many believe has not been surpassed to this day. [8]

Thuluth was used to write the headings of surahs, Qur'anic chapters. Some of the oldest copies of the Qur'an were written in Thuluth. Later copies were written in a combination of Thuluth and either Naskh or Muhaqqaq. After the 15th century Naskh came to be used exclusively.

The script is used in the Flag of Saudi Arabia where its text, Shahada al Tawhid , is written in Thuluth.

An important aspect of Thuluth script is the use of harakat ("hareke" in Turkish) to represent vowel sounds and of certain other stylistic marks to beautify the script. The rules governing the former are similar to the rules for any Arabic script. The stylistic marks have their own rules regarding placement and grouping which allow for great creativity as to shape and orientation. For example, one grouping technique is to separate the marks written below letters from those written above.

Since its creation, Thuluth has given rise to a variety of scripts used in calligraphy and over time has allowed numerous modifications. JeliThuluth was developed for use in large panels, such as those on tombstones. Muhaqqaq script was developed by widening the horizontal sections[ clarification needed ] of the letters in Thuluth. Naskh script introduced a number of modifications resulting in smaller size and greater delicacy. Tawqi is a smaller version of Thuluth.

Ruq'ah was probably derived from the Thuluth and Naskh styles, the latter itself having originated from Thuluth.

Arabic calligraphy is the artistic practice of handwriting and calligraphy based on the Arabic alphabet. It is known in Arabic as khatt, derived from the word 'line', 'design', or 'construction'. Kufic is the oldest form of the Arabic script.

Nastaliq, also romanized as Nastaʿlīq, is one of the main calligraphic hands used to write the Perso-Arabic script in the Persian and Urdu languages, often used also for Ottoman Turkish poetry, rarely for Arabic. Nastaliq developed in Iran from naskh beginning in the 13th century and remains very widely used in Iran, India, Afghanistan and Pakistan and other countries for written poetry and as a form of art. 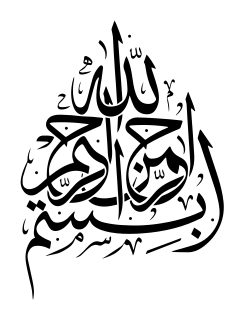 Islamic calligraphy is the artistic practice of handwriting and calligraphy, in the languages which use Arabic alphabet or the alphabets derived from it. It includes Arabic, Persian, Ottoman, and Urdu calligraphy. It is known in Arabic as khatt Arabi, which translates into Arabic line, design, or construction.

Kufic script is a style of Arabic script that gained prominence early on as a preferred script for Quran transcription and architectural decoration, and it has since become a reference and an archetype for a number of other Arabic scripts. It developed from the Arabic alphabet in the city of Kufa, from which its name is derived. Kufic script is characterized by angular, rectilinear letterforms and its horizontal orientation. There are many different versions of Kufic script, such as square Kufic, floriated Kufic, knotted Kufic, and others.

Muhaqqaq is one of the main six types of calligraphic script in Arabic. The Arabic word muḥaqqaq (محقَّق) means "consummate" or "clear", and originally was used to denote any accomplished piece of calligraphy. 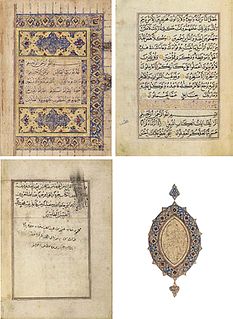 Sheikh Hamdullah (1436–1520), born in Amasya, Ottoman Empire, was a master of Islamic calligraphy.

Hijazi script, also Hejazi, literally "relating to Hejaz", is the collective name for a number of early Arabic scripts that developed in the Hejaz region of the Arabian Peninsula, which includes the cities of Mecca and Medina. This type of script was already in use at the time of the emergence of Islam. A calligraphic Hijazi script is called a Ma'il script, these are found in a number of the earliest Qur'anic manuscripts. The two terms are often used interchangeably.

Mashq is one of the oldest calligraphic forms of the Arabic script. At the time of the emergence of Islam, this type of writing was likely already in use in various parts of the Arabian Peninsula. It is first attested during the reign of caliph Umar, making it one of the earliest forms of Arabic script, along with Hijazi and Kufic. It was used in most texts produced during the first and second centuries after the Hijra.

Hâfiz Osman (1642–1698) was an Ottoman calligrapher noted for improving the script and for developing a layout template for the hilye which became the classical approach to page design.

Yaqut al-Musta'simi (Arabic: ياقوت المستعصمي) was a well-known calligrapher and secretary of the last Abbasid caliph.

Ruqʿah or Riqʿah (رِقعة) is a writing style of Arabic script intended for the rapid production of texts. It a relatively simple and plain style, used for everyday writing and often used for signs. The Ottoman calligraphers Mumtaz Efendi (1810–1872) and Mustafa Izzet Efendi (1801–1876) are credited with canonizing the writing style. 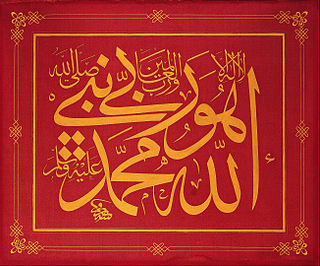 Mustafa Râkim (1757–1826), was an Ottoman calligrapher. He extended and reformed Hâfiz Osman's style, placing greater emphasis on technical perfection, which broadened the calligraphic art to encompass the Sülüs script as well as the Nesih script. 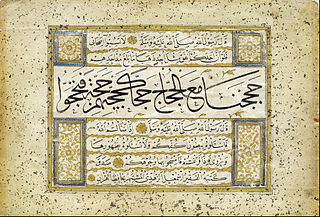 İsmail Zühdi Efendi was an Ottoman calligrapher. “Efendi” is a title of nobility, so this name can also be rendered İsmail Zühdi. 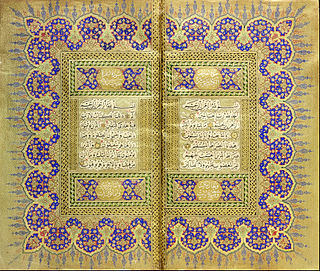 Mehmed Shevki Efendi, was a prominent Ottoman calligrapher. He is known for his Thuluth-Naskh works, and his style developed into the Shevki Mektebi school, which many contemporary calligraphers in the style take as a reference. 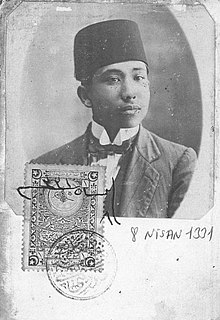 Mustafa Halim Özyazıcı was an Ottoman calligrapher and one of the last of the classic Ottoman calligraphers, using the Arabic script. He was a versatile calligrapher with a high level of expertise in many styles of script, but was widely regarded as a master Jeli Thuluth. He is most noted for his work on various restoration projects, of both manuscripts and public buildings.

Wikimedia Commons has media related to Thuluth style .
This page is based on this Wikipedia article
Text is available under the CC BY-SA 4.0 license; additional terms may apply.
Images, videos and audio are available under their respective licenses.