Thumal the Qahraman (Arabic : ثمل القهرمانة‎) (died 929) was a Muslim woman appointed in 918 as a judge in a maẓālim (secular administrative) court during the reign of Caliph al-Muqtadir (r. 908-932). She was not a Qadi (a judge adjudicating Islamic law), for she only dealt with secular law. She was put in charge of rescripting the petitions which petitioners brought to the court. [1]

Her position was an extraordinary unique position for her sex. She was appointed by Umm Jafar Muqtadir, the mother to caliph Jafar al-Muqtadir-billah (r. 908–923), the eighteen Abbasid caliph.

Thumal was originally the assistant of Shaghab, mother of Caliph al-Muqtadir. When Shaghab secured the succession of her son to the throne, she de facto seized power and appointed a parallel bureaucracy to handle state affairs. Shaghab stated that the affairs of the umma , especially justice, was better administered with a woman in charge: in 918 she appointed Thumal in charge of mazalin , in effect minister of justice or chief administrator of justice, and supervisor of the qadis, who opposed to be supervised by a woman, but was forced to accept the appointment. [2] According to the historian Tabari, Thumal carried out her duties well enough to achieve popularity among the public in her office, especially because of the new reforms which lower the cost for a plaintiff to initiate a case: however, her appointment was described in Muslim history, among others by Ibn Hazm, as one example of a series of "scandals whose equal has not been seen to this day". [2]

Al-Khayzuran bint Atta was the wife of the Abbasid Caliph Al-Mahdi and mother of both Caliphs Al-Hadi and Harun al-Rashid. She ruled from 775 to 789 during the reign of her husband and sons and is known for her immense influence on state affairs.

Abu Mansur Muhammad ibn Ahmad al-Mu'tadid, usually known simply by his regnal title al-Qahir bi'llah, was the nineteenth Caliph of the Abbasid Caliphate from 932 to 934. He was born 286 AH and died 339 AH.

Sitt al-Mulk, was a Fatimid princess. After the disappearance of her half-brother, the caliph al-Hakim bi-Amr Allah, in 1021, she was instrumental in securing the succession of her nephew Ali az-Zahir, and acted as the de facto ruler of the state until her death on 5 February 1023.

Ghaliya or Ghaliyya Al-Bogammiah was a Saudi woman who led military resistance to prevent the Ottoman recapture of Mecca during the Ottoman–Wahhabi War. She was given the title Amira, which is the female version of the title Emir, in recognition of her acts. 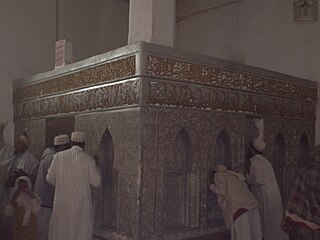 Arwa Al-Sulayhi, full name Arwā bint Aḥmad ibn Muḥammad ibn Jaʿfar ibn Mūsā Aṣ-Ṣulayḥī was a long-reigning ruler of Yemen, firstly as the co-ruler of her first two husbands and then as sole ruler, from 1067 until her death in 1138. She was the last of the rulers of the Sulayhid Dynasty and was also the first woman to be accorded the prestigious title of Hujjah in the Isma'ili branch of Shia Islam, signifying her as the closest living image of God's will in her lifetime, in the Ismaili doctrine. She is popularly referred to as As-Sayyidah Al-Ḥurrah, Al-Malikah Al-Ḥurrah (Arabic: ٱلْمَلِكَة ٱلْحُرَّة‎ or Al-Ḥurratul-Malikah, and Malikat Sabaʾ Aṣ-Ṣaghīrah. She is known by the name Arwa. However, this name does not have any historical source and all historical sources name her "Sayyidah bint Ahmed".

Abū'l-Ḥasan Mu'nis, also commonly known by the surnames al-Muẓaffar and al-Khadim, was the commander-in-chief of the Abbasid army from 908 to his death in 933 CE, and virtual dictator and king-maker of the Caliphate from 928 on.

Abu Ali Muhammad ibn Ali ibn Muqla, commonly known as Ibn Muqla, was a Persian official of the Abbasid Caliphate who rose to high state posts in the early 10th century. His career culminated in his own assumption of the vizierate at Baghdad thrice: in 928–930, 932–933 and 934–936. Unable to successfully challenge the growing power of regional emirs, he lost his position to the first amir al-umara, Ibn Ra'iq, and died in prison. He was also a noted calligrapher, inventing al-khatt al-mansūb and khatt ath-thuluth.

Subh, also known as Sobeya, Sobha, and Sabiha Malika Qurtuba, was the spouse of Caliph al-Hakam of Cordoba, and the regent of the Caliphate of Córdoba in Spanish Al-Andalus during the minority of her son, Caliph Hisham II al-Hakam.

Husayn ibn Hamdan ibn Hamdun ibn al-Harith al-Taghlibi was an early member of the Hamdanid family, who distinguished himself as a general for the Abbasid Caliphate and played a major role in the Hamdanids' rise to power among the Arab tribes in the Jazira.

Abu'l-Hasan Ali ibn Muhammad ibn Musa ibn al-Hasan ibn al-Furat was a senior official of the Abbasid Caliphate who served three times as vizier under Caliph al-Muqtadir. Ali emerged into prominence as an able fiscal administrator and deputy to his older brother Ahmad. Eventually he came to lead one of the two major and rival court factions during al-Muqtadir's caliphate, the Banu'l-Furat, the other being the group of officials around the commander-in-chief Mu'nis al-Muzaffar and the vizier Ali ibn Isa al-Jarrah.

Al-Ḫaṣṣāf was a Hanafite law scholar at the court of the 14th Abbasid Caliph al-Muhtadi.

Abu Muhammad Yahya ibn Aktham was a ninth century Arab Islamic jurist. He twice served as the chief judge of the Abbasid Caliphate, from ca. 825 to 833 and 851 to 854.

Al-hurra or al hurra was an Arabic title historically often given to, or used to referred to, women who exercised power or had a position of power or high status.

Hababah, was a jarya, slave singer and poet of the Caliph Yazid II.

Shaghab was the mother of the eighteenth Abbasid Caliph al-Muqtadir, and wielded a considerable influence over state affairs during the reign of her son. She was commonly referred to only as Umm al-Muqtadir or al-sayyida.

Dawlat Khatun was the 12th ruler of the Khorshidi dynasty in Little Lorestan in Persia in 1316.