In anatomy, the thumb extensors are:

In human anatomy, the extensor pollicis brevis is a skeletal muscle on the dorsal side of the forearm. It lies on the medial side of, and is closely connected with, the abductor pollicis longus.

The radial nerve is a nerve in the human body that supplies the posterior portion of the upper limb. It innervates the medial and lateral heads of the triceps brachii muscle of the arm, as well as all 12 muscles in the posterior osteofascial compartment of the forearm and the associated joints and overlying skin. 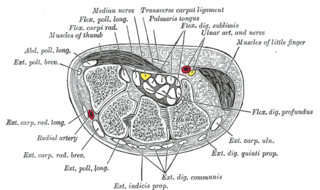 The extensor carpi radialis longus is one of the five main muscles that control movements at the wrist. This muscle is quite long, starting on the lateral side of the humerus, and attaching to the base of the second metacarpal bone.

The radius or radial bone is one of the two large bones of the forearm, the other being the ulna. It extends from the lateral side of the elbow to the thumb side of the wrist and runs parallel to the ulna. The radius is shorter and smaller than the ulna. It is a long bone, prism-shaped and slightly curved longitudinally. 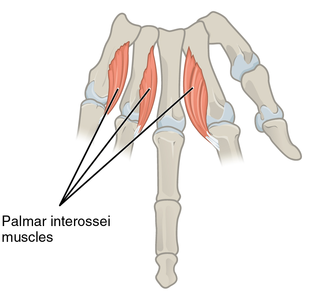 In human anatomy, the palmar or volar interossei are three small, unipennate muscles in the hand that lie between the metacarpal bones and are attached to the index, ring, and little fingers. They are smaller than the dorsal interossei of the hand. 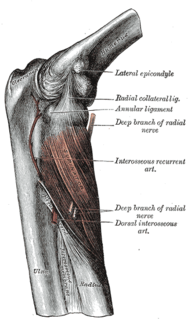 Extensor pollicis muscle may refer to: 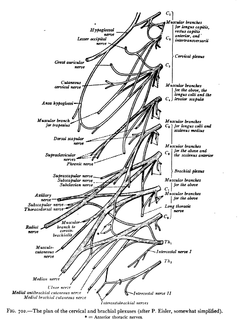 In human anatomy, a brevis muscle derives its name from the Latin brevis meaning "short", and can refer to:

Extensor brevis muscle may refer to:

Extensor longus muscle may refer to:

Pollicis brevis muscle may refer to:

Pollicis longus muscle may refer to: 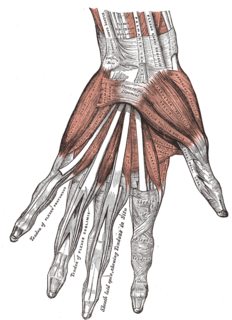 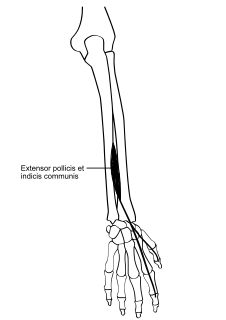 In human anatomy, the extensor pollicis et indicis communis is an aberrant muscle in the posterior compartment of forearm. It was first described in 1863. The muscle has a prevalence from 0.5% to 4%.