Thumindu Dodantenna (තුමිඳු දොඩම්තැන්න) is an actor in Sri Lankan cinema, theater and television. He is also a lecturer, screenwriter by profession. He graduated with an M.A in Drama and Theater from the University of Kelaniya, and is now a lecturer in the Department of Performing Arts at Sripalee Campus in Horana. [2] [3] He is considered as one of five actors who have dominated the Sri Lankan Stage by critics. [4]

Dodantenna started his film career with Sankara in 2007, directed by Prasanna Jayakody. In the upcoming film "Nidahase Piya DS" he plays the lead role of young DS Senanayake. 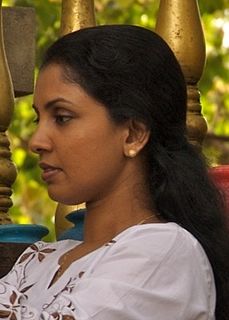 Matha is a 2012 Sri Lankan Sinhala and Tamil romantic war film directed by Boodee Keerthisena and co-produced by Ruwan Jayasingha, Sanath Ranaweera and Vijaya Rathnayake. It stars Darshan Dharmaraj and Yasodha Radhakrishnan in lead roles along with Thumindu Dodantenna and Raja Ganeshan. Music composed by Lakshman Joseph De Saram. It is the 1244th film in the Sri Lankan cinema.

Dasun Pathirana [Sinhala]), is a model and an award-winning actor in Sri Lankan cinema, theater and television. He won an award at Indie Fest 2014 as best actor in a leading role. He received his first Sarasaviya award in 2018.

Weerapullige Jayasiri [Sinhala]), popularly known as W. Jayasiri, is a Sri Lankan actor in Sri Lankan cinema, stage drama and television. Highly versatile actor from drama to comedy, Jayasiri is a multi-talented personnel that working as a script writer and lyricist.

Dulani Anuradha is a Sri Lankan Sinhaleese Film actress and a dancer by profession. She is best known for the roles in films, Aba, Vijaya Kuweni and Ahelepola Kumarihami.

Suminda Sirisena is an actor in Sri Lankan cinema, theater and television. He has played a wide range of starring or supporting roles and a recipient of Best Actor award in many local award festivals.

Merengnnage Edward Tennyson Cooray was an actor and comedian in Sri Lankan cinema and theater. One of the most popular comedians ever in Sinhala cinema with a career spanned for more than three decades, Cooray was best known for comedy roles in several blockbuster film franchises such as Re Daniel Dawal Migel, Cheriyo, Peralikarayo, Wada Bari Tarzan as well as Somy Boys. In addition to acting, he also worked as a director and scriptwriter, singer, lyrics writer.

Nikini Vassa is a 2013 Sri Lankan Sinhala drama film directed by Aruna Jayawardana and produced by Dr Kusumsiri De Silva. It stars Chandani Seneviratne and Jagath Manuwarna in lead roles along with Thumindu Dodantenna and Bimal Jayakodi. Music composed by Nadeeka Guruge. It is the 1190th Sri Lankan film in the Sinhala cinema. The film had positive reviews from international and local critics and won many international awards as well.

Lakshman Mendis is a Sri Lankan actor of film and television. He started his career in the 1994 film "Handana Kinkini" and plays a lead role in the Nidahase Piya DS(2018).

Kala Suri Kala Keerthi Keselgaspe Manatunga Jayalath Manoratne, popularly known as Jayalath Manoratne, was an award-winning actor in Sri Lankan cinema, stage drama and television. He was a lecturer by profession as well as a director and producer. A highly versatile actor from drama to comedy, Manoratne won awards at OCIC, Presidential, Sarasavi, Raigam Tele'es, Sumathi and the State Literary and Drama festivals. He was the best actor back to back in 1991 and 1992 for his performance in Socrates and Dvitva. He is considered by critics as one of the five actors who have dominated the Sri Lankan Stage. 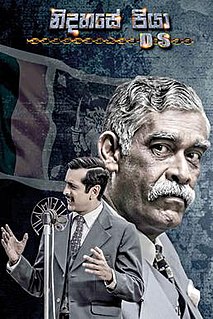 Nidahase Piya DS is a 2018 Sri Lankan Sinhala biographical film directed by Suneth Malinga Lokuhewa and co-produced by Wijeyadasa Rajapakshe, Dilman Jayaratne, Channa Hettiarachchi, Rajaputhra Weerasinghe, Kithsiri Athulathmudali and Clarance Kumarage. It stars an ensemble cast of many popular actors, with Lakshman Mendis in the lead role, with Thumindu Dodantenna and Saranga Disasekara in supportive roles. Music composed by Samantha Perera. It is the 1313th Sri Lankan film in the Sinhala cinema.

Saumya Liyanage [Sinhala]) is an actor in Sri Lankan cinema, stage drama and television. He is a senior lecturer and currently the Dean, Faculty of Graduate Studies in University of the Visual and Performing Arts by profession. Highly versatile actor mainly involved in dramatic roles, Saumya is the son of veteran dramatist Hemasiri Liyanage and brother of musician Indrachapa Liyanage.

Dharmapriya Dias is an actor in Sri Lankan cinema, stage drama and television. And a proffesional dubbing artist since 1995.Dias has titles such as playwright, actor, set designer, choreographer, teacher of art and has a master's degree in theatre and drama. He is the performing arts and sculpture art teacher in Shasthrananda Vidyalaya, Dehiwela.

Sampath Tennakoon [Sinhala]), is an actor in Sri Lankan cinema, theater and television.

U Turn is a 2019 Sri Lankan Sinhala mystery thriller film directed by acclaimed cinematographer Channa Deshapriya in his directorial debut. The movie is produced by Maharaja Entertainments as a Sirasa Movie. The movie features the stars Hemal Ranasinghe Thumindu Dodantenna, Bimal Jayakody, Gamya Wijayadasa with the debut actress Chanu Dissanayake in the lead roles. The music of the film is composed by Chinthaka Jayakody with Bharadwaj composing music for the song. The official trailer was released on 28 October 2019.

Sarath Chandrasiri [Sinhala]), is an actor in Sri Lankan cinema, theater and television. He is best known for the role "Samagipura Wasantha" in popular television serial Paba and role "Ukkuwa" in the serial Malee.