The Thunatae (Ancient Greek: Θουνᾶται) were a Dardanian tribe, along with the Galabri, mentioned by Strabo. The Thunatae are mentioned as neighbors of the Maedi, a Thracian tribe. [1]

The tribe is mentioned by Ancient Greek author Strabo in his Geographica as ΘουνᾶταιThunatai. The tribal name Thunatae/Thunatai has been connected to the Messapic name Daunioi/Daunii in Apulia (south-eastern Italy). [2]

According to Strabo the Thunatae were a Dardanian tribe who bordered with the Thracian Maedi in the east. [3] [2]

In classical antiquity, Illyria was a region in the western part of the Balkan Peninsula inhabited by numerous tribes of people collectively known as the Illyrians. Illyrians spoke the Illyrian language, an Indo-European language, which in ancient times perhaps also had speakers in some parts of Southern Italy. The geographical term Illyris was sometimes used to define approximately the area of northern and central Albania down to the Aoös valley, including in most periods much of the lakeland area. In Roman times the terms Illyria / Illyris / Illyricum were extended from the territory that was roughly located in the area of the south-eastern Adriatic coast and its hinterland, to a broader region stretching between the Adriatic Sea and the Danube, and from the upper reaches of the Adriatic down to the Ardiaei. From about mid 1st century BC the term Illyricum was used by the Romans for the province of the Empire that stretched along the eastern Adriatic coast north of the Drin river, south of which the Roman province of Macedonia began.

Taulantii or Taulantians were an Illyrian people that lived on the Adriatic coast of southern Illyria. They dominated at various times much of the plain between the rivers Drin (Drilon) and Vjosa (Aoös). Their central area was the hinterland of Epidamnos-Dyrrhachion, corresponding to present-day Tirana and the region between the valleys of Mat and Shkumbin (Genusus). The Taulantii are among the oldest attested Illyrian peoples, who established a powerful kingdom in southern Illyria. They are among the peoples who most marked Illyrian history, and thus found their place in the numerous works of historians in classical antiquity.

Gentius was an Illyrian king who belonged to the Labeatan dynasty. He ruled in 181–168 BC, being the last attested Illyrian king. He was the son of Pleuratus III, a king who kept positive relations with Rome. The capital city of the Illyrian kingdom under Gentius was Scodra.

In Roman literature of the early 1st century CE, the Moesi appear as a Paleo-Balkan people who lived in the region around the River Timok to the south of the Danube. The Moesi don't appear in ancient sources before Augustus's death in 14 CE and are mentioned only by three authors: Ovid, Strabo and Livy. Recent research suggests that a Paleo-Balkan people known as the Moesi never actually existed but the name was transplanted from Asia Minor to the Balkans by the Romans as an alternative name for the Dardani, a people who lived in the later province of Moesia. This decision in Roman literature is linked to the appropriation of the name Dardani in official Roman ideological discourse as Trojan ancestors of the Romans and the creation of a fictive name for the actual Dardani who were seen as barbarians and antagonists of Rome in antiquity.

Rhizon was a city in classical and Roman antiquity. Rhizon is the oldest settlement in the Bay of Kotor and the modern town of Risan stands near the old city. Originally it was an Illyrian settlement that developed gradually and became the capital of the Illyrian Ardiaean Kingdom under Agron and Teuta. It was the last stronghold of queen Teuta in the first Illyrian war against the Romans. It maintained its status as a significant regional settlement well into the Roman era. 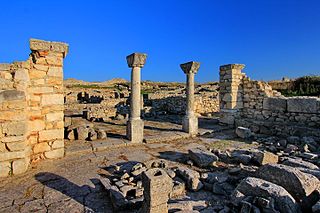 Byllis or Bullis or Boullis (Βουλλίς) was an ancient city and the chief settlement of the Illyrian tribe of the Bylliones, located in the transboundary region between southern Illyria and Epirus. The remains of Byllis are situated north-east of Vlorë, 25 kilometers from the sea in Hekal, Fier County, Albania. Byllis was designated as an archaeological park on 7 April 2003 by the government of Albania.

The Kingdom of Dardania was a polity formed in the central Balkans in the region of Dardania during classical antiquity. It is named after the Dardani, a Paleo-Balkan tribe which formed its population and formed the core of the Dardanian polity. Dardania included present-day Kosovo, northwestern North Macedonia, parts of the Raška region and area of Naissus in Serbia and the Kukës County in Albania. The eastern parts of Dardania were at the Thraco-Illyrian contact zone. Inhabited by ethnic Thracians and Illyrians, the kingdom eventually became part of the Roman Empire, first as the province of Moesia and then the province of Dardania.

The Bylliones were an Illyrian tribe that lived near the Adriatic coast of southern Illyria, on the lower valley of the Aoös river, in the hinterland of Apollonia. The Bylliones were firstly attested in epigraphic material from the oracle of Dodona dating back to the 4th century BC, and their koinon was firstly attested in a 3rd century BC inscription from the same oracle. Their territory was trapezoidal on the right side of the rivers Luftinje and Aoös, extending in the west to the Mallakastra mountains. The chief city of their koinon was Byllis. Another important centre of their koinon was Klos, an earlier Illyrian settlement later called Nikaia, as an inscription attests. The Bylliones also inhabited in the area of an ancient sanctuary of the eternal fire called Nymphaion.

Illyrian Kingdom is the name of a country that existed on the Western part of the Balkan Peninsula in ancient times and represented an alliance of Illyrian tribes.

The Galabri were a Dardanian tribe, along with the Thunatae, mentioned by Strabo.

The Dassareti were an Illyrian people that lived in the inlands of southern Illyria, between present-day south-eastern Albania and south-western North Macedonia. Their territory included the entire region between the rivers Asamus and Eordaicus, the plateau of Korça locked by the fortress of Pelion and, towards the north it extended to Lake Lychnidus up to the Black Drin. They were directly in contact with the regions of Orestis and Lynkestis of Upper Macedonia. Their chief city was Lychnidos, located on the edge of the lake of the same name.

The Labeatae, Labeatai or Labeates were an Illyrian people that lived on the Adriatic coast of southern Illyria, between modern Albania and Montenegro, around Lake Scodra.

Atintanes or Atintanians was an ancient tribe that dwelled in the borderlands between Epirus and Illyria, in an inland region which was called Atintania. They have been described as either an Epirote tribe that belonged to the northwestern Greek group, or as an Illyrian tribe. They were occasionally subordinate to the Molossians.

The Enchelii, the inhabitants of Enchele, were an ancient people that lived around the region of Lake Shkodra and Lake Ohrid, in modern-day Albania and North Macedonia. They are one of the oldest known peoples of the eastern shore of the Adriatic. In ancient sources they sometimes appear as an ethnic group distinct from the Illyrians, but are mostly mentioned as one of the Illyrian tribes.

Pleuratus III was a ruler of the Illyrian kingdom under the Labeatan dynasty. He was the son of Scerdilaidas. Pleuratus continued his father's pro-Roman policy even more decidedly, so much that his loyalty to Rome was well known, even to other dynasts. He managed to extend the boundaries of the Illyrian State in the south when he was rewarded land annexed by Philip V of Macedon. He became one of the most prominent Illyrian kings of the time all because of his loyalty to the Romans. Pleuratus was succeeded by his son Gentius, who was the last Illyrian king.