Park Sang-hyun was born in Busan, South Korea, but grew up in the Philippines. He has two elder sisters, Sandara and Durami. Aside from his native Korean, he is also fluent in English and Tagalog, and can speak conversational Mandarin and Japanese.

His eldest sister, Sandara, achieved nationwide fame in the Philippines in 2004 after becoming the runner-up on the first season of Star Circle Quest , a talent search reality competition. He first appeared on national television when he attended the finale with his mother. Later on, as his sister began her hectic activities as a celebrity, a crew from one of South Korea's biggest television agencies recorded her daily life in the documentary My Name Is Sandara Park. This marked Thunder's first ever appearance on South Korean television.

Sandara's eventual decision to pursue activities in their home country led to their family's return to South Korea in 2007. By this time, Thunder had finished secondary education in the Philippines. It was later on revealed in a magazine interview that he had originally decided to pursue a professional career as a soccer player, specifically as a midfielder. He gave up and instead started auditioning for entertainment agencies, one of which was JYP Entertainment. He had taken dancing workshops offered by Sandara's home network back in the Philippines.

Thunder eventually became a trainee under LOEN Entertainment, where he met IU. He appeared in IU's debut music video for her song "Lost Child" and was also seen in a couple of videos with her wherein they sing Big Bang's "Lies" and Super Junior's "Sorry Sorry."

Thunder, Seung-ho, G.O, Lee Joon and Mir made their debut as MBLAQ on October 9, 2009 at Rain's Legend of Rainism concert where they performed various songs from their then-unreleased single album Just BLAQ . [9] [10] On October 14, MBLAQ officially released their debut single album Just BLAQ, along with the "Oh Yeah" music video. [11] A day later, MBLAQ had their debut stage with their title song "Oh Yeah" on Mnet's M! Countdown . [12] Also in October, he was featured in Lyn's "New Celebration" music video. [13] In November, he starred in a commercial film with Wonder Girls for Cafe Mori. [14]

Because of his androgynous face and modelesque image he was featured in Elle Girl's February 2010 issue. He was given a 4-page spread, where he showed off his unique yet fashionista chic image. [15] In March 2010, Thunder alongside U-KISS' Dongho and Eli and Shinee's Key hosted a new variety show called Raising Idol. [16] In March 2010, he also appears in K.Will's "Gift" music video. [17] Thunder also participated in Mnet's Mnet Scandal. [18] He was also a host of The M-Wave, a music program which aired on Arirang TV with Krystal Jung. [19] [20] Having lived in the Philippines, he participated in the cable TV show, Mom, I've gone crazy for English with Nicole Jung, where he was an English mentor to young children. [21] In 2010, Thunder was also chosen to become Alba Heaven spokesperson. It is a job search site, focusing on connecting users who want part-time jobs with potential businesses and employers, he participated in a TV CF which was broadcast on the airwaves. [22]

In 2011, Thunder was made a permanent cast member of the KBS show Imagination Arcade. [23] He was featured in a six-page spread on the October issue of Singles, showing a completely different image. [24] In December 2011, Thunder had a cameo role in jTBC drama Padam Padam where he played the role of Yang Kang-woo, the older brother of Yang Kang-chil (played by Jung Woo-sung). [25]

In 2012, he was featured in two magazines: he posed shirtless for the March issue of Harper's Bazaar [26] and the April issue of L'Officiel Hommes Korea; [27] both were an eight-page spread. Also in April, Wanna Girls magazine named him as new fashionista icon of 2012, along with Jessica Jung, Hyomin and Yong Jun-hyung. In July 2012, Thunder released a self-composed solo song titled "Don't Go" for "The BLAQ% Tour" album. [28] In October, Thunder started his career in runway as he walked for Lee Jae-ho's Coexistence Collection in S/S 2013 Seoul Fashion Week. [29] In November, he walked for Korean designer Park Jong-cheol's fashion show 'Bling Bling Party' as part of SUNY Korea Festival. [30]

In January 2013, Thunder was cast as the male lead in the MBC drama Nail Shop Paris, with Park Gyu-ri. [31] In 2014, he was cast in the dance musical Moon Night, along with Seung-ho and Two X's Jiyou. In 2014, Thunder released his first single "Gone" which he composed himself. [32] In March 2014, Thunder had graced the runway again for designer Lie Sang Bong's fashion show in 2014 F/W Seoul Fashion Week. [33] He released his second single "Monster" later that year. [34] On December 16, 2014, Thunder and Lee Joon officially withdrew from the group after their contracts expired. [8]

2015–present: Return to acting and Thunder

In 2015, he was cast in the role of Kang Hyun-seo in the MBC drama Make a Woman Cry . Starting with this drama, he is being credited by his birth name (except for music-related projects). In 2016, he made a cameo appearance on another MBC drama, Woman with a Suitcase , as Cheondung, a lawyer interviewing for the same job as Ma Seok-woo (played by Lee Joon).

On November 23, 2016, Mystic Entertainment revealed that Thunder would release new music in December. His self-titled debut extended play as a solo artist was released on December 7, 2016 and featured guest appearances by Goo Hara, Basick and Giantpink. Thunder participated in writing and composing all five tracks. The music video for the promotional single "Sign" features his sister Sandara. [35] On February 6, 2017, it was announced that Thunder would be the first Korean idol to star in a Korean-Indonesian movie, titled Forever-Holidays in Bali. [36] On April 19, before going over to Bali to film the movie, Thunder appeared in Indonesian music show "Dahsyat" to perform. [37] It was a huge success with the hashtag #ThunderOnDahsyat trending second on Indonesian Twitter that morning. [38]

Sandara Park, also known by her stage name Dara, is a South Korean singer, actress and television presenter. She rose to fame in the Philippines as a contestant on the talent show Star Circle Quest in 2004, after which she had a successful acting and singing career before returning to South Korea in 2007. She made her South Korean debut in 2009 as a member of the K-pop group 2NE1, which went on to become one of the best-selling girl groups of all time before their disbandment in 2016.

J. Tune Entertainment was a Korean music record label founded in November 2007 by Rain. It was a subsidiary of JYP Entertainment.

MBLAQ is a South Korean boy band created by South Korean singer Rain under J. Tune Camp. The group consists of Seungho, G.O, and Mir, and formerly Lee Joon and Thunder. The group debuted on October 15, 2009, at Rain's Legend of Rainism concert.

Kim Hyung-soo, better known by his stage name K.Will (Korean: 케이윌), is a South Korean singer. The name is a combination of the first letter 'K' of his last name 'Kim' and the English word 'Will', which means will. He debuted in 2007 and has since become known for his chart-topping ballads. He has also been dubbed the "Prince of OST" for his frequent Korean drama soundtrack appearances. 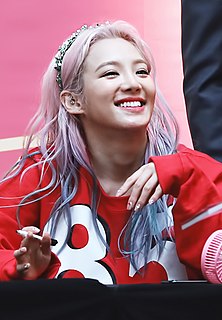 Kim Hyo-yeon, referred to as Hyoyeon or DJ Hyo, is a South Korean singer, dancer, DJ, and television personality. She debuted as a member of the girl group Girls' Generation in August 2007, which went on to become one of the best-selling artists in South Korea and one of the most popular K-pop groups worldwide. She has since participated in other SM Entertainment projects, including Girls' Generation-Oh!GG and Got the Beat. Since 2016, she has also released singles as a solo artist. 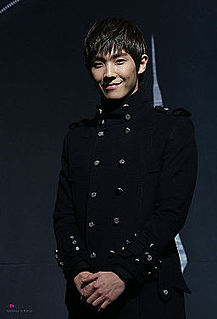 Lee Chang-sun, better known by his stage name Lee Joon, is a South Korean actor, singer, model and DJ. He is best known as a former member of the South Korean boy band MBLAQ. He had notable roles in The Silent Sea (2021), Gapdong (2014), My Father Is Strange (2017) and Bulgasal (2021) 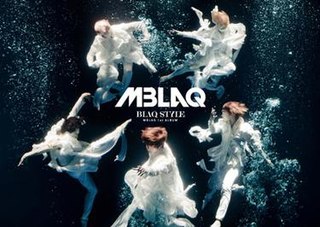 BLAQ Style is the first full-length album by South Korean boy band MBLAQ, and was released by J.Tune Camp on January 10, 2011 at 11 AM KST. MBLAQ's title songs will include "Stay" and "Cry". A re-release of the album, retitled BLAQ Style - 3D Edition, was released on February 22, 2011. Consisting a total of 16 tracks, the album contains the 13 tracks from BLAQ Style, as well as 3 new tracks. Two of the three new tracks included MBLAQ's participation in its production. The track "돌아올 수 없는 " was composed by G.O and the lyrics were written by Mir, while the song titled You was written and composed by Cheon Doong.

Yang Yo-seob, more commonly known as Yoseob, is a South Korean singer and musical actor. He is the main vocalist of the boy group Highlight.

The following is the discography of the South Korean dance-pop boy group MBLAQ which consists of one studio album, eight extended plays (EPs), two compilation albums, and twenty-one singles. MBLAQ have been in the music business ever since making their live debut on Mnet's M! Countdown with their debut track, "Oh Yeah" on October 14, 2009. 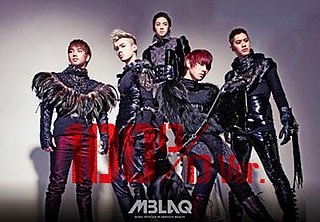 100% Ver. is the fourth EP released by South Korea boy band MBLAQ. The album was released online on January 10, 2012. The online pre-orders started on January 10, 2012. It was recently revealed that 100% Ver. had over 40,000 pre-orders. The album consists of five new tracks, and the title track This Is War is a Dance Ballad with Orchestra Music. On March 21, the EP was re-released under the name "BLAQ% Ver.". The song "100%" was supposed to be the title track of the re-release, but the group will not promote the song to focus on solo activities.

Jung Byung-hee, better known by his stage name G.O (Korean: 지오), is a South Korean singer-songwriter and actor. He is best known as a member of South Korean boy band MBLAQ.

BLAQ Memories is a compilation album released for the Japanese market. The album consists of MBLAQ's Korean songs, as well as a Japanese version of "You're My +". The album was released on March 7, 2012. Upon its release, the album landed at #9 on the Oricon Daily chart 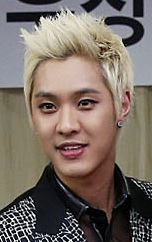 Broken is the sixth EP released by the South Korean boy group MBLAQ. The album was released online on March 24, 2014 at 12PM (KST). The album consists of 7 tracks, and Wheesung took part in the writing of the lyrics and composing for the title song Be a Man, whereby he gifted the song to MBLAQ. He expressed that "MBLAQ is the only male group that I wanted to give a song to, so it was a pleasure to work with them on the album. I am thankful for MBLAQ for conveying the feelings that I wanted from this track".

Shin Hye-jeong, better known mononymously as Hyejeong, is a South Korean singer and actress. She is best known as a member of the South Korean girl group AOA. 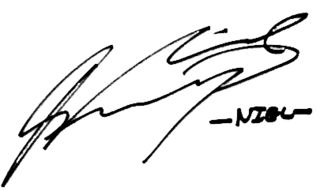 Ahn Daniel, better known by his stage name Niel, is a South Korean singer, songwriter and actor. He is best known as a member of the South Korean boy group Teen Top. Niel released his first EP titled oNiely on February 16, 2015.

Winter is the seventh EP released by the South Korean boy group MBLAQ, in time to suit the approaching Winter season. The album was released online on November 25, 2014 at 12AM (KST) and offline on November 26, 2014. The album consists of 5 tracks, and all the tracks included in the album are self-composed ballad songs by the members themselves.

Han Sang-hyuk, better known by his stage name Hyuk (Korean: 혁), is a South Korean singer and actor. Hyuk debuted as a member of the South Korean boy group VIXX in May 2012, and began his acting career in 2016 in the comedy-action film Chasing as Han Won-tae.

Bang Cheol-yong, better known by his stage name Mir, is a South Korean singer, rapper, dancer, and actor. He is a member of guy group MBLAQ. He enlisted in the army on 2016. He was discharged in July 2018.