FV Thunder was an outlaw fishing vessel sunk in 2015. [1] The ship was built in 1969 in Norway and has gone by many names, including: Vesturvón, Arctic Ranger, Rubin, Typhoon I, Kuko, and Wuhan N4. [1] The Thunder was part of the "Bandit 6", a group of six fishing vessels that illegally fished for Patagonian toothfish in the Southern Ocean. The ship was last registered in Lagos, Nigeria; however, the ship was officially de-listed by Nigeria a week before she sank. [2]

At the time of her sinking, the crew consisted of 30 Indonesians and 10 officers from Spain, Chile, and Portugal, who were turned over to the authorities in São Tomé and Príncipe. [2] The officers of the crew were later tried and convicted of several illegal fishing offences. The captain, Luis Alfonso Rubio Cataldo of Chile, was given a three-year sentence. The ship's chief engineer, Agustín Dosil Rey of Spain, was given a two-year and nine-month sentence. The ship's second mechanic, Luis Miguel Pérez Fernández of Spain, was given a two-year and eight-month sentence. Together, they were fined a total of over $17 million. [3] Interpol believes that the vessel was part of a fleet of six operating through shell corporations under Vidal Armadores, a company based in Spain. [3] [4]

The pursuit of Thunder lasted 110 days, [5] breaking the previous record of 21 days, set by the Australian patrol vessel Southern Supporter in her pursuit of Viarsa 1 in 2003. [10] The Sea Shepherd Conservation Society (SSCS) is a non-profit, marine conservation activism organization based in Friday Harbor on San Juan Island, Washington, in the United States. Sea Shepherd employs direct action tactics to achieve its goals, most famously by deploying its fleet of ships to track, report on and actively impede the work of fishing vessels believed to be engaged in illegal and unregulated activities causing the unsustainable exploitation of marine life.

Paul Franklin Watson is a Canadian-American conservation and environmental activist, who founded the Sea Shepherd Conservation Society, an anti-poaching and direct action group focused on marine conservation activism. The tactics used by Sea Shepherd have attracted opposition, with the group accused of eco-terrorism by both the Japanese government and Greenpeace. Watson is a citizen of Canada and the United States. 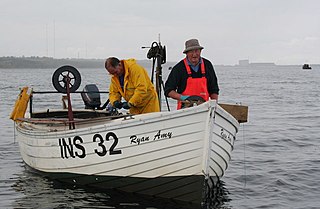 Longline fishing, or longlining, is a commercial fishing angling technique that uses a long main line with baited hooks attached at intervals via short branch lines called snoods or gangions. A snood is attached to the main line using a clip or swivel, with the hook at the other end. Longlines are classified mainly by where they are placed in the water column. This can be at the surface or at the bottom. Lines can also be set by means of an anchor, or left to drift. Hundreds or even thousands of baited hooks can hang from a single line. Longliners – fishing vessels rigged for longlining – commonly target swordfish, tuna, halibut, sablefish and many other species.

The Antarctic toothfish is a species of notothen native to the Southern Ocean. It is often mistakenly referred to as an Antarctic cod, consistent with the misnaming of other notothenioid Antarctic fish as rock cods. However, notothenioid fishes are not closely related to cods, which are in another taxonomic order, the Gadiformes. The generic name Dissostichus is from the Greek dissos (twofold) and stichus (line) and refers to the presence of two long lateral lines, which are very important to the species’ ecology. The common name "toothfish" refers to the presence of biserial dentition in the upper jaw, thought to give it a shark-like appearance. The habitat of the Antarctic toothfish is in subzero degree water below latitude 60°S. 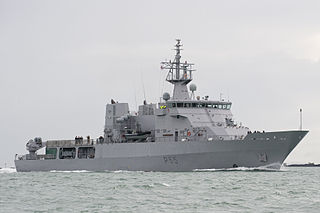 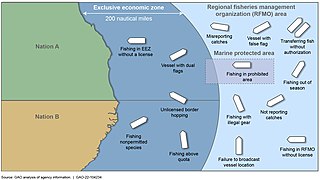 Viarsa 1 was a Uruguayan-flagged fishing vessel famous for its involvement in a high seas chase.

The MV Oceanic Viking was an armed patrol vessel of the Australian Customs Service. Originally built in 1996 as the offshore supply vessel Viking Lady for Norwegian shipping company Eidesvik Shipping AS, the ship was converted into a cable layer in 2000 and renamed Oceanic Viking. The ship was chartered to the Australian Customs Service through P&O Marine Services from 2004 to 2010. In 2011, it was purchased by A&P Tyne, Isle of Man, and renamed European Supporter. 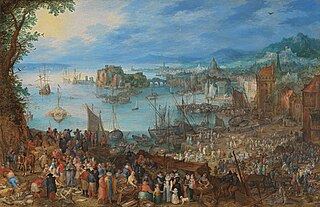 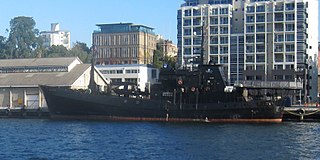 The MY Bob Barker is a ship owned and operated by the Sea Shepherd Conservation Society, named after American television game show host and animal rights activist Bob Barker, whose donation of $5 million to the society facilitated the purchase of the ship. She began operating for the group in late 2009 / early 2010 in its campaign against whaling by Japanese fisheries. In October 2010, Sea Shepherd stated that Bob Barker had completed a major refit in Hobart, Tasmania. Hobart is now the ship's honorary home port. 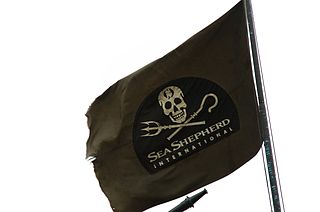 The Sea Shepherd Conservation Society engages in various demonstrations, campaigns, and tactical operations at sea and elsewhere, including conventional protests and direct actions to protect marine wildlife. Sea Shepherd operations have included interdiction against commercial fishing, shark poaching and finning, seal hunting and whaling. Many of their activities have been called piracy or terrorism by their targets and by the ICRW. Sea Shepherd says that they have taken more than 4,000 volunteers on operations over a period of 30 years.

The Bandit 6 was a group of six vessels which were illegally fishing Patagonian toothfish in the Southern Ocean. Actions by the Sea Shepherd Conservation Society and national governments resulted in all six vessels being detained or sunk.

PSS Remeliik is a Pacific Forum-class patrol boat, designed and built in Australia, and donated to Palau, to help the nation patrol its exclusive economic zone. 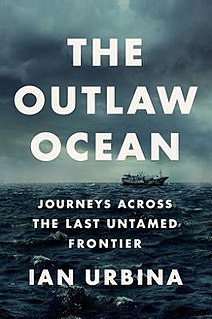 The Outlaw Ocean: Journeys Across the Last Untamed Frontier is a 2019 book by Ian Urbina about crime and extralegal activity in international waters. The book was based on an investigate journalism series Urbina wrote for The New York Times. Topics covered include illegal, unreported and unregulated fishing, modern slavery and violent crime committed at sea, as well of the work of organisations, governments and companies in international waters. The book was critically acclaimed. 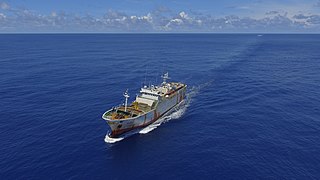 Andrey Dolgov is a former long-line fishing boat. During the 2000s and 2010s, the ship—which was engaged in a far-reaching campaign of illegal fishing—was one of Interpol's most wanted ships. The Andrey Dolgov was captured and detained by the Indonesian navy in April 2018; the Indonesian government now intends to refurbish the ship and incorporate it into Indonesia's fisheries enforcement fleet.